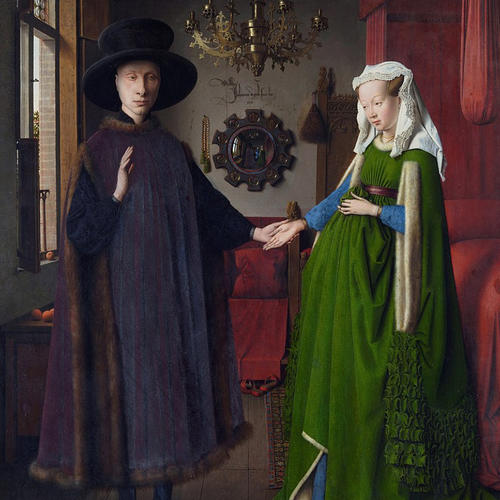 Before oil paint, European artists were at the mercy of eggs. That's because egg tempera was the reigning technique before oil painting busted onto the scene. If you’ve ever looked at a medieval painting and thought it looked a little stiff, it’s because egg tempera dries quickly and must be applied using small cross hatching marks. Oil paint, however, changed the game. Unlike egg tempera, oil paint offered artists a wider array of technical applications. Its sumptuous texture and slow drying time make it easily malleable for artists to create an inexhaustible variety of effects. It can be applied translucently as fine glazes or thickly with a palette knife. Oil paint allows artists a greater freedom of expression, which makes it highly desirable (with the added bonus of not smelling like old eggs).

Essentially, oil paint is crushed rocks mixed with, you guessed it, oil. Oil paint is made by mixing finely ground pigment and oil—usually linseed, walnut, or poppy— which is then applied to a prepared surface. Like most things, oil painting does not have an exact date of invention nor one inventor credited with its discovery.  The oldest oil paintings currently dated are located in the ancient Bamiyan caves in Afghanistan and date all the way back to the 7th century CE. These murals display a wide range of pigment colors and even a varnishing top layer. This refinement of technique is a good sign that oil paint had already been in use for some time, so although these are the oldest oil paintings yet discovered, there were most likely many predecessors.

However, according to the Italian Renaissance’s favorite art historian and storyteller (who must be taken with a huge grain of salt), Giorgio Vasari, it’s the Flemish painter Jan van Eyck who deserves credit for the invention of oil paint in the early 1400s. Vasari did not, and probably would not want to, know about the existence of the Bamiyan caves, because his Western-centric (i.e., white, male) fantasy about van Eyck effectively popularized the technique of oil painting in Europe.

So what made van Eyck's oil painting technique so distinctive and influential? By layering transparent glazes of oil paint over his egg tempera underpaintings, he was able to create the depth of color and subtle detail that defines the style of Northern Renaissance painting. This technique is called glazing. Glazing allows light to penetrate the translucent layers of paint and reflect off of the white surface underneath to create a radiance that is particular to oil painting. Take it up with Vasari, the self proclaimed only historical source on the origins of oil painting, about whether or not van Eyck actually invented this process.

Oil painting spread south from Northern Europe to Italy, where it continued to progress. In the late 1400s, Giovanni Bellini popularized oil painting in Venice. Although he used a tempera underpainting, his paintings are some of the first examples of impasto or wet-on-wet painting. In the way of artistic apprentices throughout time, Bellini’s student, Titian, broke away from the established techniques passed down from his teacher by leaving rough brushstrokes and texture visible on the surface of his work. This effect brought attention to the process of painting itself, which would eventually lead to the more expressive and immediate techniques used by artists such as his own rebellious student, Tintoretto.

By the end of the 16th century oil paint had completely eclipsed tempera as the preferred medium for Western European artists. As its popularity grew, so did ingenuity. The invention of new pigments gave artists access to brighter and more saturated paints. With the advent of pre-mixed and tubed paint in the 1800s came even more possibilities. It’s thanks to tubes that painting became relatively convenient for artists such as Claude Monet to paint en plein air— in other words, outside—giving way to French Impressionism. Monet’s brushstrokes capture movement and time in his paintings with a focus on color and texture rather than realism.

Due to its amazing versatility and durability, oil paint remains one of the most popular art mediums in the world to this day. Contemporary oil painters experiment with techniques old and new to achieve their artistic visions. Gerhard Richter uses a giant squeegee to blur his paintings, drawing a connection between photography and painting. Jay DeFeo layered tons and tons of paint to her surface, creating sculptural oil paintings that may never dry. Oil paint can be sculpted, scraped, stippled, splattered, and squeegeed. What started as simply crushed rocks and oil has opened up a world of endless possibilities and countless innovative techniques. The appeal of oil paint is that it maintains inherent historical implications while still continuously evolving. Save eggs for breakfast: become an oil painter.

What does the Arnolfini Portrait represent? I have an essay for class and need help!

I tried oil paints once, it was theeee worst!

I find it easier to add saturation to my colors as I bring these layers of depth forward on the canvas.

I know how not to be bored now -- get into mixing oil paints!

Thanks for sharing, I will look into the next posts, and will follow your new work.

I hate using oil paint. It takes forever to dry.

I am so intimidated by oils there's no way you could pay me to use them.

I loved learning about the history of oil paint and how it’s made! Wonderful article!

Oh my god! So helpful. I love this.