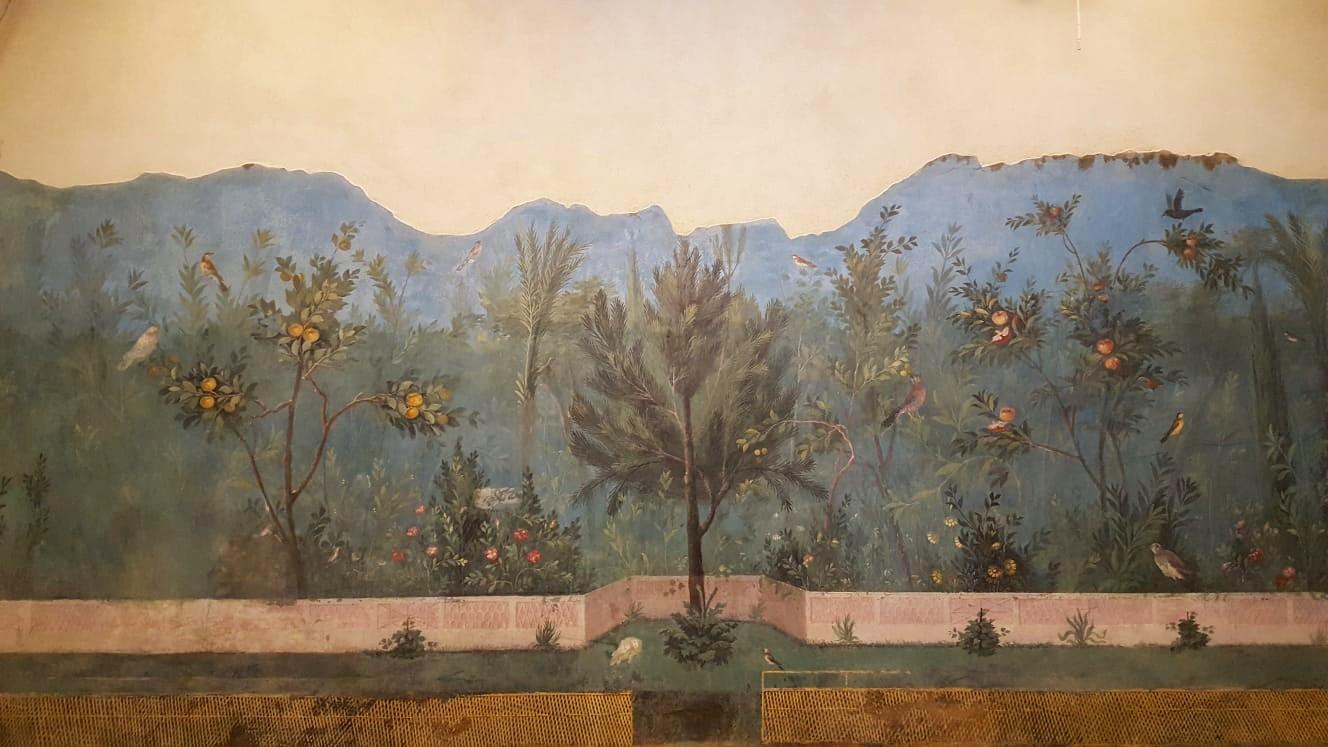 As the neurologist Oliver Sacks noted, gardens are places of healing. The Greek root of therapy could mean cultivating the land, and so Sacks wrote that “in many cases, gardens and nature are more powerful than any medication.” Perhaps for that reason artists have felt themselves drawn to gardens: they offer a balm, a place to rest and reflect on time, eternity, and beauty. If we survey gardens in art, we see that different peoples and cultures have venerated them for a greater sense of personal wholeness and belonging, for feeling connected to the natural world and the world beyond.

Classical Gardens: The Garden of Livia

Livia Drusilla, the wife of Octavian, later Emperor Augustus, commissioned artists to create an imaginary frescoed garden underneath her villa outside Rome. Legend has it that Livia was inspired to build the villa around the time of her marriage, when an eagle dropped a white hen in her lap (a wedding present difficult to return). The hen had a laurel branch in its beak, and Livia took the care to cultivate both the hens and the laurel. The artists in turn decorated the four walls of the underground chamber with laurels and twenty-two other species of plants, and also dispersed images of poultry and five dozen other birds among their foliage. Livia found repose in this 20x40-foot painted garden, a shelter not only from the summer heat but also from the burdens of being wife to one emperor and mother to another (Tiberius, who hated her, but that’s another story). One of the wonders of this work is that it was painted underground, with no natural illumination, yet it captures the sights, sounds, and fragrances of an idealized natural world. 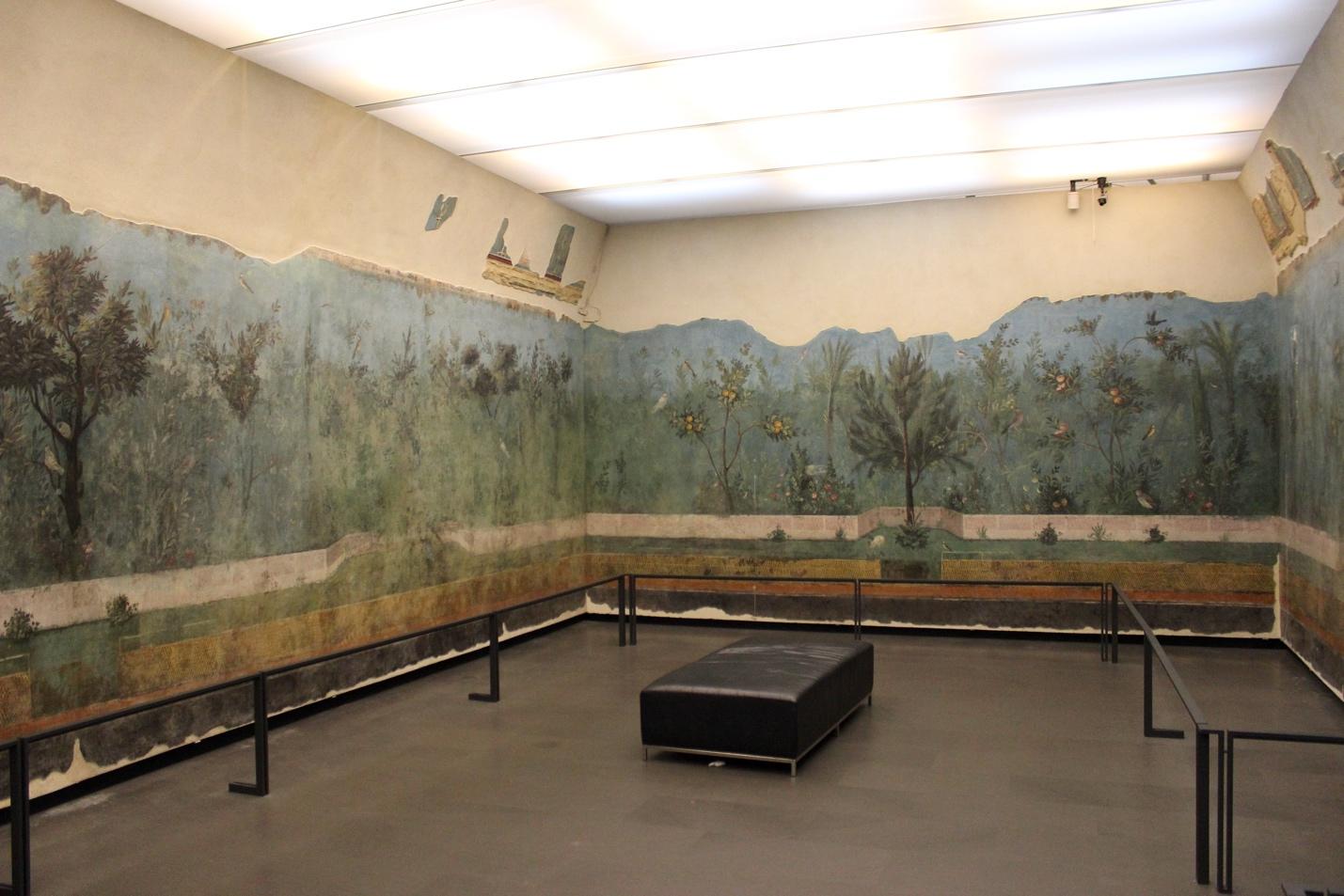 Large view of Fresco from the Garden of Livia Drusilla. Source. 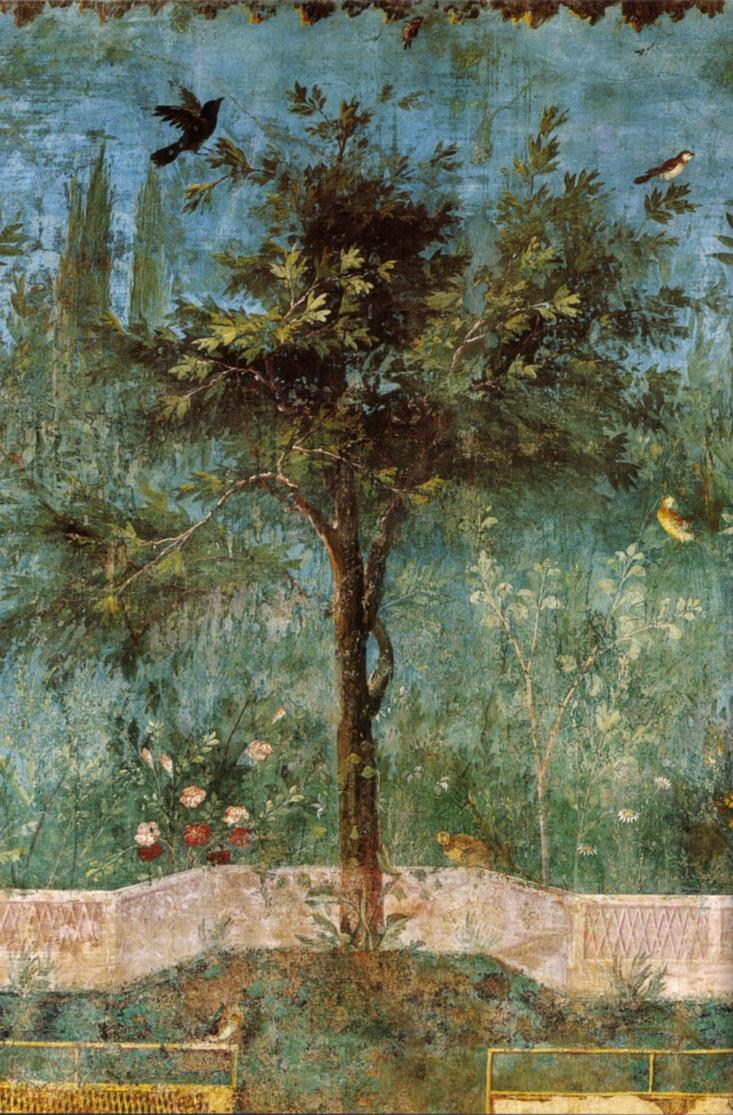 Detail from Fresco from the Garden of Livia Drusilla, South Wall. Source.

During the Middle Ages and Renaissance, gardens alternated as places of spiritual serenity, sensual pleasure, and suffering: they represented different aspects and possibilities of Christian life. Mary, when she hears the angel Gabriel hailing her as the mother of Jesus, often sits in a walled garden with a book before her. The closed or walled garden – in Latin, hortus conclusus – signifies Mary’s virginity as well as her quiet introspection, her seclusion from outside noise and distraction. On example is the scene from the monastery of San Marco in Florence by Fra Angelico: 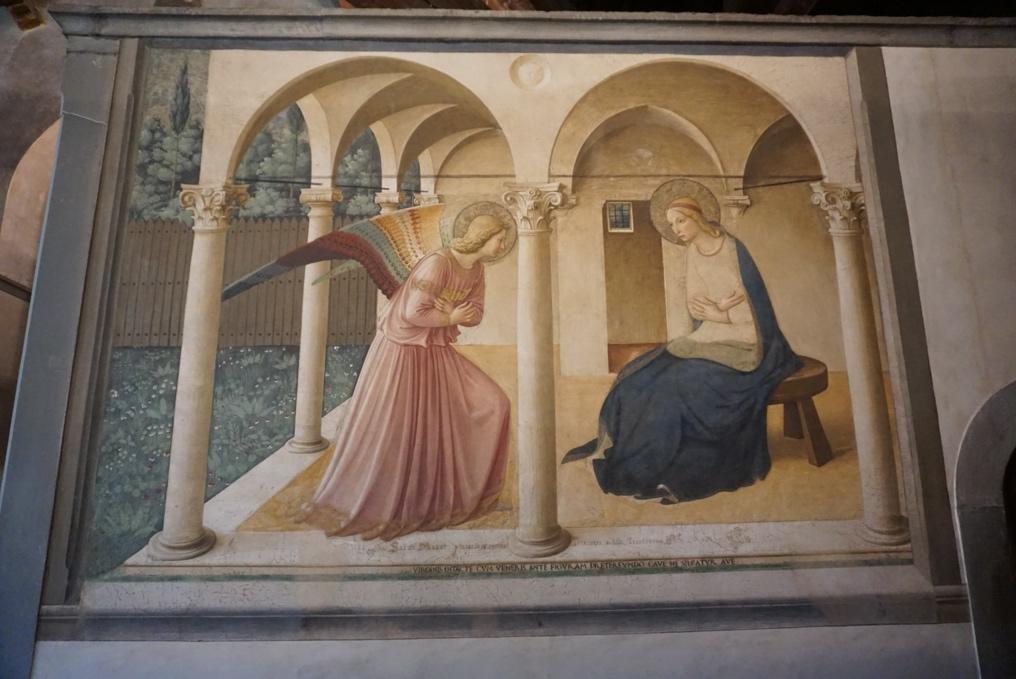 The young Leonardo developed his feeling for the intimacy of the encounter in this painting, which viewers still experience today:

In the sermons and writings of the time Mary comes forth as a second Eve: Eva in Latin is reversed by Ave, “hail,” Gabriel’s first word to her (in Church Latin, not her native Aramaic!). So Mary reverses the fall of Adam and Eve, who were of course in their own garden of Eden. Artists like Rubens and Jan Brueghel the Elder portray this garden as a lost utopia of pleasure, with peaceful frolicking animals and the original nudist camp. 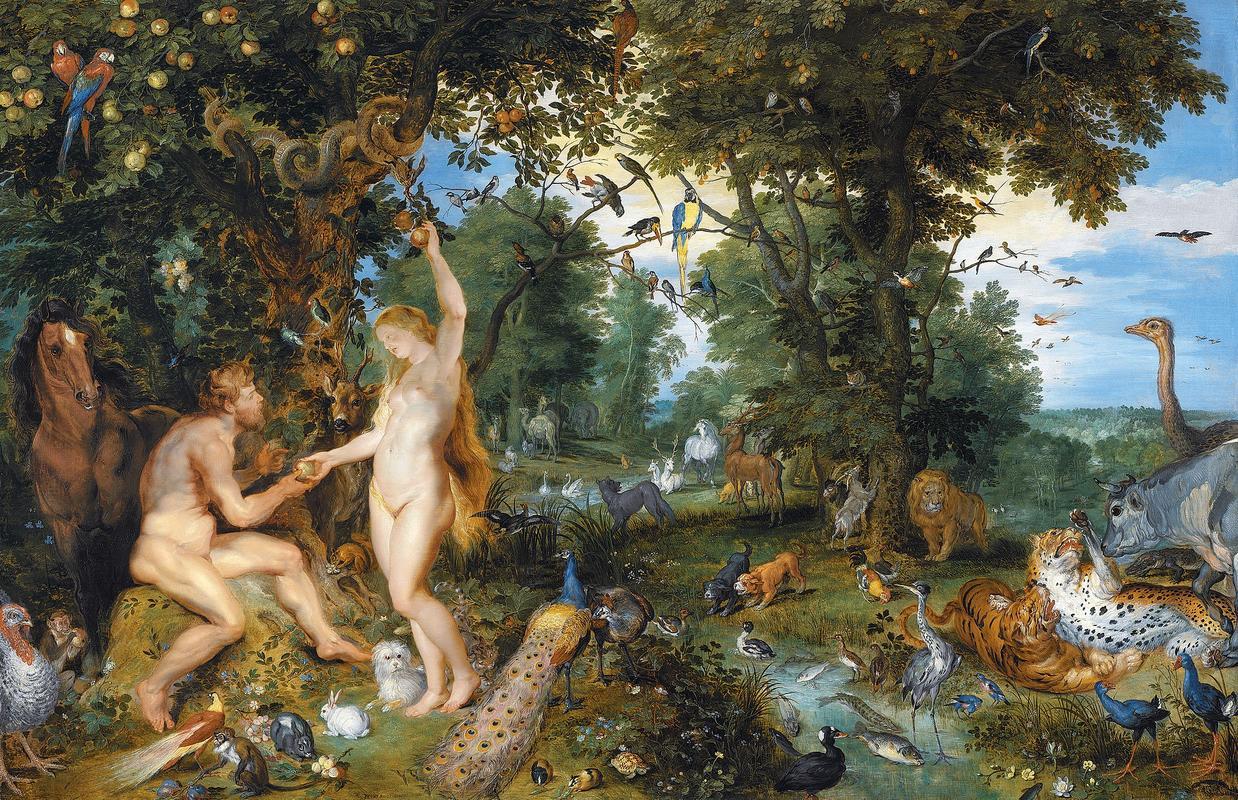 Rubens and Jan Brueghel the Elder, The Garden of Eden with the Fall of Man, Mauritshuis.

After their fall from grace, however, Adam and Eve were cast out from the Garden and had to make their way in the world, a place of tears, toil, and trial. But medieval and Renaissance artists still knew the pleasures of earthly gardens. The garden party was a scene in vogue, as in Buffalmacco’s fresco from the Campo Santo, the Holy Field, in Pisa. These fashionable tricentennials talk and play music, as if ignorant or heedless of the sickle of death hovering overhead. The fresco may have inspired the young Boccaccio to recount his Decameron tales in gardens, where his ten young narrators find a haven from the horrors of the Black Death. 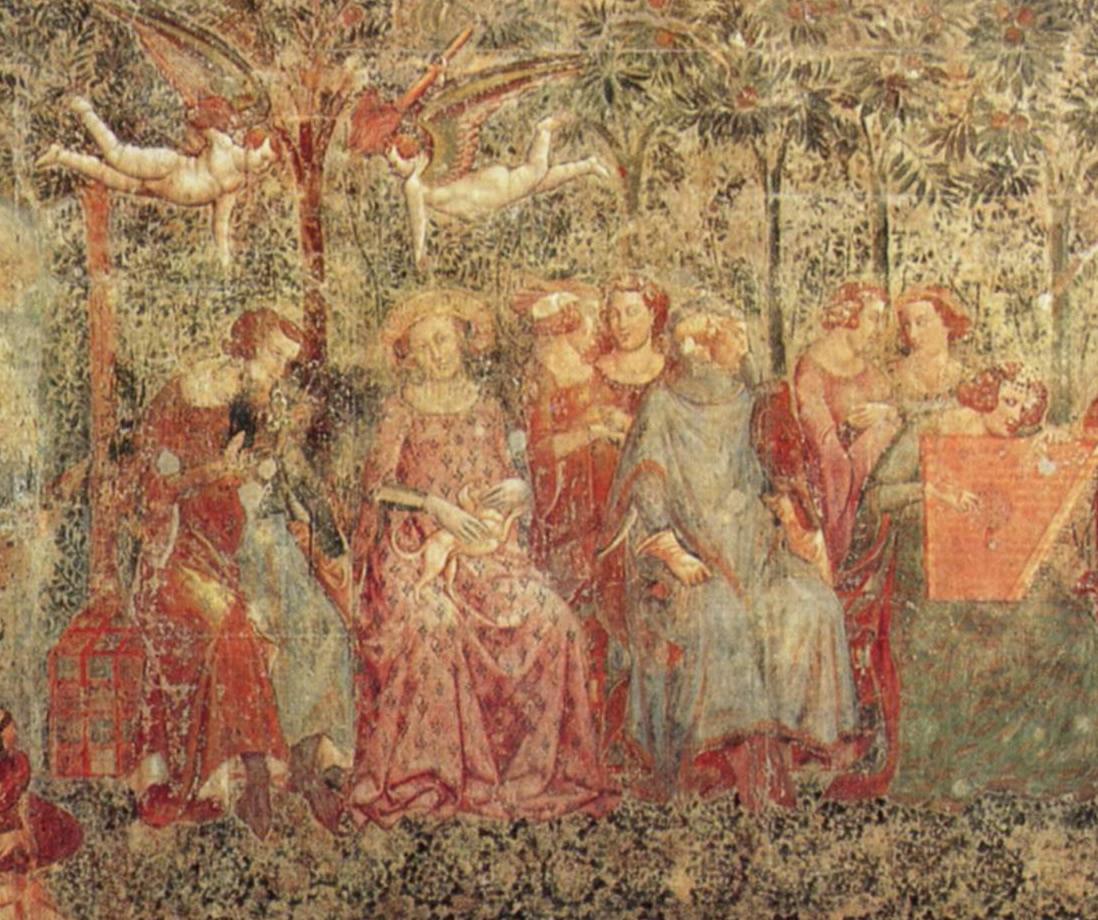 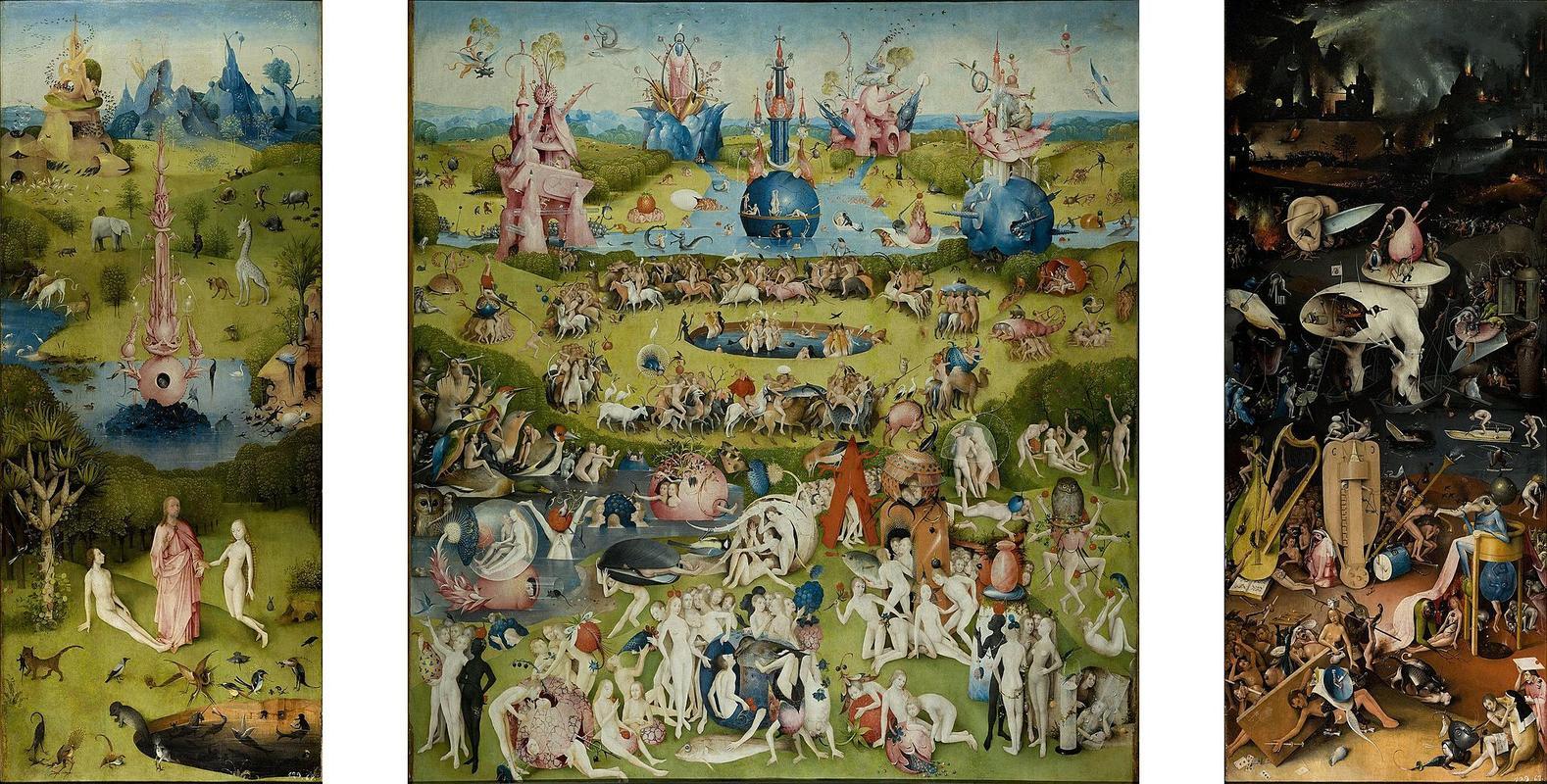 In this period of Christendom, spiritual serenity stood at the side of earthly sensuality, heightening a feeling for both. Humanity, forgetful of or asleep to the divine voice, required an intercessor who experienced and overcame their suffering in exile from the original paradise. Artists like El Greco captured this emotional trial of Jesus in a third garden, the Garden of Gesthemane or Garden of Olives. El Greco painted this scene around the same time as Bosch created his garden triptych. Christ’s beloved disciples slumber in the foreground as monuments to human weakness; he pleads with his Father to spare him his sacrifice, even as his right hand reaches for the cup, offered by an angel, that seals the deal. Behind him the mob gathers to take him to his death. Divine light brightens the darkness, fully engulfing the angel and cascading down to the disciples’ faces and folds of clothing. The mob, by contrast, has only human torches for illumination. 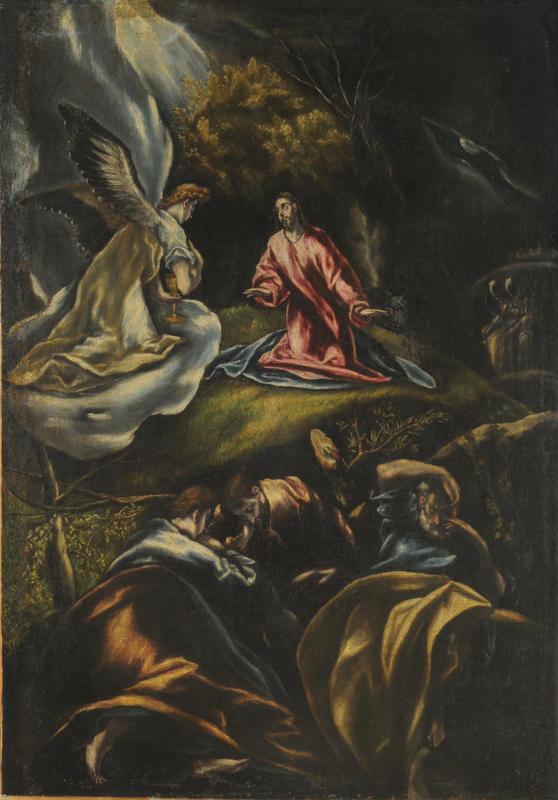 During the same period, Islamic artists were both designing gardens and illustrating them as an abode of paradise – the word paradise has Old Persian roots meaning “walled enclosure.” In Babur supervising the laying out of the Garden of Fidelity, the painter Nanha shows the Mughal Emperor (1483-1530) at the gate, taking a hand-on approach to the four-fold plots decorated with trees and flowers outside Kabul. 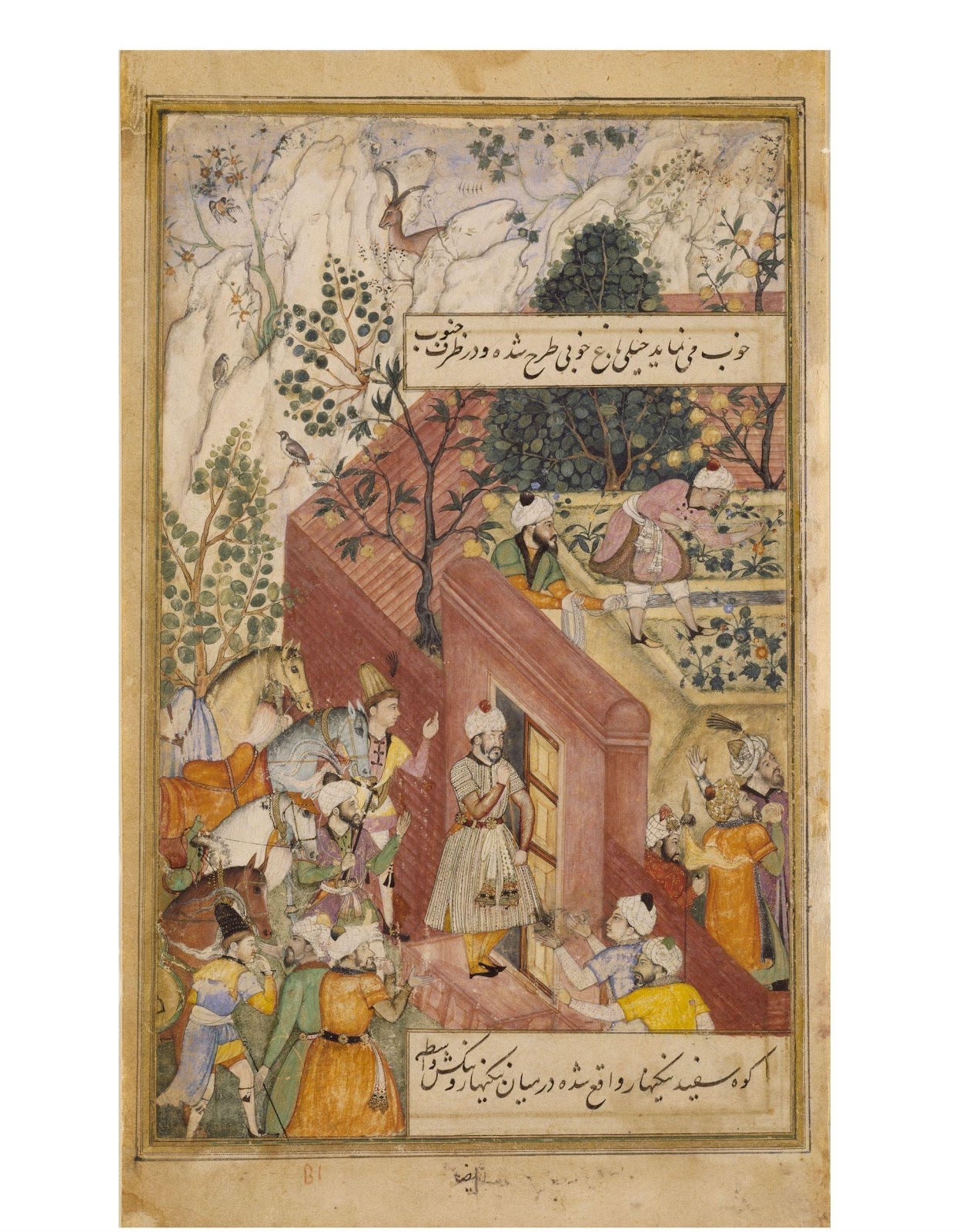 Nanha, Babur supervising the laying out of the Garden of Fidelity, Victoria and Albert Museum.

In another image, he directs the construction of the garden at Istalif, standing over a reflecting pond that flows out to irrigate the grounds. The design and features offer both religious meaning and physical comfort; these gardens provide spaces for calm contemplation and also delight the senses. 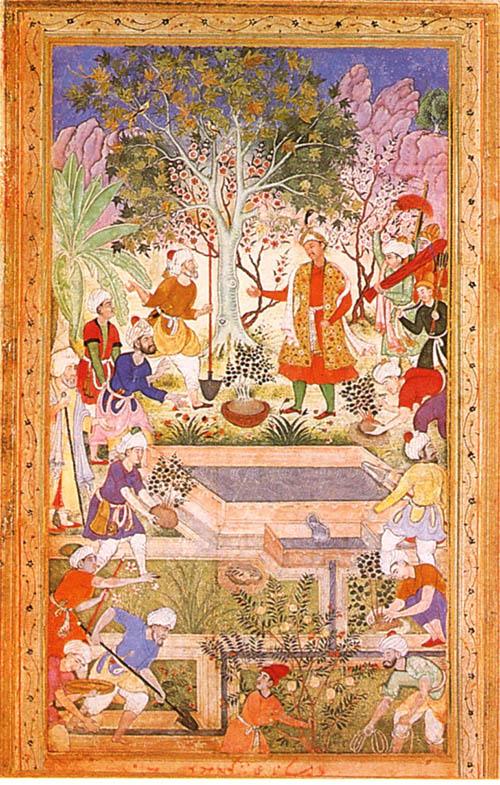 On every scale, from the humblest to the grandest, Chinese artists presented their imaginary gardens as places of refuge. At times they appear as busy salons for poets to meet and even compose verses celebrating the occasion. But, as in Wen Zhengming’s (1470-1559) ink drawing of The Garden of Pleasure in Solitude, a figure sits gazing out from a pavilion over a tree-lit and mountainous landscape, while a servant stands ready to serve him. This may have been a retreat, like visiting a Daoist or Buddhist temple, where air and scenery granted the viewer a moment of renewal. 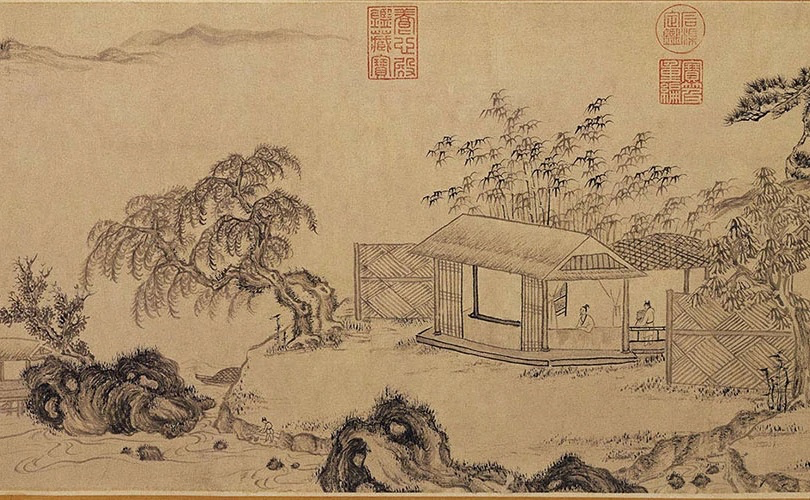 All these qualities – renewal, beauty, peace – inspired Claude Monet to build his garden at Giverny, which he painted over 250 times to capture the changing daylight and seasons. Monet’s particular genius lay in his understanding of time; like Titian, Monet continued to paint with failing eyesight, so that his paintings of his garden record not only the seasons of nature but also the ages of life, time passing in the life of the artist (and viewer). Time has entered the garden, even as each painting suggests a moment of rest and repose. 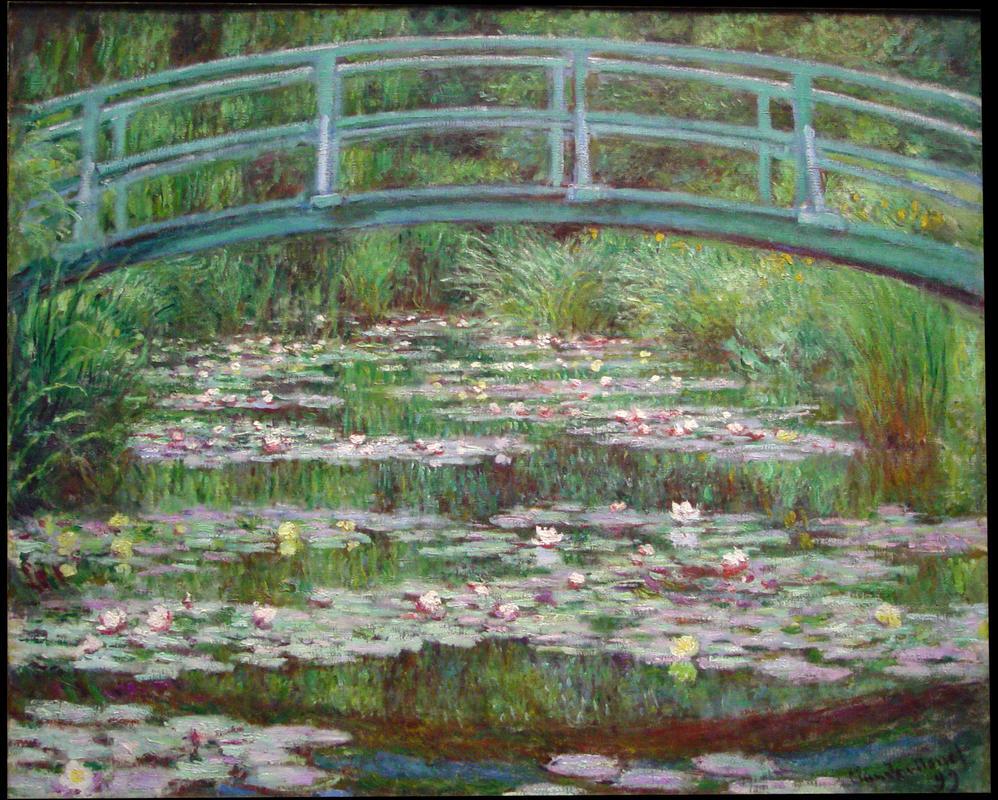 In the “modern times” of Monet we can see snapshots that preserve time in its passing. Eugène Atget created garden art with his large-format camera, showing us growth and decay, blooming flowers and scarred stonework, or trees without leaves, as in his photo of his beloved Saint-Cloud from 1922. The trees are both wild and artfully framed; they display their trunks in the stillness of water, forming a wall that is yet transparent. The line between nature and artifice enters the artwork itself, for Atget lets us sense, self-consciously, how we create our own gardens, shaping and cultivating our own nature in response to life around us. 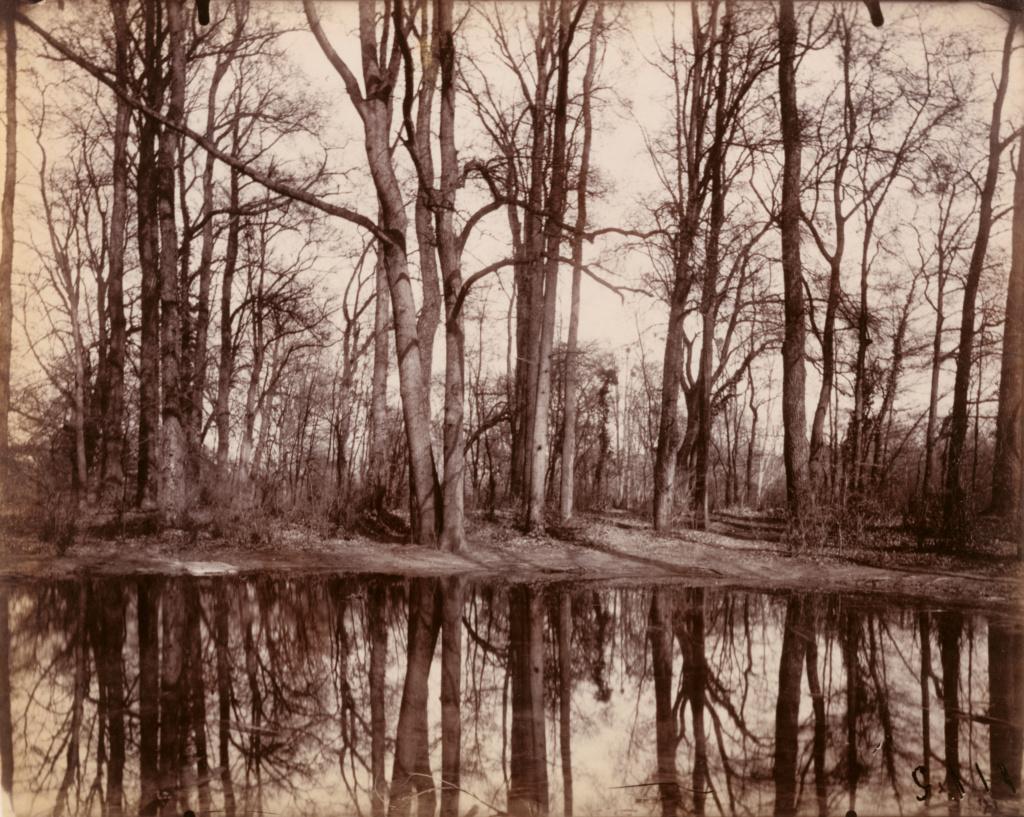 Oliver Sacks took his patients to the New York Botanical Garden. Designers like Frederick Law Olmsted created vast public gardens as green lungs in urban centers, as sites for recreation, health, and healing. Visual artists offer their own salutary perspectives; their paintings are windows into both nature and our inner lives.

among us
7 months ago

During the pandemic I started really working in my garden. It took my mind off of everything crazy happening outside and gave me a really nice thing to focus on!