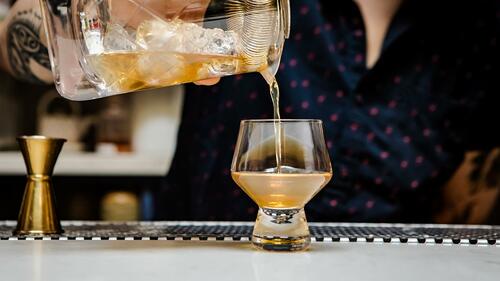 He may have been a tiny guy, but no one could’ve survived as many Earthquakes as Henri de Toulouse-Lautrec did. The elixir, if you could call it that, was notoriously potent. His recipe had just two ingredients, neither of which was water.

Lautrec’s alcohol adventures started with a harmless beer, just like the most of us. It’s that point in your life when you decide if you want to like alcohol or play hard to get. Lautrec was sold, he loved the drank. Day drinking, binge drinking, hold your pee drinking, it was all great. 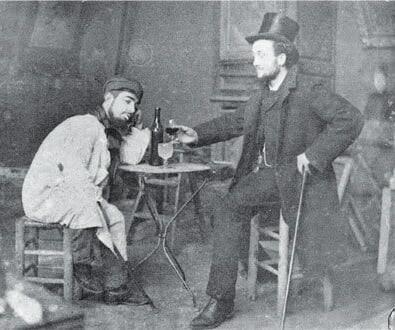 Henri de Toulouse-Lautrec (left) feeling the effects of his drink The Earthquake with his friend with Lucien Metivet (right).

Eventually, Lautrec needed stronger alcohol. While beer could be fun, what Lautrec really wanted was a drink that shook him up. Say hello to the Earthquake, equal parts absinthe and cognac in a wine goblet. With a 9.9 on the Richter scale, it looks like total destruction.

The hardcore alcoholic will probably drink it down without even thinking about it. But, you could try this updated version of the obscure classic from the Savoy Cocktail Book:

Pour the ingredients into a cocktail shaker. Add ice. Now, shake it. Pour it into a wine goblet. Take a swig and feel the earth shake beneath you.

Absinthe is the key ingredient in Lautrec’s Earthquake. It was a popular alcohol back in the day as it was cheap and strong. If you wanted to get drunk on a budget, absinthe was the way to go. Before anyone knew what the green fairy could do, Paris had managed to flood its bars with the stuff.

All the cool kids in Paris were drinking it: Manet, Van Gogh, Baudelaire, Gauguin, Degas, Oscar Wilde. They were all chasing down that green fairy. For Lautrec, she became an occupational hazard. Moulin Rouge had contracted the artist to make a few posters for them. Lautrec was happy to oblige. Free drinks every day? Who’d say no to that? 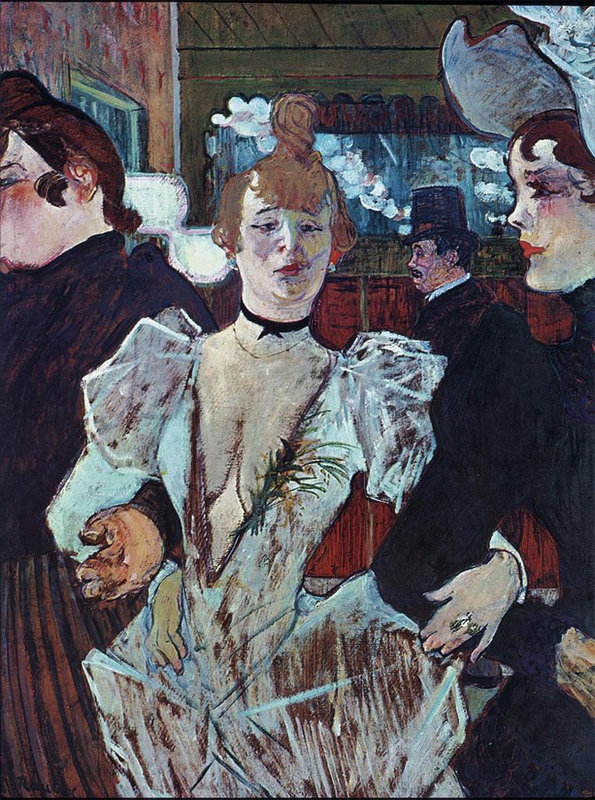 The Glutton at the Moulin Rouge by Henri de Toulouse-Lautrec, in the Museum of Modern Art, New York

She looks like she drank out of Lautrec’s goblet. When was the last time someone had to hold you up so you could move? (Ah, college!)" The Glutton," Louise Weber,  was a famous alcoholic. Thanks to Lautrec’s killer cocktail, his friends and acquaintances would enjoy nights of drunken debauchery, creative freedom, and...crippling addiction?

It’s amazing that Lautrec managed to stay alive as long as he did. If it weren’t for syphilis, he’d probably have invented a few more earth-shattering cocktails. Now the spirit absinthe is banned in most countries, or sold with such small amounts of wormwood (the stuff that makes it fun) you wouldn't feel its effects anyway. Even Switzerland, the birthplace of the green fairy, only lifted its ban on the substance in 2005.

A theme with alcohol? That green fairy is a saucy minx