Christian Louboutin and photographer Peter Lippmann have such a love affair going on. They collaborate almost every season to bring a passion for art history to life. The images seem to say that Louboutin's accessories could enhance any era, but perhaps only the 21st-century is quite ready for these two.

Each lookbook that they create brings together Louboutin's shoes with scenes styled to look like images from a particular time in history. For SS '14, they turned their eyes to the Impressionists. They weren't happy to just recapture any old Impressionist subject, though. They wanted specifically to showcase over-the-top colorful bouquets of flowers.

There's something intriguingly feminist about the collections they create together. Stiletto heels and clutch bags too tiny to hold don't scream feminism. And yet, the way that these images are all about femininity and strength, with no hand of a man in sight, is certainly a striking thing. Since both shoemaker and photographer are male, it could read as their male gaze stamped on the work and yet it doesn't. These are the types of flowers, shoes, and art prints that women buy for themselves. 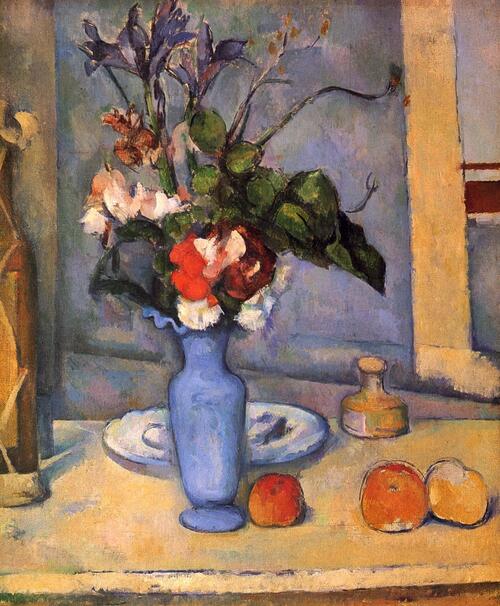 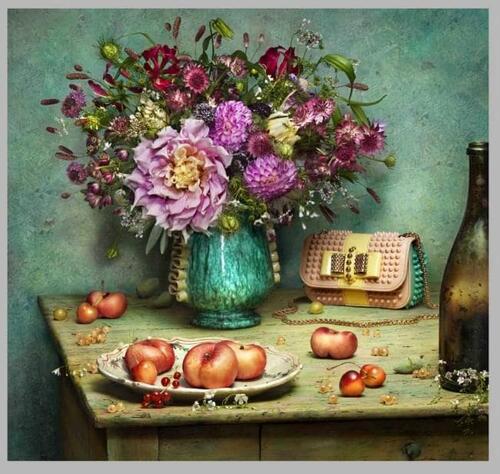 There are several Cezanne paintings that this stylized photo seems to have pulled from but the most obvious one is Le Vase Blue. Everything from the lush fruit to the wine bottle has been made more lush. Surely, you'd rather have those overflowing flowers sitting on your table? And, of course, your Louboutin purse right beside it. It's probably got your cell phone inside, ready to snap a photo of your table for Instagram. 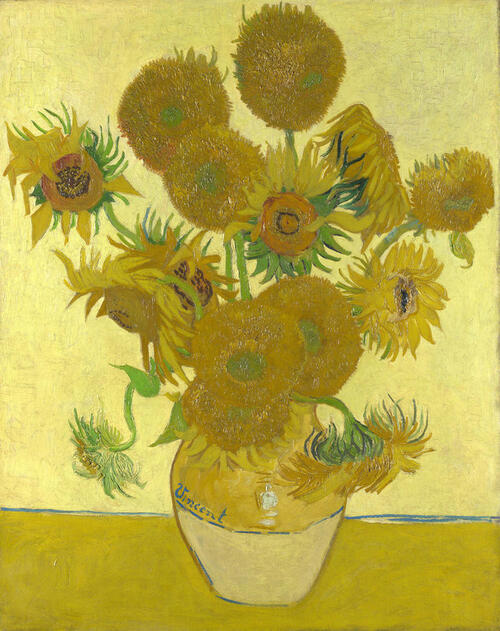 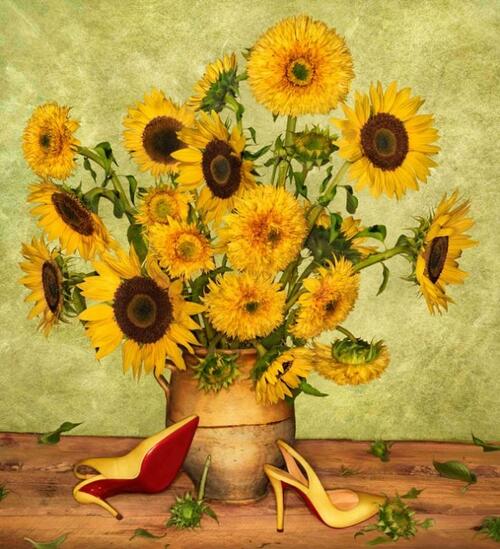 No other artist is as well known for sunflower still life paintings as Vincent Van Gogh. But which one was the inspiration for the Louboutin lookbook? None of the flower amounts are quite right. Van Gogh painted three with fifteen flowers, two with twelve flowers, and several with fewer flowers but never quite as many flowers as these. Of course, Louboutin embraces abundance so it's no surprise this vase has some extras. Besides, the flowers aren't so much the point in the end. The art is all about the heels, haphazardly cast aside perhaps after a long day of hard work or before a long night of passion. 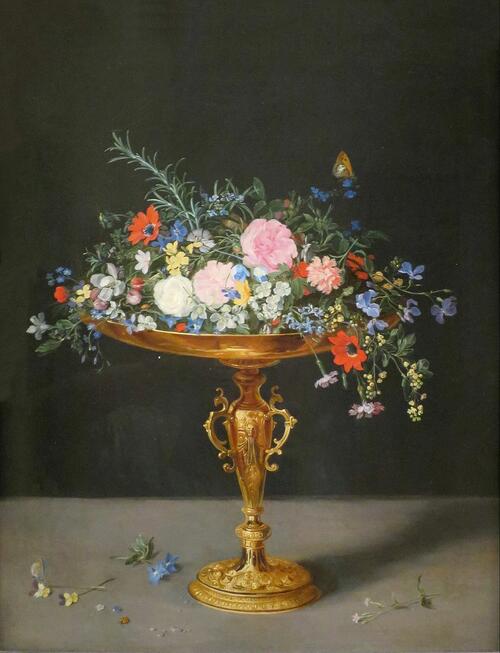 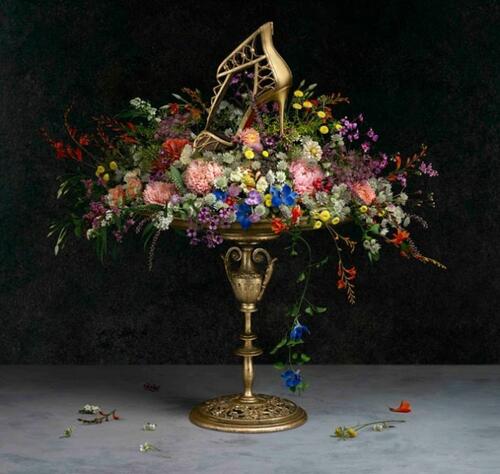 The inspiration here is so obvious. Jan Brueghel the Younger might have been better known for his Basket of Flowers than this (An Arrangement of Flowers) but how could Louboutin and Lippmann resist the inspiration of the ornate vase? The flowers spill luxuriously over the side. And on top, of course, instead of a teeny tiny butterfly is that grand shoe. 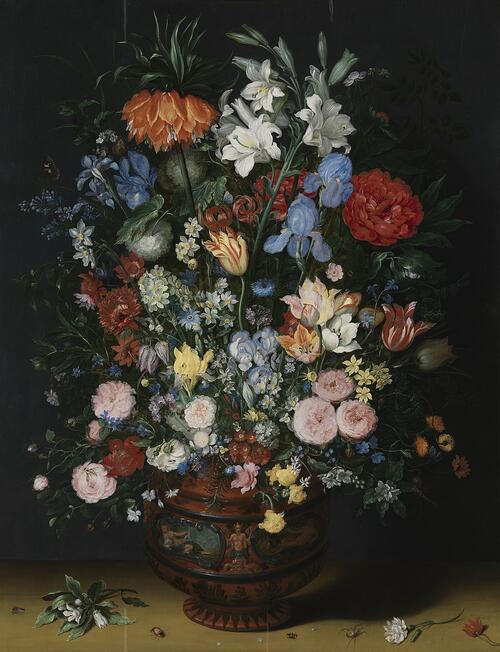 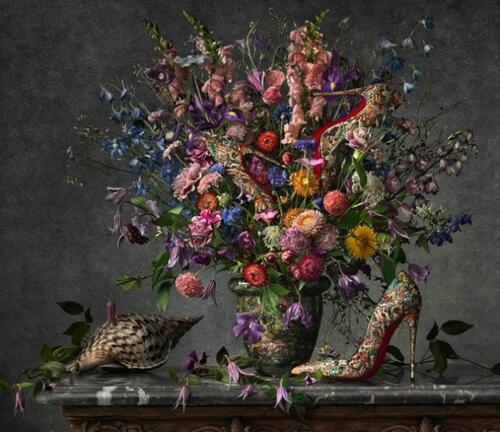 Both Younger and Elder painted elaborate flowers so why not draw inspiration from both? In fact, the Elder was sometimes called The Flower Brueghel because they were such a common theme for him. The arrangement here looks most like Flowers in a Ceramic Vase. The floral shoe at front and center gets the most obvious attention but what's up with the extra pair tucked directly into the bouquet? 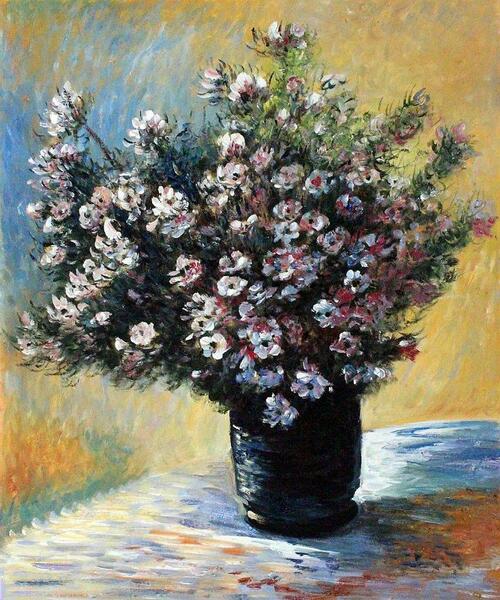 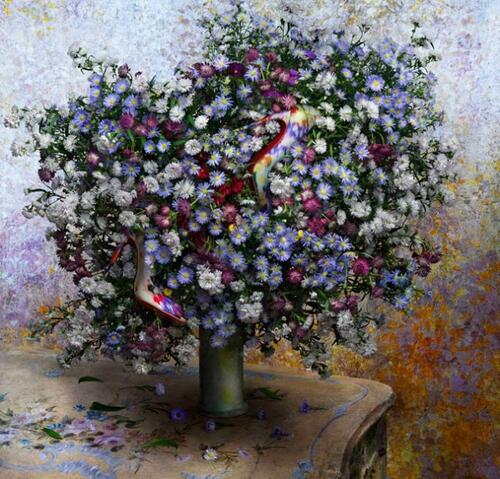 Apparently the artists decided it should be a theme: shoes planted in the bouquets. Perhaps it's the next gift idea for partners who are trying to make a huge statement with the flowers that they send. Just a bouquet is no longer enough. Of course, Monet was known more for his Waterlilies than this Vase of Flowers, but maybe Louboutin didn't want his shoes ruined in water.

Monet may have been the inspiration for more than just this one photo. Louboutin notes that the very specific shade of red that is the hallmark of his shoe bottoms is very close, if not exactly the same as, the color of the red poppies in Monet's Coquelicots. Although, fun fact, the shoe itself that first got the red-bottomed treatment was a shoe inspired by Andy Warhol's Flowers. 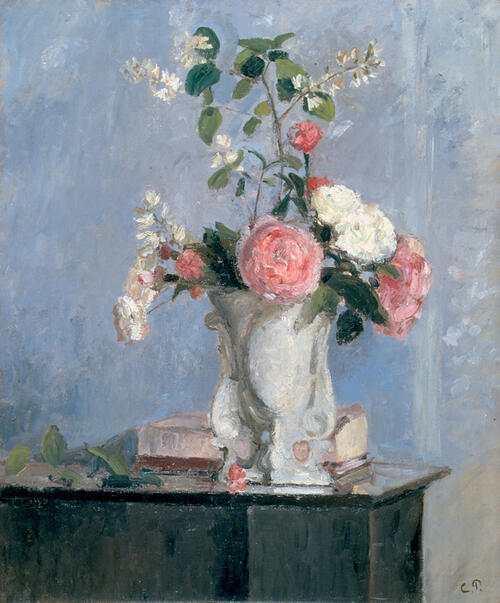 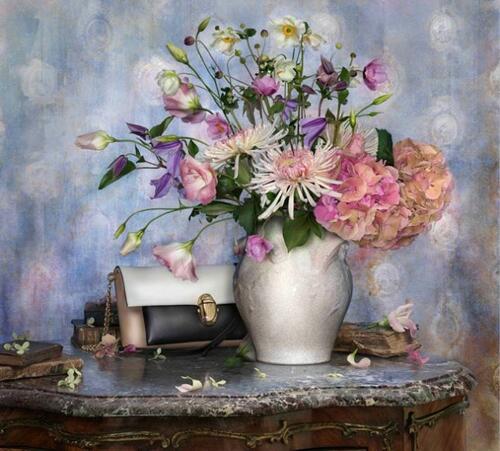 Camille Pissarro enjoyed trying his hand at a variety of different art styles. When he saw what others were creating, he wanted to do it, too. So he would probably be thrilled to see that Lippmann and Louboutin have used others, including him, for inspiration. This is perhaps this most Impressionistic of all the photographs, drawing a lot of little details from the original. Who is the woman who comes home to this place and sets that purse against the books by her flowers? 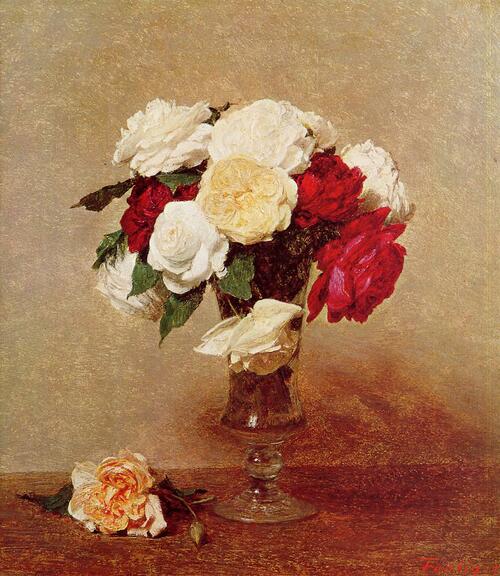 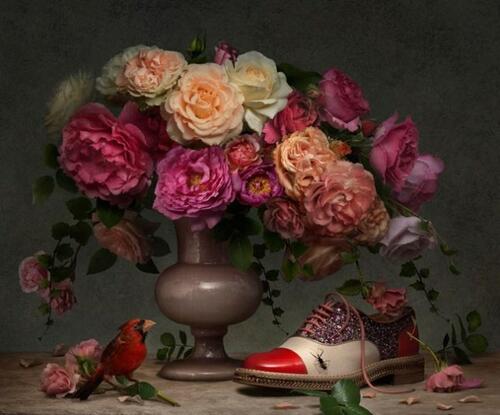 Henri Fantin-Latour painted a lot of flowers, particularly a lot of roses. It's hard to guess which one inspired this image, though. The contemporary image took a lot of liberties adding a bird, the Louboutin shoe, and a bug crawling on the shoe. There's probably a lot of rich symbolism here but what exactly it means is anyone's guess.

Fun Fact: The only American magazine that Louboutin reads regularly is "Gardens Illustrated." Gardening is one of his favorite pasttimes.

I desperately want a pair of his shoes...

Louboutin is named after French fashion designer Christian Louboutin, a women's fashion firm specializing in high-heeled shoes. Founded in 1991 and in my humble opinion, the greatest shoe maker of all time.