“For me, people come first. I have tried to assert the dignity and eternal importance of the human being.” - Alice Neel 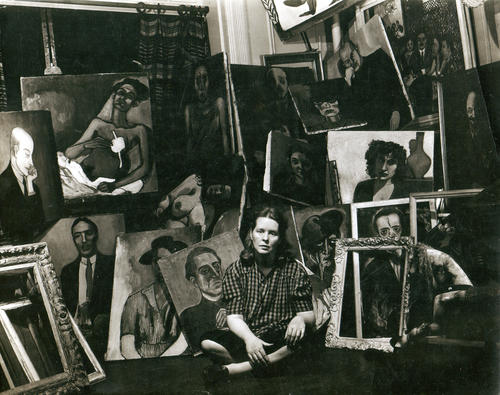 At the beginning and end of the Alice Neel “People Come First” exhibit at the de Young Museum, you’ll find a large-scale black-and-white photo of the artist. In each, she is surrounded by her art, almost swallowed by her prolific output. The images, taken more than twenty years apart, provide perfect bookends to a show that’s carefully curated to convey the intimacy Neel portrayed in her portraiture across her decades-long career. As the exhibit’s title suggests, this exhibit is all about humanity - the good and the bad - and showcases the artist’s deep empathy for the human condition. It also highlights her prescience, both technically and in choice of subject matter, for creating work that was truly before her time, work that resonates as strongly today as it did when she created it, if not more so. 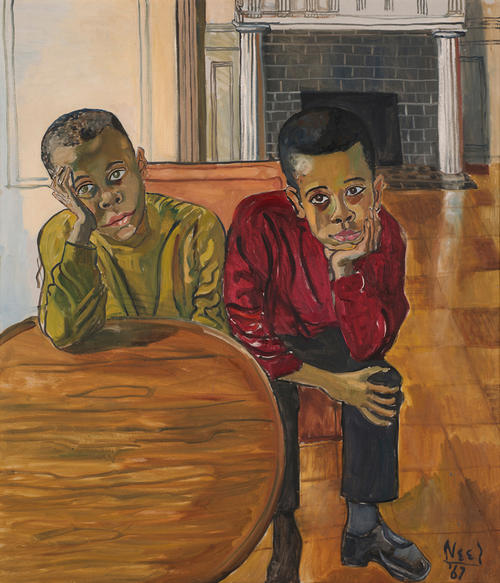 The exhibit begins with a handful of New York landscapes and a poem that she wrote about her love for Spanish Harlem. These paintings speak as much to the urban space she called home as much as to the people who populated the area and from whom she often drew inspiration. The gallery moves easily into portraits of those people, giving us glimpses into the lives of her neighbors. For example, above, Neel's 1967’s The Black Boys. Not all art exhibits are worth getting the audio tour, but this one is, as the audio doesn’t just complement, but also supplements what we see on view. In this instance, we hear an interview with one of the boys, now all grown up, sharing his experience of what it was like to sit for this painting.

You almost expect any one of Neel’s portraits to begin talking to you. They’re so wrought with emotion. They’re so incredibly human. Although she called New York home, the exhibit curators point out that much of her sense of activism, social justice, and humanist principles resonate directly with the history and sensibilities of San Francisco. In fact, this exhibit is on its third and final leg of its tour and this is the only West Coast venue in which it is showing. 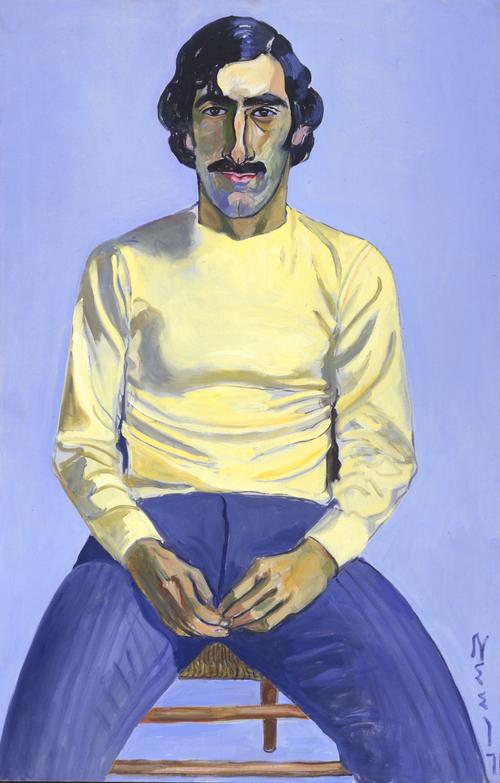 There are a couple uniquely “San Francisco” things to look for. In the largest gallery space, we see portraits of all kinds, demonstrating the many different types of people the artist considered worthy of capturing forever on her canvas. She painted people of color, members of the LGBTQ+ community, Communist artist friends, single mothers, and others who were…well, “othered” by society. In this room, look for the 1971 portrait of Robert Hagopian, a San Francisco concert pianist and one of a number of young men dying of HIV/AIDS whom Neel painted; his parents acquired this painting after Alice Neel’s death, to honor and grieve their son. 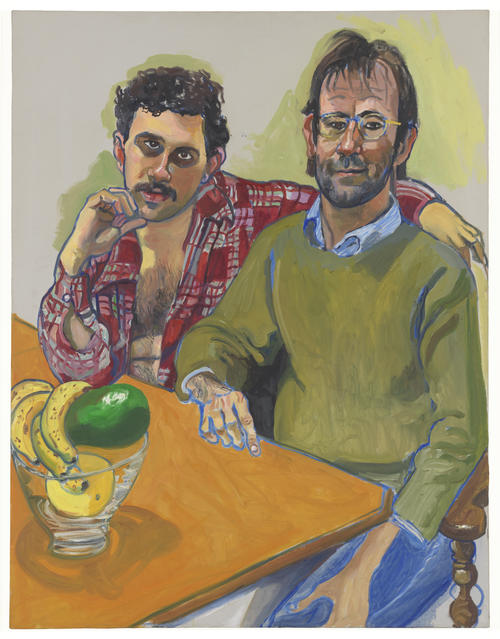 Although not specific to San Francisco, there are two other pairs of paintings you might want to keep an eye out for in this largest gallery room. On a main wall you’ll see David Bourdon and Gregory Battcock (1970). To its left, on an adjoining wall, you’ll see Geoffrey Hendricks and Brian (1978). Each is a painting of two men together, and yet the feelings evoked by the paintings are strikingly different, due in large part to how much the pair are (or aren’t) touching in the image, and the way that they feel casually together in their space. This speaks to Neel’s distinct ability to capture so many different shades of intimacy in her work, something we see again and again throughout the exhibit. 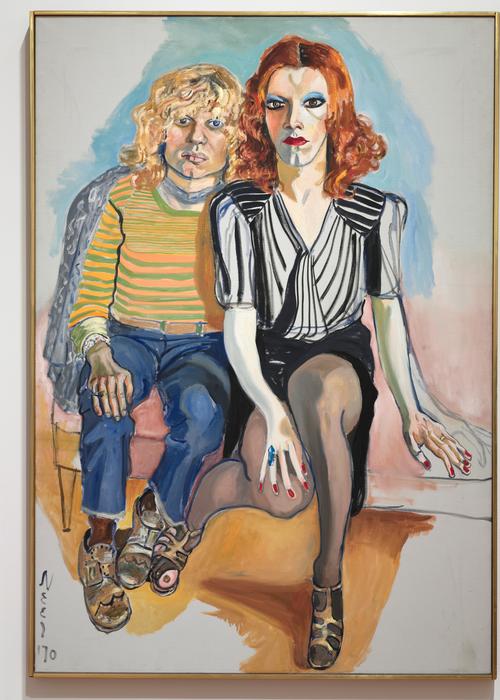 © The Estate of Alice Neel. Image courtesy the Cleveland Museum of Art.

Also in this room, look for the two very different paintings of Jackie Curtis. The genderqueer Andy Warhol superstar appears front and center as you enter this room of the gallery, speaking directly to Neel’s celebratory portrayal of people from varied walks of life. It’s easy to notice this image, and hard not to; in fact, it is one of the exhibit’s primary press images. However, don’t overlook the painting from a couple of years later titled Jackie Curtis as a Boy. Here we see Jackie in a different sort of drag or gender performance, reflecting, as the wall text reads, “the performer’s expansive play with gender.”

Move a couple smaller galleries down into the exhibit to find the second San Francisco reference in “People Come First.” You’ll spot it thanks to the video that’s playing on a wall there. Look to the right of the video and you’ll see a 1969 portrait titled Ginny in Blue Shirt. Ginny was Alice Neel’s daughter-in-law who lived in the Bay Area with Neel’s son Hartley. Neel came to visit them for about two months in the late 1960s, during which time she created this painting. Turn back to the video and you’ll see that it’s a silent documentary that Hartley filmed of Alice Neel painting the very piece that you see hanging to the right. It's fascinating to be able to see Neel's process and then appreciate the result of her work.

Also in this room you’ll see some of the only works in the exhibit that are created by other artists. This is to showcase Alice Neel’s prescience, the amazing way that she created works before her time. Her pieces hang next to pieces by others, such as Richard Diebenkorn, showing how in style, composition, subject matter, etc. she was practically foretelling the future. This is probably less due to psychic ability and more due to her gift to see into her subject’s human essence. Ginny is quoted as saying that when she saw Neel’s portrait of her, she was struck to see that the artist had captured something she herself had perhaps not known was within her. She does this with each of her portrait subjects and this is perhaps why she was both before her time and of her time in such a unique way: there is a universal human element to her work. 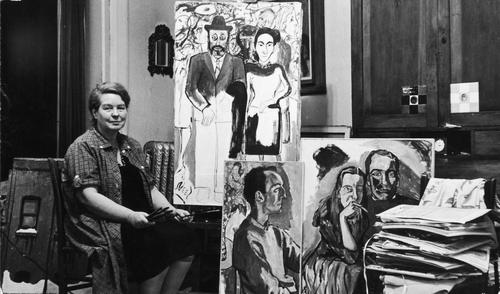 There is truly so much more to say about Alice Neel, her life, and the ways in which her humanity shines through in this exhibit. Neel suffered with lifelong depression, battled her way through suicide attempts, had both terrible and healing experiences in asylums, struggled with loss and joy as a mother, and worked as a female painter for five decades. It is her own intimacy with the highs and lows of the human experience that allows her to capture both the individual and greater social human truths within others. We see this in works like Well Baby Clinic and City Hospital, images created decades apart that both capture the essence of what it’s like to feel entirely alone in a room of people at an uncaring medical establishment. We see it in her portraits of single mothers, paintings of couples together, and her nudes, including her famous nude self-portrait as an artist in her eighties. This is the kind of exhibit that you can’t see just once as there is so much richness to explore. By painting both herself and others, Alice Neel lets us better see ourselves.

People Come First is on exhibit at de Young museum through July 10, 2022. Visit the museum’s blog for a unique post of work by Bay Area artists inspired by this exhibit.