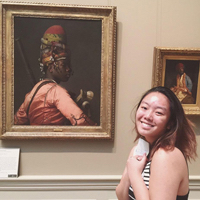 Just one of the curse words Captain Haddock hurled back in 1941s North Africa in The Adventures of Tin-Tin: The Crab with the Golden Claws. Bashi-bazouks were unpaid mercenaries who fought for the Ottoman Empire, and received their compensation from plunder. Bashi-bazouk translates to “headless” or “corrupted head,” which refers to their lack of loyalty to the army they fought with, as well as their absence of a leader. Unaffiliated with any armed forces, Bashi-bazouks did not wear military uniforms or attributing badges, were often hired the day before, and were prone to deserting. Notorious for their violence and lack of discipline, bashi-bazouks offered brute force, and intimidation by contributing to the initial size of the Turkish Ottoman army.

However, Gérôme’s regal depiction does not align with the historical brutality of bashi-bazouks. The sitter’s ornate headdress and shiny silk attire present him as a noble figure of dignity. The subject, shown in profile, appears more closely to Othello, a skilled soldier and leader (overshadowed by his bad romance), rather than a violent and lawless bashi-bazouk. Created between 1868 and 1869, Gérôme’s painting would have been considered a bold contradiction to the popular trope of bashi-bazouks as grimy rapists, as demonstrated by Konstantin Makovsky’s 1877 The Bulgarian Martyresses.

Although Gérôme prides himself in photographic realism, he executes this painting in Paris with a model draped in textiles he purchased months ago from abroad. Gérôme’s use of props and a set meant to create the illusion of an Oriental setting, was also employed by Henri Matisse for his odalisque series. Despite Gérôme’s extensive attention to detail in his rendering, he does not illustrate a genuine bashi-bazouk, just as Matisse did not paint odalisques, but French models. However, Gérôme’s dignified depiction of a non-Westerner is a breath of fresh air, especially in the nineteenth-century where the European art world was filled with Orientalist images of people as color as salacious savages.

Here is what Wikipedia says about Bashi-Bazouk (Jean-Léon Gérôme)

Bashi-Bazouk (possibly titled Bachi-Bouzouk nègre) is a painting by French artist Jean-Léon Gérôme. Done in oil on canvas, the painting depicts a Bashi-bazouk, an irregular soldier of the Ottoman Empire. The painting is currently on display at the Metropolitan Museum of Art.