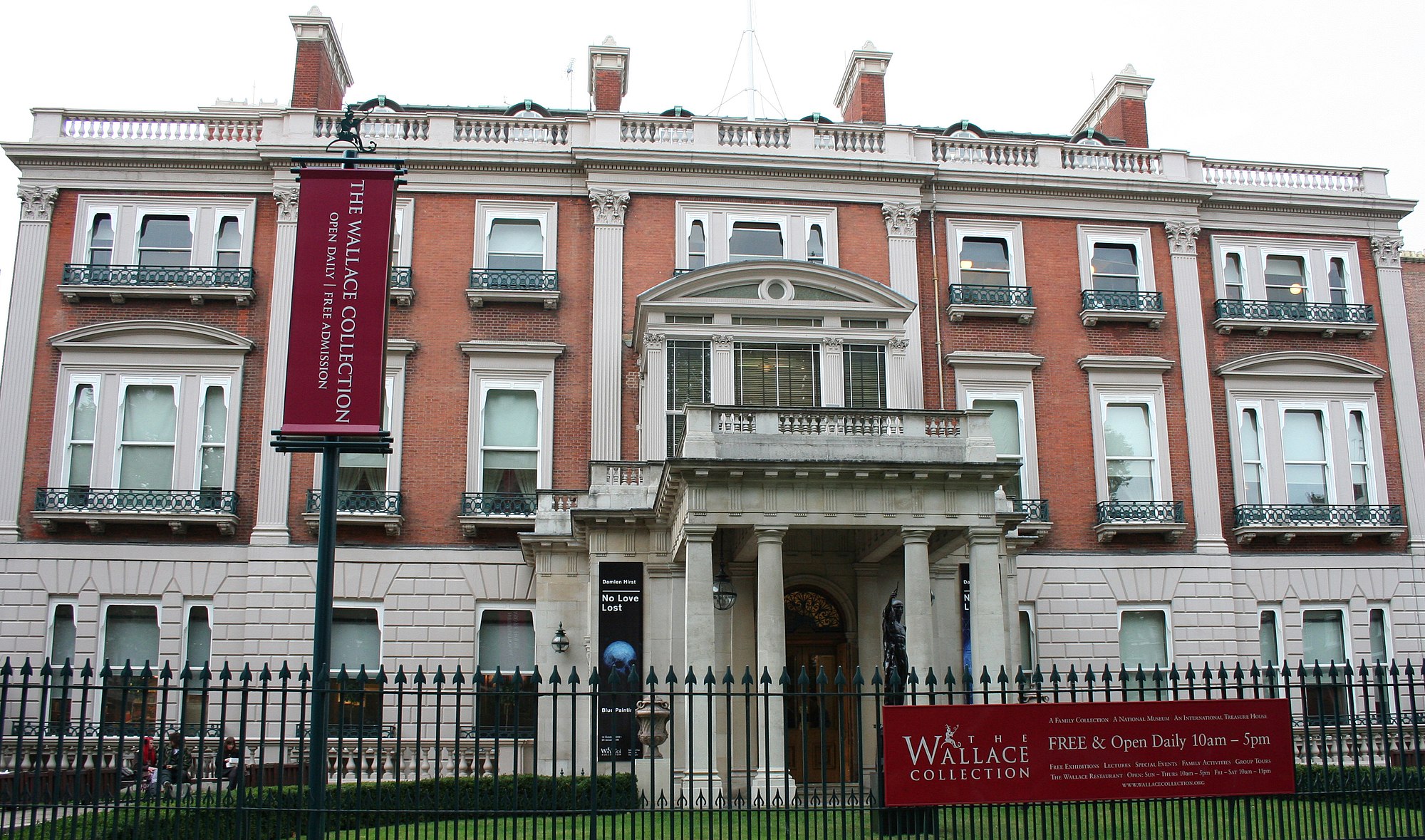 More about The Wallace Collection

Works at The Wallace Collection

The Regency family saga behind the Wallace Collection reads like a Jane Austen novel on Viagra.

The site is Hertford House, the eighteenth-century London townhouse of the Seymour family, which traces its lineage to Queen Jane Seymour, third wife of Henry VIII.

The first major collector in the family was Francis Seymour-Conway, 1st Marquess of Hertford, who acquired works by Joshua Reynolds and others. Thomas had a whopping thirteen children with his wife, Isabella Fitzroy, granddaughter of one of King Charles II’s numerous bastards. Charles was England’s “Merry Monarch,” a nickname he earned in bed. The 1st Marquess was ambassador to France under Louis XV, and befriended Louis’ Mistress, Madame de Pompadour, whose portrait by Boucher is now a cornerstone of the collection.

His firstborn son, Francis Ingram-Seymour-Conway, 2nd Marquess of Hertford, carried on the family passion for art by acquiring a Gainsborough, and for ladies of (shall we say) interesting reputation. His second wife, Isabella Anne Ingram, cuckolded him with the young Prince of Wales, future King George IV. Nonetheless, the 2nd Marquess adopted her family name when her mother died and left them a massive fortune.

Their son, Francis Seymour-Conway, 3rd Marquess of Hertford, added several masterpieces to the collection, including works by Titian and Rembrandt. His choice of bride (much to the family’s horror) was the lovely Maria Emilia Fagnani, who had a Mamma Mia situation going on with her paternity. She was the bastard daughter of Italian noblewoman and ex-dancer, Costanza Brusati, and one of three eligible men. All three potential baby daddies generously provided for Maria, making her fabulously wealthy, but the Hertford clan never accepted her and drove a wedge between the couple. She retired to Paris, while the 3rd Marquess sank into hedonism. He was the basis for the lecherous Lord Steyne in William Makepeace Thackeray’s monumental novel, "Vanity Fair."

Supposedly, King George III attempted to bed Maria when he was in the throes of madness, a twist fit for American Pie, since King George’s son had previously banged the 3rd Marquess’ mom. Even weirder, the Prince and the Marquess were good friends. That awkward moment when your buddy bangs your mom, and then his dad tries to bang your wife.

The 3rd Marquess and Maria’s son, Richard Seymour-Conway, 4th Marquess of Hertford, followed in his mother’s footsteps by living La Vie Boheme in Paris. He was the greatest collector in the family, contributing works by Velazquez, van Dyck, Rubens and Poussin. Though he never married, he sired a bastard (starting to notice a theme here?), thus keeping the family tradition of illicit sex and illegitimate progeny as alive as the art collection.

That bastard, Sir Richard Wallace, 1st Baronet, became a decorated hero for his philanthropic efforts during the 1870 siege of Paris. He kept a mistress (surprise, surprise), Amelie-Julie-Charlotte Castelnau, whom he eventually married, making her Lady Wallace. After Richard’s death, Lady Wallace bequeathed the house and collection to the British Nation.

Lady Wallace stipulated that no part of the collection could leave Hertford House, even on temporary loan. Consequently, the magnificent effect is exactly as the Marquesses of Hertford desired. If the chance to relive this sordid family history amidst the very halls where it unfolded isn’t selling point enough, the museum is free, and has a charming French brasserie in the glass-enclosed courtyard; the perfect place to grab a bite out of the London rain, under the illusion of sunny France!

Here is what Wikipedia says about Wallace Collection

The Wallace Collection is a museum in London occupying Hertford House in Manchester Square, the former townhouse of the Seymour family, Marquesses of Hertford. It is named after Sir Richard Wallace, who built the extensive collection, along with the Marquesses of Hertford, in the 18th and 19th centuries. The collection features fine and decorative arts from the 15th to the 19th centuries with important holdings of French 18th-century paintings, furniture, arms and armour, porcelain and Old Master paintings arranged into 25 galleries. It is open to the public and entry is free.

It was established in 1897 from the private collection mainly created by Richard Seymour-Conway, 4th Marquess of Hertford (1800–1870), who left both it and the house to his illegitimate son Sir Richard Wallace (1818–1890), whose widow Julie Amelie Charlotte Castelnau bequeathed the entire collection to the nation. The collection opened to permanent public view in 1900 in Hertford House, and remains there to this day. A condition of the bequest was that no object should ever leave the collection, even for loan exhibitions. In September 2019, the board of trustees announced that they had successfully obtained an Order from the Charity Commission for England & Wales which allowed them to enter into temporary loan agreements for the first time.

The United Kingdom is particularly rich in the works of the ancien régime, purchased by wealthy families during the revolutionary sales, held in France after the end of the French Revolution. The triumvirate of The Wallace Collection, Waddesdon Manor and the Royal Collection, all three located in the United Kingdom, forms arguably the largest, most important and extant collection of French 18th-century decorative arts in the world, rivalled only by the triumvirate of the Musée du Louvre, Château de Versailles and Mobilier National in France. The Wallace Collection is a non-departmental public body and the current director is Xavier Bray.

Check out the full Wikipedia article about Wallace Collection