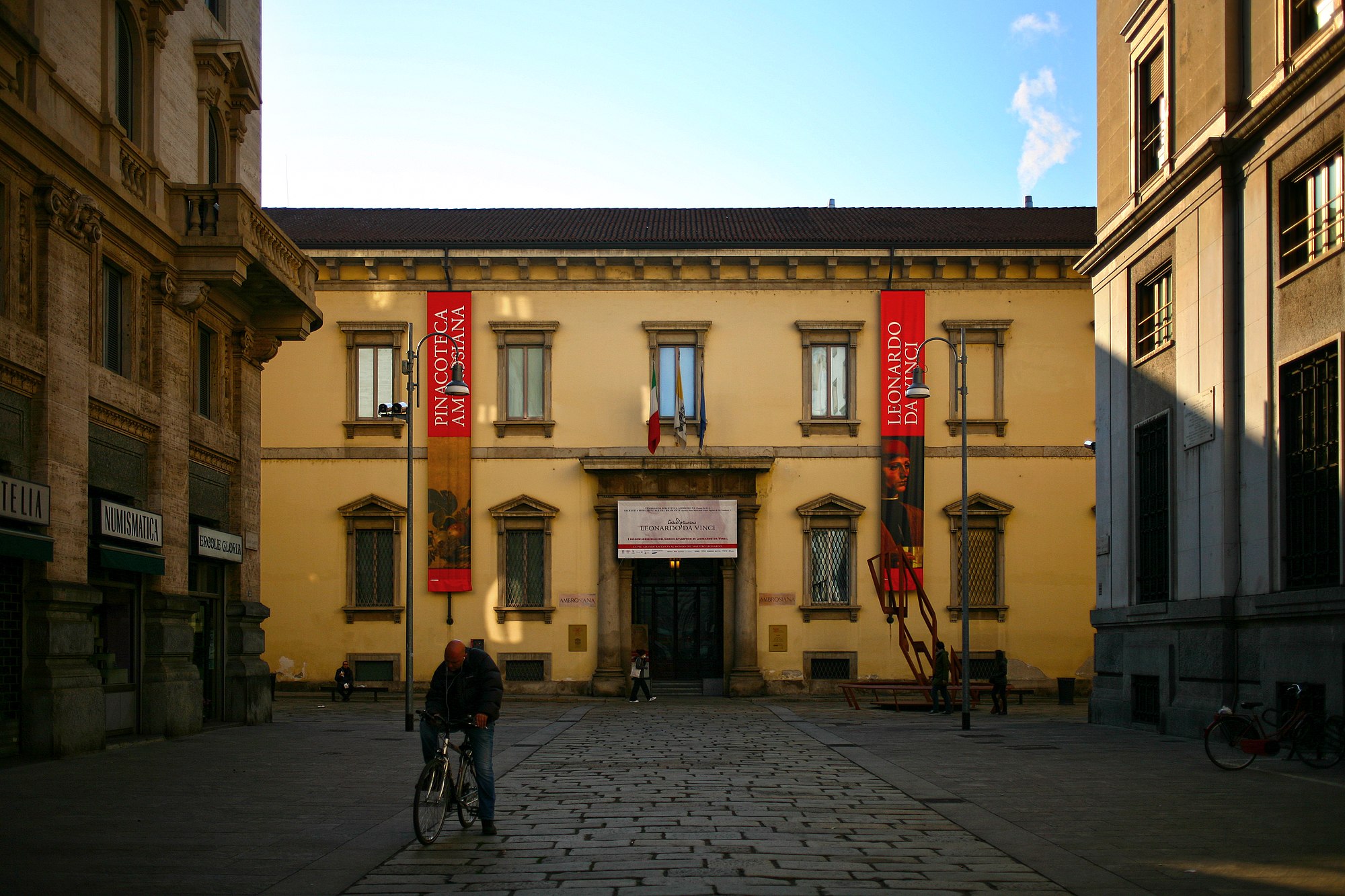 The museum maintains the "Codex Atlanticus," which is comprised of 1,750 technical drawings by Leonardo.

One of the museum's most famous assets is a lock of hair of Lucrezia Borgia, the Spanish-Italian daughter of Pope Alexander VI and Vannozza dei Cattanei.

The twenty-four rooms of the Pinacoteca Ambrosiana follow a chronological, three-hundred-year path through the collection.

Over four centuries ago, Cardinal Federico Borromeo sent out emissaries all over the Mediterranean to find manuscripts for his Biblioteca Ambrosiana, his library, which contains his art gallery, the Pinacoteca Ambrosiana.

The original goal was to battle against the literary forces of Protestantism, in a movement called the counter-reformation, and the art gallery is a cherry on top for good measure. As one of the first European public libraries not to chain those precious books to the reading tables, the Ambrosiana art and literature collections became one of the most financially and culturally valuable sites in Europe. When Napoleon and his posse rolled into town, they "borrowed" some of the most valuable items, including Leonardo's technically detailed drawings, and only returned some of them after the regime changed. Its collection includes Portrait of a Musician by da Vinci, The Madonna of the Pavilion by Botticelli, Basket of Fruit by Caravaggio, works by Jan Brueghel the Elder, and Portrait of Paolo Morigia by the great Fede Galizia. If you thought maybe Cardinal Borromeo named his museum after everyone's buffet favorite, "ambrosia fruit salad," featuring fake cherries, coconut, mayonnaise, Cool Whip, and marshmallows, you're, unfortunately, incorrect.

One of the Pinacoteca Ambrosiana's most unusual assets is its Display case with the hair of Lucrezia Borgia, by Alfredo Ravasco. Borgia, the Spanish-Italian daughter of Pope Alexander VI and Vannozza dei Cattanei, died in 1519, about ninety years before Cardinal Borromeo opened the Pinacoteca Ambrosiana. The records of the museum indicate that the museum acquired the lock of hair more than seventy years later, which makes me wonder, where did the lock of hair sit for 160 years? Borgia was married to Alfonso d'Este, Duke of Ferrara, whose family emblem is the eagle, and hers is the bull, so Alfredo Ravasco put the animals on the display case. Isn't that sooo romantic? Lord Byron, one of the more famous Romantics, thought so too and had a great time looking at her hair and reading her love letters to Cardinal Bembo.

Mary Shelley visited, decades after Frankenstein, researching for her travel book. From the late nineteenth century until 1911, one of the employees, and eventually, the director, was the man who would become Pope Pius XI. He would, a few decades later, campaign against racism and fascism in Italy.

Here is what Wikipedia says about Biblioteca Ambrosiana

The Biblioteca Ambrosiana is a historic library in Milan, Italy, also housing the Pinacoteca Ambrosiana, the Ambrosian art gallery. Named after Ambrose, the patron saint of Milan, it was founded in 1609 by Cardinal Federico Borromeo, whose agents scoured Western Europe and even Greece and Syria for books and manuscripts. Some major acquisitions of complete libraries were the manuscripts of the Benedictine monastery of Bobbio (1606) and the library of the Paduan Vincenzo Pinelli, whose more than 800 manuscripts filled 70 cases when they were sent to Milan and included the famous Iliad, the Ilias Picta.

Check out the full Wikipedia article about Biblioteca Ambrosiana