The Hidden Meaning of Art in In Bruges

What makes a good movie great? A trip to the museum, that’s what.

To celebrate the recent release of director and writer Martin McDonagh’s latest film Three Billboards Outside Ebbing, Missouri, I wanted to revisit McDonagh’s first feature film, In Bruges, and talk about the museum scene in the film. Because, why not? Movies and artwork go together like eggs and bacon.

This scene is obviously the best scene in the whole movie (because we get to look at art, duh), although Colin Farrell’s character Ray, who is pretty unenthused about the whole art thing, might not agree. Nevertheless, the three paintings McDonagh chooses for the film aren’t as random or boring as Ray (or the audience) might seem to think they are at first glance. Each work is centered around a common theme: morality.

Considering the fact Ray and his partner Ken (played by the very talented Brendan Gleeson) are two hitmen looking at and reflecting on these artworks, morality seems an ironic and even cheeky topic for the film. McDonagh does a great job playing it straight, though. Check out the scene here (SPOILERS). 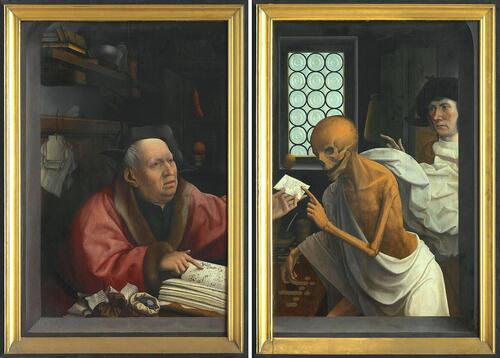 The first painting we see is Jan Provoost’s diptych Death and the Miser. In the screenplay for the film, McDonagh describes the work as “a skeletal Death come to collect his due.” Yeah. Creepy. Looks like old moneybags over here couldn’t hoard enough dough to stop Death, and now he’s getting what’s coming. 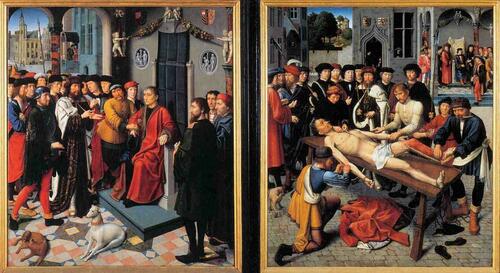 The next work is another diptych, Gerard David’s The Judgement of Cambyses. These lovely scenes depict poor Sisamnes, a corrupt Persian judge, being arrested and having his skin removed (by order of Emperor Cambyses II) while he was still alive (I believe the technical term is “flaying”) because he got caught taking bribes. I guess Cambyses ran a pretty tight ship.

The Judgement of Cambyses is another “case” of black-and-white morality presented here, the crime again revolving around greed. Instead of Death though, we’ve got good old fashioned humans that have come to carry out the sentence.

Ken is seen quietly pondering the first work, while Ray offers the second little more than a sneer and a wince that might best reflect the feeling of nausea. I get it, Ray, it’s pretty brutal. 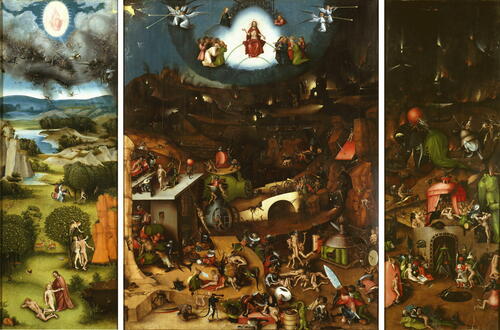 The last work is a triptych, The Last Judgment by Hieronymus Bosch. It depicts a pretty gruesome scene of the apocalypse, with Jesus Christ presiding over a scene of monstrous demons punishing the wicked in a colorful variety of ways. Classic Bosch.

Interestingly, Ray takes a liking to this work, calling the rest “rubbish” while insisting this one is “quite good.” He and Ken go on to discuss Heaven, Hell, and Purgatory, or “the in-betweeny one” as he calls it. He asks Ken if he believes in the afterlife, or in The Last Judgment, or in guilt, sins, or Hell. Ken thoughtfully answers no, and the scene ends.

In the context of the film, the paintings are particularly poignant because Ray is grappling with a mistake he made while on the job, a mistake which he considers quite immoral (that’s saying something for a hitman). The first two artworks are diptychs, and their structure (double panels) helps to emphasize the kind of black-and-white framework or moral dualism religions often abide by, a kind of morality Ray is currently worried about. It is not totally random that he is drawn to Bosch’s triptych which, while still displaying the harmful consequences of sin, quietly offers, through its extra third panel, a little moral wiggle room—things are no longer simply black or white, but now there is also a vast and bleak middle ground. Perhaps this is the best a hitman like Ray can hope for.

Interesting too, is the positioning of these characters and how they are framed in front of these paintings as a representation their own projected philosophies or ideals. While Ray’s guilty conscience may be hoping for the existence of a purgatory, he is completely enveloped by one half of The Judgement of Cambyses, the scene of the actual flaying, suggesting he's being totally consumed (or flayed) by guilt. In contrast, Ken is seen standing directly in between both panels of Death and the Miser, suggesting his own moral “in-betweeniness” which is further corroborated by his insistence that he does not believe in those strict moral codes Ray seems so worried about. Also, check out their outfits: Ray is wearing black and white, while Ken is fashioning a grey blazer. Whaaat?

Okay, yes, it’s a bit speculative. But that’s why art in movies is so cool! It allows and even encourages audiences to make connections that might not have normally been made. Cool, right? Right. Now go watch a movie and look for any art that might be hiding in the background.

This is the greatest movie! YOU'RE AN INAIMATE OBJECT!