The Art History of Thanksgiving

Spoiler Alert: paintings of the pilgrims are anything but historically accurate

We’ve covered turkeys in art through time, so now we'll explore the history of thanksgiving through art. The first Thanksgiving wasn't that big of a deal, and there are plenty of great myth-busting articles that appear and reappear each November. Let's explore how images of Thanksgiving throughout art history have shaped what we think of as the American story, and the significance of the holiday.

The specific sects of Protestants who settled in New England were generally against the all out revelry and pageantry around Christmas and Easter associated with the Catholic Church, and instead celebrated feast days, one of which would usually fall during or after the harvest. By the 18th century, a thanksgiving holiday marked autumn in nearly every New England colony. 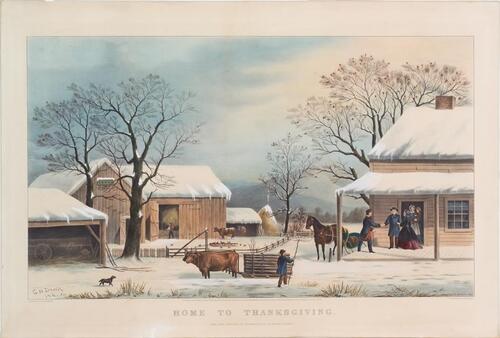 This Currier and Ives print, made after an image created sometime between 1830 and 1860, shows a quintessential New England Thanksgiving. It’s snowy and cold, but there’s clearly a warm fire and huge meal that everyone is rushing inside to get to. The setting of a farm gives a sense of productive self-reliance, and emphasizes the agricultural importance of the holiday. It’s also clear that Thanksgiving has always been a family affair.

It wasn't until the 1850s that the editor of the popular magazine Godey’s Lady’s Book decided that Thanksgiving should really be a national holiday, and began a campaign to have it recognized. The codification of Thanksgiving as a national holiday ultimately couldn't have come at a more opportune time for the United States. 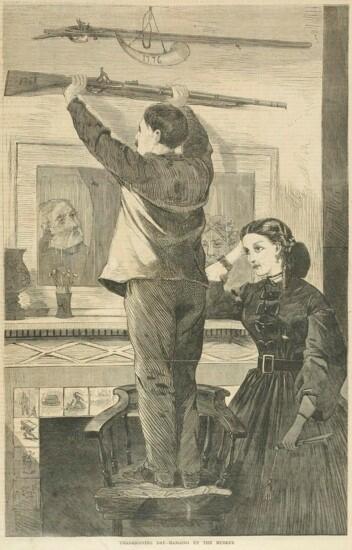 This early wood engraving by Winslow Homer shows the use of the newly official Thanksgiving holiday after the Civil War. Abraham Lincoln declared Thanksgiving a national holiday in 1863, towards the end of the war. Making a centuries-old regional tradition an official and uniquely American holiday was a clear attempt the forge a new national unity and identity. The man standing on the chair in this image hangs a musket used to fight in the Civil War below a musket and powder horn, used in the Revolutionary War, to show a return to peace and home life. Thanksgiving as a holiday is linked in this image with a return to a unified America. Like the image by Currier and Ives, Thanksgiving day is the setting, rather than the focus of this image. The ties to Puritan feast days of spiritual thanksgiving are still strong here, and while the holiday has become distinctly American, it’s still not the Pilgrims, food, and football extravaganza we all know and love.

Pilgrims are a thoroughly modern addition to the celebration of Thanksgiving as a holiday. American history paintings of the late 19th and early 20th century, situated firmly within the colonial revival movement, paint an image of Plymouth and the pilgrims that is instantly recognizable to many of us. The colonial revival sought to define an American aesthetic by looking to the colonial past, frequently focusing on the 17th and 18th centuries. You’ve probably seen one of the most famous paintings, The First Thanksgiving at Plymouth, by Jennie A. Brownscombe, on at least a greeting card. As a history painting stemming from a period in which Plymouth and the pilgrims were increasingly thought of as representative of total Americanness, this work presents a pretty rosy picture of the first Thanksgiving, and of the pilgrims themselves. But, as art history shows time and again, history rarely went down like it did in the paintings. 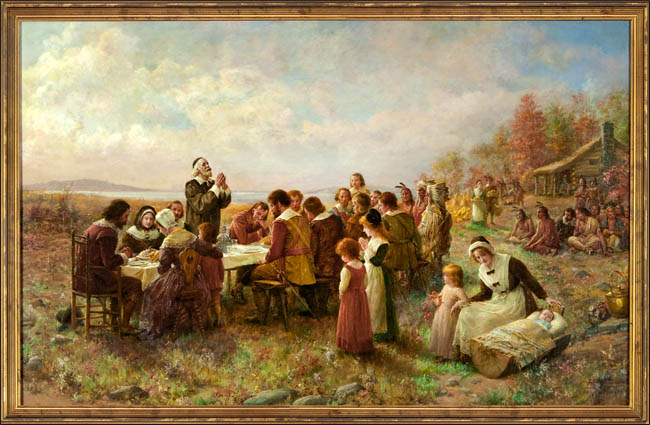 Jennie A. Brownscombe - The First Thanksgiving at Plymouth (1914)

From this painting, we get the idea that the pilgrims wore all black, lived in charmingly rustic log cabins in an open and idyllic landscape. A lot of this is flat out wrong, but our girl Jennie was trying. She just fell a mile short of any historical accuracy. I’d also like to point out that if it’s past mid-October in New England, more than likely you’ll want to be inside and not out in weather so cold it’ll make your snot freeze.

Unfortunately, we don’t really have any illustrations of the first Thanksgiving from the 17th century, probably because the pilgrims were more concerned with surviving than recording one celebration. Nevertheless, this period in the history of Thanksgiving saw the rise of images of Pilgrims, Native Americans, and turkeys all over magazine covers and greeting cards. The popularity of these images cemented the imagined relationship, and a holiday aesthetic blending elements of autumnal and harvest imagery with largely imagined depictions of Pilgrims was born. 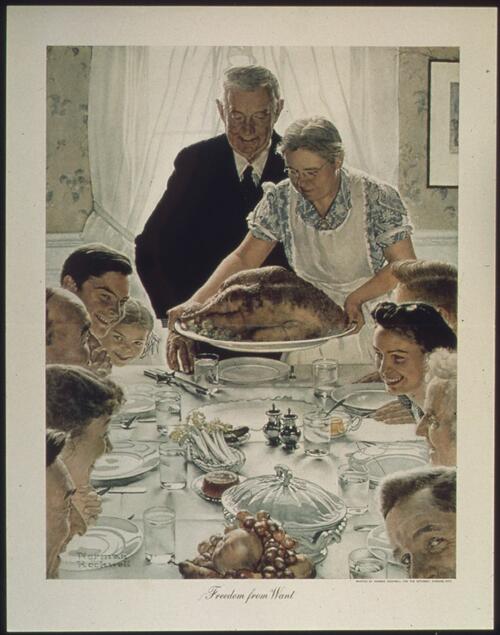 The title of this work comes from a 1941 speech in which Franklin Delano Roosevelt outlined the “Four Freedoms” which he felt defined America and American resistance to fascism. In 1943, Norman Rockwell created a series of four paintings embodying the four freedoms for a feature in "The Saturday Evening Post." In his choice of the Thanksgiving holiday table as the symbol of “freedom from want”, Rockwell blends together various aspects of the history of the holiday, namely spiritual thankfulness and a bounty of food, the create the most well known image of the modern Thanksgiving holiday.

Now that you know all about the history of Thanksgiving in art, go impress your relatives on turkey day!