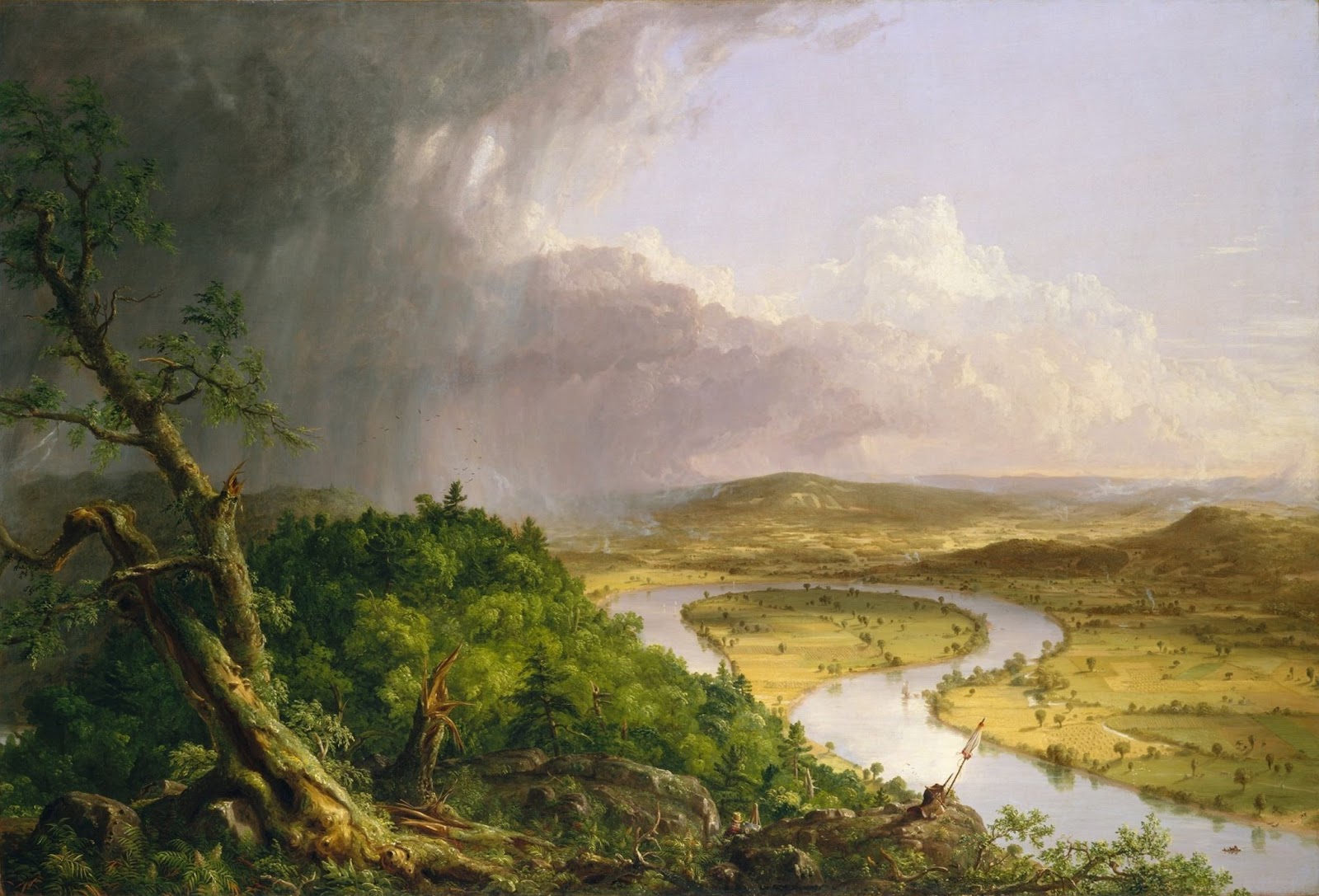 The Hudson River was a group of New York-based landscape painters led by Thomas Cole. Neither a school nor an art movement, the term was coined in 1870 to suggest that the group of painters working in the Hudson River Valley was passe and provincial. Cole was regarded as the “father” and “founder,” but had no special organizational role in the group, aside from teaching Federic Edwin Church, the most successful painter of the school. Originally aspiring to be a history painter, Cole decided to paint landscapes after traveling to Ohio and western Pennsylvania. His big break was when his paintings produced from sketches of the Catskills in 1825 became really popular, which led to commissions, including his magnum opus The Course of Empire.

Cole's dramatic style was influenced by his admiration of poetry, and based on the British aesthetic theory of the Sublime in nature. He applied the theme of wilderness in American literature pictorially, painting the untamed beauty of native scenery. In poetic fashion, Cole often applied allegory to his heroic landscapes, often in a religious sense, like in Expulsion from Garden of Eden and Dream of Arcadia, and sometimes in Classical sense, like in Prometheus Bound. 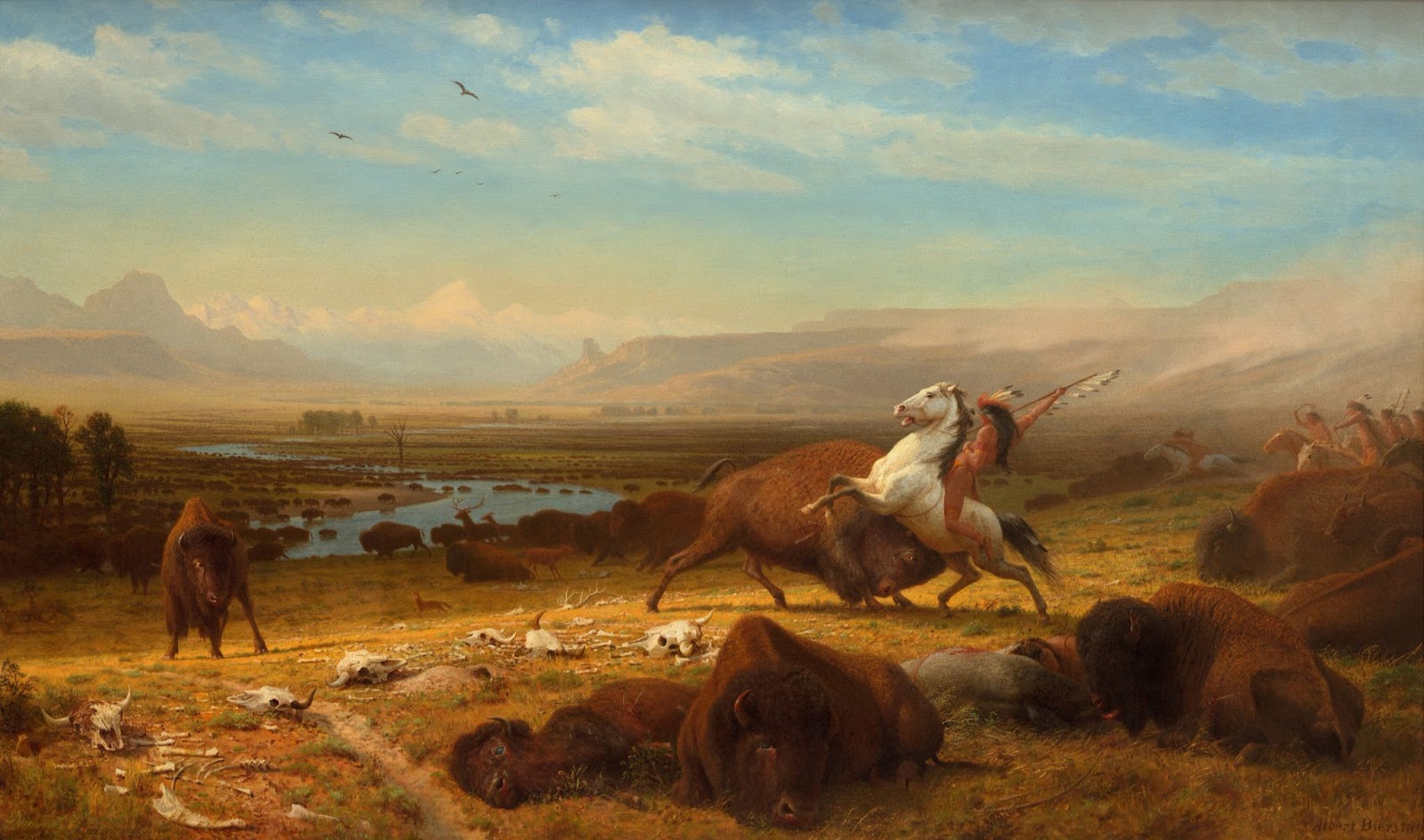 Albert Bierstadt, The Last of the Buffalo, 1888

If Cole was the American counterpart to JMW Turner, Asher Durand was John Constable. Durand admired Constable’s naturalism in comparison to Cole’s dramatic, almost histrionic subjects and styles. He was a big proponent of plein-air painting, sketching outdoors in oils and loosening the authority of Sublime aesthetics. Most of the Hudson River School tended towards the Durand approach, with the exception of Church and Albert Bierstadt who continued to paint in the heroic style of Cole after his death. The second generation of Hudson River School painters left New York in order to documentthe concept of Manifest Destiny in America’s westward expansion, like in Bierstadt's the Last Buffalo, and images of the unspoiled West in hopes of reconciliation during the Civil War, like in Church’s Aurora Borealis. 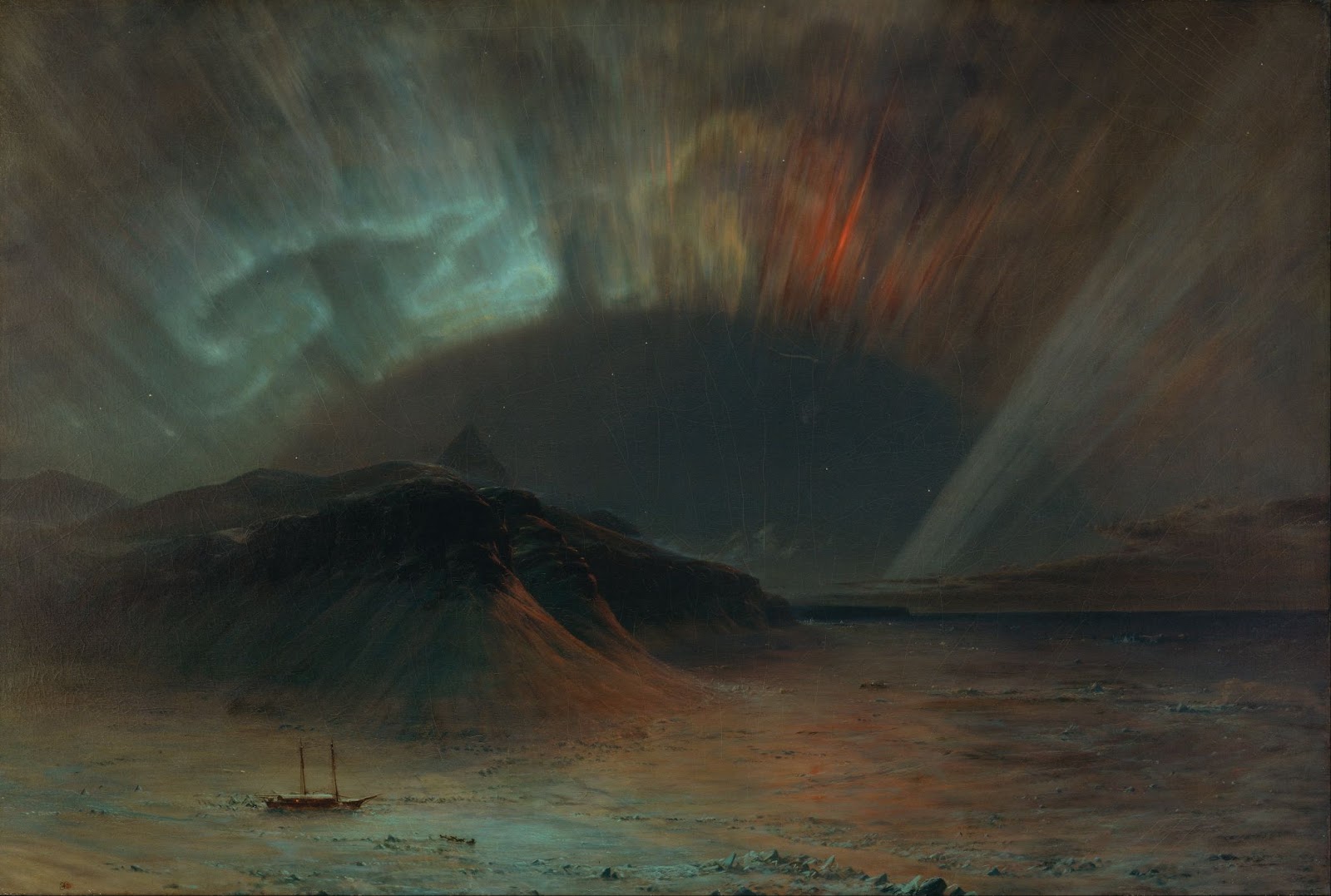 The embrace of landscape painting can be understood as a reaction against industrialization, a lament of what was lost in the process of modernization. Hudson River School artists trained in Europe, adopting the styles and subjects of Old World artists and applying them in recognizably American scenes in the effort to create a distinct and legitimized American tradition. Cole’s treatise Essay on American Scenery identifies the wilderness as an essential part of American identity distinct from “civilized Europe” whose primitive features have been destroyed and modified. Thus, in his call for contemplation of nature through landscape painting to “sublime and purify thought,” Cole and the Hudson River School glorify nature as a sign of American moral superiority,  in true American exceptionalist rhetoric. By imbuing the scenes with symbolism and allegory, the landscapes were intended to be an immersive and transformative experience for the viewer both intellectually and emotionally, a religious experience intended to cast the mind into “contemplation of eternal things.” The deification of nature as a moral idea recalls the original Protestant mission to regenerate man from the vices of Europe, but this time in the wilderness of the New World. By presenting a polarity of good and evil through the goodness of nature and the evils of urban life, the paintings present an image of America as the Garden of Eden where nature is elevated and national character is closely identified with the frontier.

In conclusion, the Hudson River School was a group of landscape painters originally based in New York’s Hudson River Valley who shaped American identification with its wilderness. Promoting and documenting Manifest Destiny, their works resist industrialization, identified as the source of European corruption.

I always loved to write, especially artistic texts. I really like the literary direction of the stream of consciousness. This is my favorite genre. This has its drawbacks, of course, because I can’t quite write concisely and structured, so for example, for writing an essay in college, I use the service research proposal help https://www.phdresearchproposal.org/ .The guys really help me with writing and editing my texts.

This is very interesting for me. It becomes clear that there were talented artists in this school. I concluded that reading both prose and poetry affects development in general. It has always been so.

I used to live in this area and it won't ever look this beautiful.

The HRS is seriously so boring.