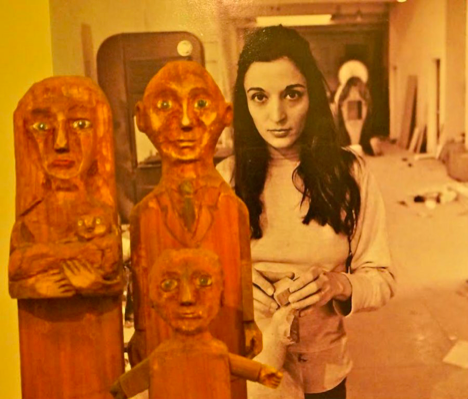 Andy Warhol called her “the first girl artist with glamour.” A random admirer said she was the “Latin Garbo.”  Whatever you want to call her, Marisol Escobar, or just Marisol as she dramatically preferred, was one of the chicest, hippest artists to come out of the Pop Art movement. 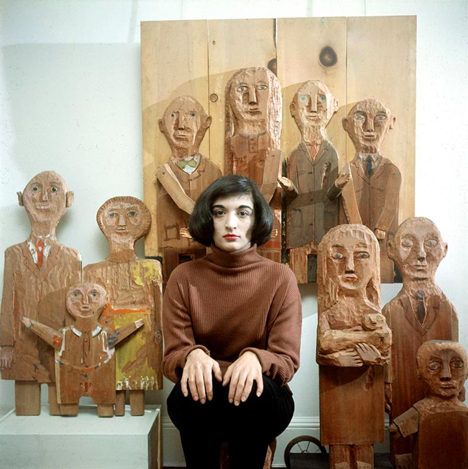 Marisol’s folky, pop-art sculptures are a reflection of hard work and good taste accumulated through her many travels. She once said that her fame “happened because I made it happen.” True enough, but being born in Paris to globetrotting parents from Venezuela’s upper crust gave her a good start.  Tragically, her idyllic, creatively nurturing childhood and adolescence were cut short by her mother’s suicide when Marisol was 16. Devastated, she threw herself into religion and art. She barely spoke to anyone for years and would walk on her knees until they bled as an act of penance. Perhaps hoping to provide a healthier outlet for her grief, Marisol’s father sent her to Paris in 1949 to study art.  After a year she moved to New York where she quickly became friends with some of the biggest names of the day including Pollock, Franz Kline, and Willem de Kooning (with whom she had a passionate affair). In 1951, after exposure to pre-Colombian artifacts, Marisol abandoned painting and drawing and began focusing on the sculptures that would make her a superstar. 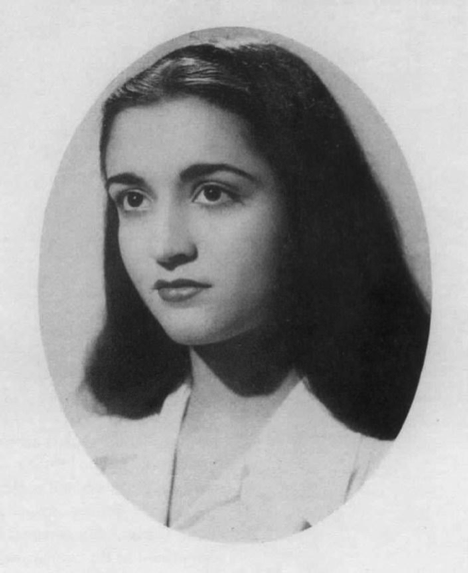 With the bone structure of a pre-Colombian goddess, mystique of a tragic aristocrat,  jet-setting lifestyle and killer sense of fashion, Marisol became the overnight darling of the image-obsessed New York art scene.  Marisol herself admitted, “ I was promiscuous…I was a bohemian… I was stoned on marijuana all day and all night.” Whatever she was doing it worked.  Her art alone was praised during her first major group show in 1957, featuring future such big names as Jasper Johns and Robert Rauschenberg.  She got her first solo show as a direct result of the group show before either of the men, not an easy feat in the male-dominated scene of the time. 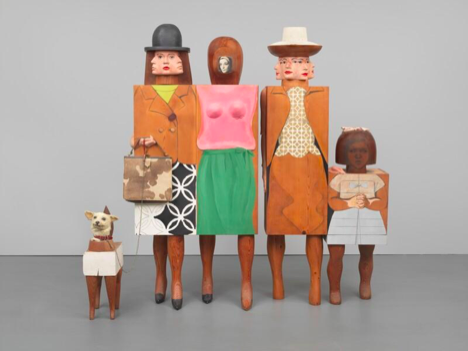 Women and Dog by Marisol in the Whitney Museum of American Art. One of the artist’s most popular works.

Marisol became a staple at parties and panels, notorious for her dry wit and cool style. Once, while participating in a panel discussion for The Club, a mostly male artist collective, she showed up wearing a white mask.  In a move fit for Lady Gaga, she removed the mask with encouragement from the crowd to expose her face covered in white makeup to replicate the mask.  She was so cool that Andy Warhol got invited to parties because he was with her. 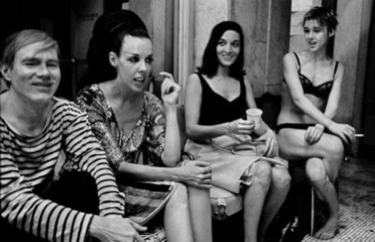 By the late ‘60s, the hangover finally set in and Marisol decided she was so over fame.  She dropped everything to travel. When she returned in the ‘70s she had “lost interest” in producing art for the general public.  Apparently being born in Paris fills you with a natural ennui. 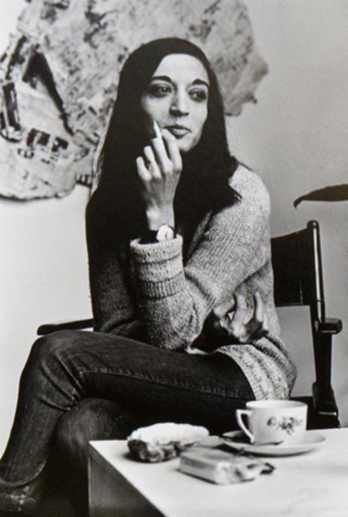 Following the ‘70s, Marisol’s once blazing fame dimmed to a respectable but less conspicuous profile than pop art associates like Warhol.  Some of this must be attributed to her enigmatic persona and elusive private life in later years.  One is also tempted to pull the woman or “ethnic” cards, but Marisol played with a deck too varied and label-defying for the pulling of such mundane cards.  It is overly simplistic to apply the narrow label of pop art, or even her officially designated title of Nouveau realisme, pop’s pretentious French cousin.  Her work has a pop spirit, but with a traditional craftswoman’s commitment to hands-on, structural innovation, and a folk art sensibility too primal for pop’s self-conscious postmodernity…no inhibition or underlying pretext of being a part of a movement.  To put it directly (as Marisol would have wanted), she loved to make art, so she made it.

In her own words:

“I never made a decision.  It came very naturally that I knew that I wanted to do that.” 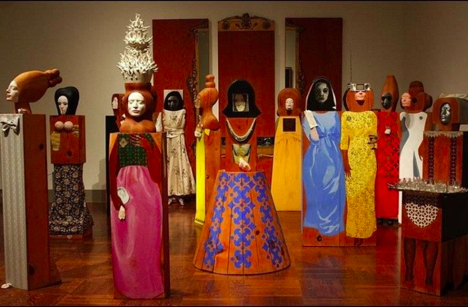 The Party by Marisol Escobar:  Jet set glamour with a crude edge…Breakfast at Tiffany’s meets folk.

Those of us in Hawaii have particular cause to mourn Marisol, as this most urbane and continental of artists is a surprisingly ubiquitous figure in our remote, Pacific island art scene.  The quirky reverence with which she memorialized our beloved local hero Father Damien, who gave his life serving lepers on Molokai, is a testament to her peculiar ability to simultaneously caricature and humanize a monumental figure. 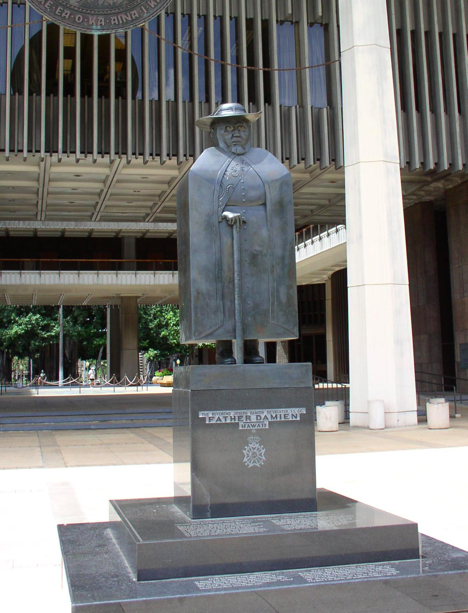 Colleague Alice Neel’s portrait of Marisol is a favorite in the Honolulu Museum of Art, and was one of the museum’s staff picks in 2015, a hauntingly frank tribute to Marisol’s statuesque maturity in her post-glam years. 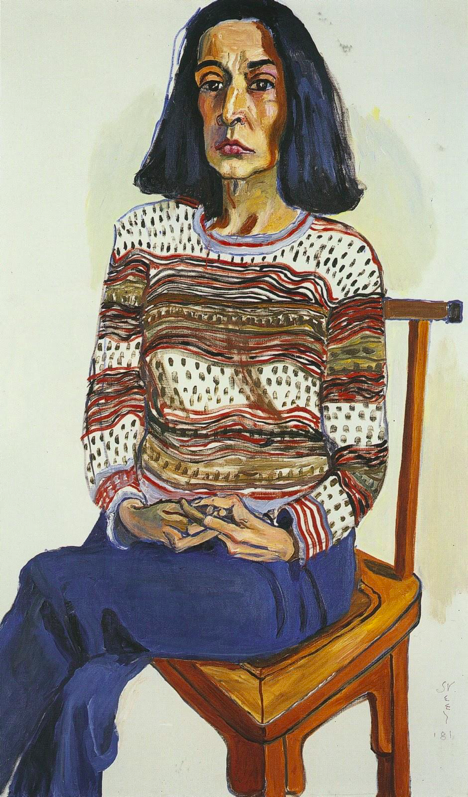 Marisol Escobar by Alice Neel, in the Honolulu Museum of Art.

After exiting the celebrity scene and traveling the world, Marisol resettled in New York and worked privately in her studio with an unflagging drive to produce art right up to the end,  despite failing health.  She died in her adoptive metropolis on April 30, 2016 from pneumonia.  She was 85. 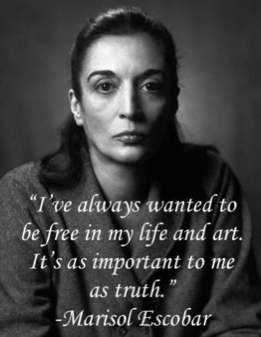 We’ll miss you, Marisol.  You lived freely.  You walked in truth.

By: Sarah Oesterling and Griff Stecyk