We are lucky here in San Francisco to have the Obama Portraits available to view in person. The National Portrait Gallery’s tour of these portraits began in June 2021, and the original five-city tour didn’t include San Francisco. However, interest in the exhibition was so great that two cities were added to the tour, giving the opportunity to view these portraits in person to as many Americans as possible. If you get the chance to see them while they’re here (which might be hard; before opening weekend De Young had already pre-sold 10,000+ tickets) then don’t miss the chance to do so. They really are different when viewed in person.

A Pilgrimage of Sorts

Going to see the Obama Portraits has been described as a secular pilgrimage. Senior exhibit curator Timothy Anglin Burgard would go so far as to say that we don’t need to include the “secular.” There is an undeniable celestial, spiritual element to each of the portraits.

Yes, we can see them online (most of us have.) In doing so, we can recognize their importance in both American history and art history. But only when standing directly in front of the real thing can we feel their full magnificence. Only there can we feel what toddler Parker Curry felt as she stared up at Michelle Obama’s portrait, an image that went viral immediately, because we could all sense the power of representation for this little girl.

These paintings show leaders in a way that we have never seen before. It’s not just because this President and First Lady are different from those that preceded them, though they obviously are, but because the artists of each flipped traditional presidential portraiture on its head. They’ve given us something fresh and new, a vision for what could be.

A History of Presidential Portraits

Before you enter the room where the portraits are on display, you’ll have the opportunity to watch a short video, less than three minutes, from the National Portrait Gallery. Take the time to watch it.

As you see some of the scenes of other presidents’ portraits, notice how similar they all are. Democrat or Republican, twenty first century or nineteenth, every single president’s portrait looks almost exactly the same as all of the rest. The presidents have a serious look, a similar suit, a certain “presidential air.”

The Obama Portraits are no less serious, no less professional, no less powerful (arguably even more so.) But they are so very different. Obviously, it’s striking to finally see the first Black president’s portrait hang up on those walls. But Barack and Michelle Obama also chose extremely unique contemporary artists who produced very original work. Barack is shown surrounded by lush greenery and flowers, ready to leap from his chair and get back to business. Michelle is shown in a beautiful, sleeveless, quilt-inspired gown, her strength and poise emanating equally from the image. The portraits make a statement that things don’t have to be the way that they have always been. They can progress. They can be different. They are already different (despite, obviously, the significant amount of work we still have left to do.)

A portrait represents identity. It says, “I am here.” It says, “This is who I am.” The Obama Portraits hanging in the National Portrait Gallery means representation of identities that have formerly been excluded. They are here. 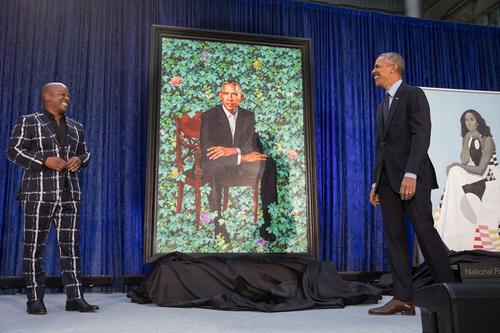 Kehinde Wiley is best known for his “streetcasting,” through which he uses ornate baroque painting and details to bring a regal, powerful air to everyday Black people he encounters and engages to sit for him. Obviously, Barack Obama isn’t a person you're likely to simply pass by on the street. But Wiley’s style manages to celebrate his power, capture his humanity, and elevate it all into something MORE in a way that is undeniably powerful. As you stand in front of the portrait, ask yourself, “is this life size?” It’s hard to tell. The consensus seems to be that it’s about ten percent bigger than life size, and somehow this seems perfectly fitting with how we want to capture this president in history.

There’s so much to see in this painting. Take your time. Each flower in the image represents a part of Barack Obama’s history - lilies for Kenya, chrysanthemums for Chicago, and three closed-bud roses representing DC, suggesting that the future is here, ripe, but not yet blooming. These flowers, and the lush leaves filling every inch of the huge canvas, also represent more than the president’s biography. Flowers are typically associated with women and femininity; in art history, they’ve more often been painted by women. Here is a Black male painter painting a Black male president with all of these beautiful flowers, giving us a new idea about what powerful masculinity can look like - abundant, fruitful, and beautiful.

Fun Fact: During the press tour for the Obama Portraits at de Young, the curator mentioned that he’d noticed something unique as they were hanging the images. Artists often sign the backs of paintings. On this one, Kehinde Wiley signed not only his name but also added, “the greatest president in history.” 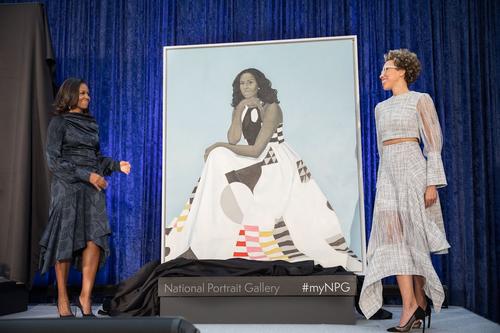 We also, of course, get a new vision of what female strength can look like. Amy Sherald’s portrait of First Lady Michelle Obama isn’t anything like Wiley’s, although the two complement each other well, much like the real people the portraits represent. Instead of a busy background, Michelle sits against a light blue sky. She herself takes up almost the whole portrait, her beautiful dress cascading all the way down to both bottom corners of the canvas. The effect is that she looks like a solid, powerful mountain. And yet the draping folds of her dress, with the shape of a heart suggested in the center of painting, are welcoming, as though she is the ideal mother who could hold the whole country in her lap.

Sherald’s style is to use gray tones for skin in her portraits. This de-centers the importance of race in favor of first noticing humanity, while not at all taking away from the issue of race. The style of this portrait was inspired by Du Bois’ American Negro series from the 1900 World’s Fair, paintings that are essentially just regular people doing regular things except that depicting them was radical because the people were Black. In a way, we are just looking at a portrait of a woman in a dress with her hand on her chin; but she is the first Black female First Lady, and for a Black woman to paint her for the National Portrait Gallery is radical in itself.

The Obama Portraits Together

The portraits hang side by side on the wall at de Young Museum. Across from them you’ll find information about the artists and the work that they did on these portraits. You will also see versions of the original photographs that the artists took from which they worked on their paintings. You might notice something interesting - Barack Obama’s portrait was taken in a studio on a blank background, but his painting is filled with leafy color. Michelle Obama’s portrait was taken outside in front of nature and yet her portrait has a blank background. It’s interesting to see how each artist approached their process, brought their personal style to the job, and collaborated with their muses. A portrait is a collaboration, after all.

Together, these portraits say so much, even more than what they say individually. Each artist did their own work without collaborating with the other. The scale of the two portraits is not the same. The style is distinct. The details focused on are different. And yet, there’s a symmetry between the two, a companionship, a partnership. Each has their wedding ring prominently displayed on their fingers. Each has a spiritual element (Michelle against that blue background, Barack’s feet seemingly not really touching the ground.) They’re both wearing clothing atypical of their roles (he is without a tie, two buttons undone on his shirt, she is wearing a sleeveless dress in a quilt-inspired print.) Her mouth is slightly open; perhaps she is about to speak. His face has an expression that’s hard to pinpoint; he’s alert and focused and yet perhaps about to smile. She is not merely his wife; she is the First Lady. He is not just the President, but also her partner. We see in these two portraits both their full individuality and the power of togetherness in a presidential marriage. 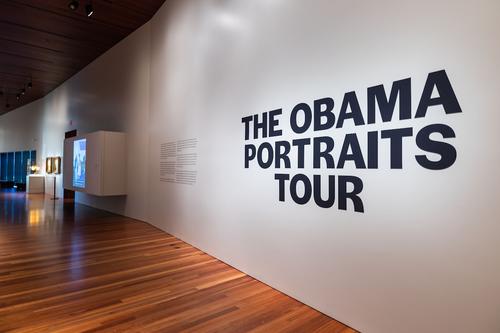 The first Black President and First Lady. The first Black artists representing them. The first in terms of unique art style for these types of portraits. And also, the first tour of a president’s portrait. Although a president’s portrait might occasionally travel from the National Portrait Gallery for a specific exhibit (it’s happened but is super rare), never before have the portraits traveled in a show specifically so people could see them. More than four million people have gone to see them since they started their tour last year.

The Obama Portraits Tour is on display at de Young museum through August 14, 2022. The museum is working in partnership with several youth organizations on special events. On June 25, they’ll have Power and Creativity in Portraiture with First Exposures, a pop-up portrait studio with youth photographers. On July 30, they have Art, Fashion, Activism with Youth Art Exchange. And on August 6, they offer Poetry and Storytelling with 826 Valencia and Oakland Poet Laureate.

I love your posts!