Mental Health Art History: Misère (and the Ethics of Depicting the Poor in Art) 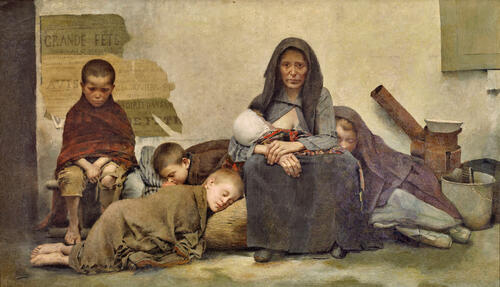 Depression is an individual condition. It may be widespread but when you go to the doctor and get the diagnosis, it’s all about you. In fact, we’ve previously profiled ten artists who created impressive works despite this diagnosis. Misère, on the other hand, is a societal condition.

Let’s face it: when there’s only a “poor” group and a “rich” group, the people in the former group have a lot of different feelings. It’s only normal to feel rage, frustration, inequity … and when you combine the financial status with intersectionality issues (gender, race, etc.) then you experience even more emotion. More than anything else, you can begin to feel both helpless and hopeless. That’s misère. It’s beyond depression. It’s depression from the weight of the unfairness of the world.

Linda Nochlin explores this condition in depth, through an art history lens, in her book Misère. Looking at the work from this period, we can see the intense desperation that accompanies this depression. We can also see that it’s been a problem for well over a century, across different parts of the globe, and it’s not likely going away anytime soon even though we tend to ignore it in mainstream art critique today. After all, who wants to look closely at how depressing it is to live a low-income existence while living in times that are extremely prosperous for a select few? Just thinking about it is depressing. Plus, as Nochlin delves into, portraying this type of depression in art brings up some serious ethical questions. 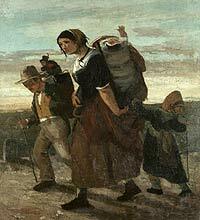 Nochlin’s book was inspired when she picked up a 19th-century book on the topic by sociologist Eugene Buret. She draws heavily on this book. However, she doesn’t focus so much on the condition itself. She leaves that to the sociologists. Instead, she shares insights into how this condition was represented in 19th-century art. She found:

In other words, we see misère depicted in art we recognize from galleries. However, we also have to look at more humble artforms, such as book and newspaper illustrations, to truly grasp this art. After all, how can we talk openly about the miserable disparity between rich and poor if we look only at “high art”?

Gustave Dore: An Illustrator of Misere

Gustave Dore is one of the first artists Nochlin draws attention to. He was an engraver/illustrator whose works showed up in many important mid-late 19th century writings, including Dante’s --Inferno. He also did work for a 1972 book called London: A Pilgrimage, which depicts the growing misère in London thanks to the riches of the industrial revolution. 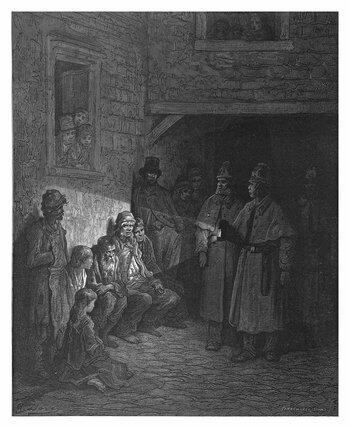 One of the works she points out that is especially relevant today is Bulls-eye. It uses light and shadow to dramatically capture the unfair distribution of power between policemen and a group of people in poverty. He plays powerfully with light and dark, and you can’t help but notice that the policemen wield the bright lights while the impoverished are merely stuck in its glare. You can’t look at this today without seeing not only the misère of 19th century London but also the very real 21st century conflicts that people of color and low-income groups face with police and prisons today. 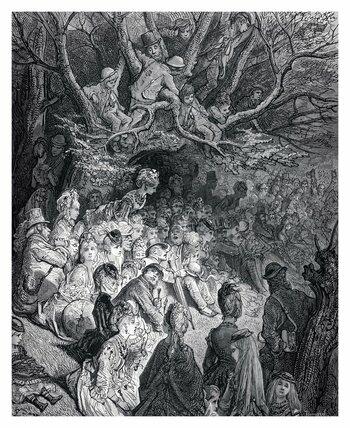 The River Bank - Under the Trees is another poignant Dore piece. It’s a scene of people who are watching boat races. The rich people under the trees are well-dressed, delighting in the leisure of a picnic lunch. Seeing the image, you might call them “ladies and gentlemen.” Above them, a bunch of poor people creep around in the trees, trying to get a good look at the boat races from a crowded, depressed position. You might call them “ragamuffins.” The title of the piece indicates that we shouldn’t even pay attention to them; the only people that matter are the beautiful rich people “under the trees”. 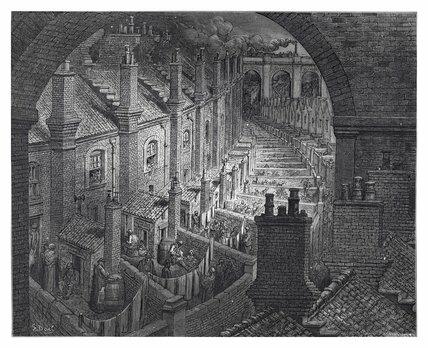 Let’s look at one more Gustave Dore piece: Over London - By Rail. Nochlin describes this so well, saying, that it “at once brings out the modernity of the great city and the dehumanizing mechanical repetitiveness that modern advances like the railroad bring to those who live in their shadow.” Of course, the railroad is no longer modern today. But you need only to look at San Francisco - a rich city that the Salesforce Tower now looms over while homeless people sh*t in the streets due to a lack of affordable housing and services - to see that the misère that plagued 19th-century London remains relevant today.

Gender and Misere in Art

Men and women are frequently depicted differently in images of misère. Historically women have often turned to sex work as a way to make ends meet for their families when there weren’t other options. 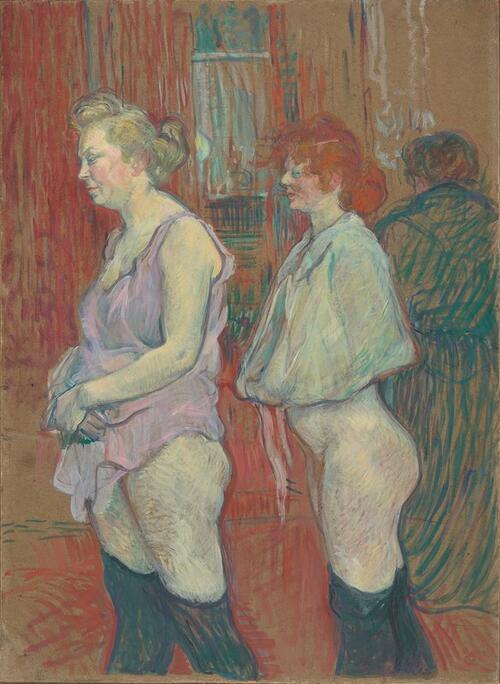 Artist Toulouse-Lautrec was famous for his depictions of women in brothels but what do we really know about their lives? The Medical Inspection shows two women lifting up their garments for an examination that suggests they may be diseased or unclean. Nochlin wryly notes that there are no comparable depictions of the johns getting tested for disease. 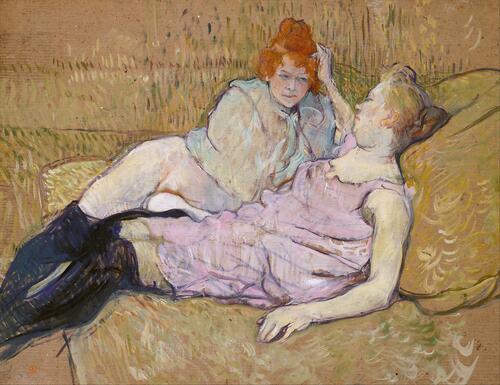 We can make a lot of inferences about this from our own 21st century understanding of the power dynamics in sex-for-purchase relationships, but we can’t see it in the pretty picture he has painted. Likewise with the image of two at-rest prostitutes in The Sofa, who seem to be happily enjoying a conversation while waiting for the next customer. 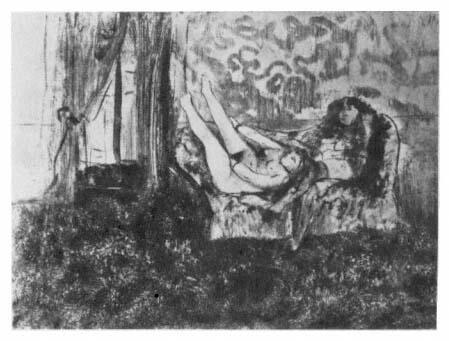 Degas’ drawings in The Brothel Monotypes paint a completely different picture of the women. Intriguingly, he does place men in the images, as small near-afterthoughts in the corners. The effect is definitely different from Toulouse-Lautrec’s work, but still, this is a man telling a woman’s story through art. What can we understand of the impoverished prostitute’s misère if we don’t hear from her herself?

The Irish Famine, Proto-Documentary, and the Ethics of Depicting the Poor in Art

One of the most important points Nochlin brings up is that there are ethical considerations when we depict the poor in art. She introduces the subject in an early chapter about the Irish Potato Famine. People were dying of starvation in those days. Starvation is an ugly horrible thing. It’s not a pretty sight. So how do you depict the reality of it without making the poor seem so grotesque that others can’t have sympathy for them or making them so “cute” that they get only pity? It’s a conundrum. 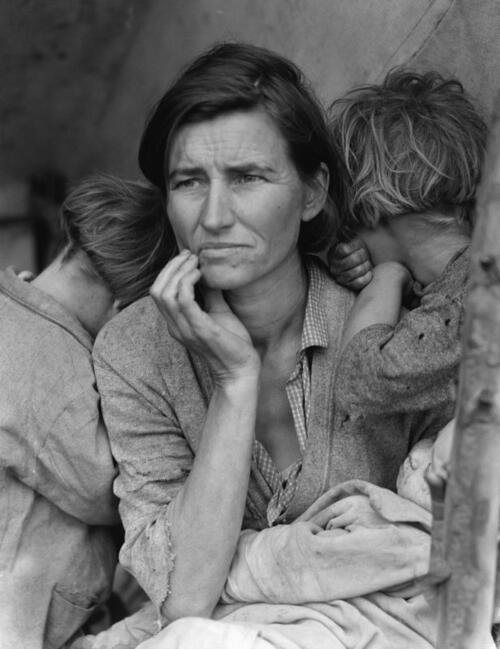 Nochlin reports that newspapers, as well as other popular publications such as Harper’s Weekly, frequently depicted illustrations of the Irish poor. Notably, the readers of such publications were primarily richer London folks. For example, The Illustrated London News published worked by Irish artist James Mahony. In doing so, the paper warned people of the “graphic results” they were about to see. There was a series called Boy and Girl at Cahera featuring two starving, rag-wearing teens desperately trying to dig potatoes out of the ground. As Nochlin points out, the image immediately brings to mind images of 1930s Dust Bowl art (such as work by Dorothea Lange) and the starvation of Holocaust camp survivors.

We have to share the truth about these experiences. But it’s a tricky task. When sharing information and images in a newspaper, it’s important to be factual. You can’t gloss over the horror. However, if you do it sloppily, you may cause people to blame the poor or just feel disgust or pity for them, rather than challenging them to rise up, face the problem of inequity, and come together as a society to solve problems. Documentaries of today are different in many ways from these proto-documentaries that depicted the Irish Potato Famine, but both art forms bring up these ethical questions.

What about high art, rather than what’s depicted in journalism? Nochlin points out that when you do see images of this time in paintings and drawings, the effects of starvation tend to be minimized. An artist can depict things as they please, but if they’re working to earn money, then they also have to please their customer base. Who wants a painting or sculpture of a skin-and-bones person barely hanging on to life? Placing it in a nice home would induce guilt, and art buyers don’t want to feel guilt. 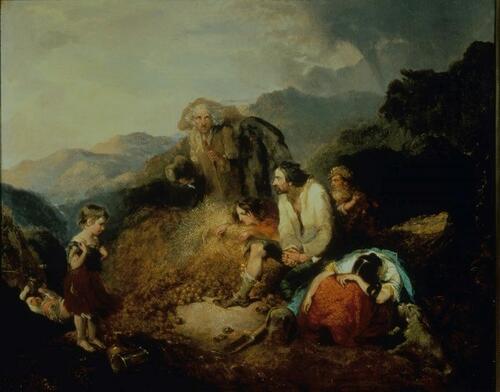 Nochlin points to painter Daniel MacDonald as someone who straddled this line well in terms of the Irish Famine. Work like An Irish Peasant Family show the impact of starvation on multiple generations of a family. However, the depiction is subtler, with much more pleasing colors, than you’d find in a photograph of the reality. That said, we have to consider how such a photograph not only depicts suffering accurately but also exploits the family in the image.

It draws to mind that scene in "RENT" when the videographer is filming abuse of homeless person who says, “Bleeding heart cameraman, my life’s not for you to make a name for yourself on.” Then continues, “Hey artist, got a dollar? I thought not.” 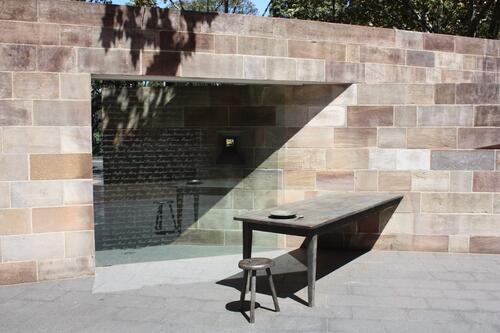 The author sums up this chapter by drawing attention to modern-day memorial art as one solution for artists who want to create powerful works of art without exploiting the poor. Abstract visual art with accompanying text can relate the serious importance of the subjects of poverty without requiring people in poverty to pose for a picture. They don’t even require the use of the human figure at all. One example is Australian Monument to the Great Irish Famine, which is a lone table, with a single stool, done in gray hues and accompanied by the names of women resettled during that time. 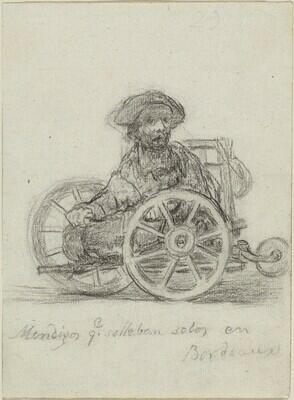 Here are some of the other artists/works Nochlin draws attention to for their depictions of misère:

Some of these highly famous works deserve a fresh look with an eye towards the art - and ethics - of depicting misère.

This post is part of our series on Mental Health Art History: Artists Creating Despite A Diagnosis. We've previously covered bipolar artists, artists with schizophrenia, and ten artists with depression.