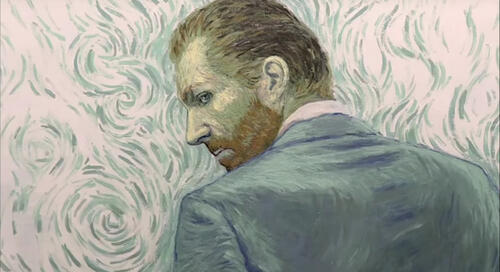 Plotwise, Loving Vincent is a bit like Citizen Kane. Both have a slow-paced biographical narrative told from the perspectives of the people who knew the dead main character, but not the main character himself. The plot goes like this: Vincent Van Gogh has already died. His dear friend Postman Joseph Roulin, played by Chris O’Dowd (Bridesmaids, The IT Crowd), can’t deliver Vincent’s final letter to his brother, so he designates the task to his son Arnaud, an angsty 20-something year old (portrayed by Douglas Booth, who looks a lot like Chuck from Gossip Girl but isn’t).  At first Arnaud is reluctant, but eventually becomes interested in Vincent’s death and takes it upon himself to determine whether Van Gogh’s death was actually a suicide, as widely believed, or a murder. Without giving too much away, the movie does an excellent job at uncovering Van Gogh’s life while also acknowledging the unfortunate truth that much of his life is only realized through the lens of his death.

So who’s in this move? A great cast- and not for voice acting. The actors performed in front of green screens as live-action references for the artists, similarly to how old Disney movies were drawn/filmed. The cast included Jerome Flynn from Game of Thrones as Vincent’s doctor Paul Gachet and Saoirse Ronan from Lady Bird as Gachet’s daughter Marguerite. Also featured are Helen McCrory from Harry Potter and Aidan Turner from The Hobbit.

But as you probably could have guessed, the most impressive part about Loving Vincent is the artwork behind it. You know when you see a painting somewhere and thinking, “How the heck did they do that?” That’s basically how it feels watching this movie. The attention to small details seems hard enough to recreate in a still painting, but to animate them while keeping a painterly style is what enables this movie to stand out so clearly from other biopics or animated films. I mean, look at these details!

A team of 125 classically-trained oil painters worked for years on the project, producing around 65,000 hand-painted frames. Their work couldn’t have been more faithful to Van Gogh’s artistic style. The transitions between scenes are beautifully smooth, and the references to some of Van Gogh’s lesser known works are subtle but still recognizable.

Just as Van Gogh did with Starry Night, the animators of Loving Vincent portrayed light as restlessly dynamic brush strokes that change color on a character’s moving face or position around a flickering lantern. It’s a simple but crucial detail that perfectly captured the feeling of Van Gogh’s work.  Even in still scenes, there manages to be movement; even while suffering from severe depression, Vincent Van Gogh managed to see beauty in life.

There’s honestly no experience like watching Loving Vincent. These GIFs definitely don’t do the film justice. If you enjoy Van Gogh’s artwork (and let’s be real here, who doesn’t?), check out Loving Vincent, still playing in select theaters worldwide until the DVD’s release on January 16, 2018