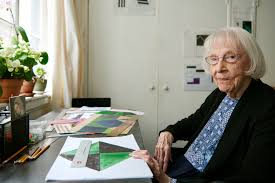 It’s not that anyone did anything explicitly bad to Carmen Herrera. It’s just that no one did anything at all. She and her art were systematically ignored for a half a century because she was a woman. She only rose to fame as an 89 year old woman. This would be fine if she had started painting at 70 like Grandma Moses, but she began painting as a young adult and was making work that was as good as or better than Frank Stella and Ellsworth Kelly at the same time that they were making it. Herrera is a glass half full kind of girl though and explained that being ignored was, in a way, liberating because she could do as she wished without the weight of expectation.

But she also said that it would have been nice to have been discovered a little earlier, which seems like a dramatic understatement seeing as she is literally 103 years old. On top of all of this, when she finally was discovered, there was a huge hoopla about her as if she appeared out of thin air and hadn’t been making art in the East Village in New York City just like everyone else.

Carmen Herrera was born in Havana, Cuba in 1915. She was one of seven children – five boys and two girls. Her older brother had moved to New York City to work for NBC and met a man by the name of Jesse Loewenthal. Her brother insisted that he come back to Cuba and meet his family. He visited three years in a row and on the third year, he and Carmen were married. Despite all of the rampant sexism of the time, their relationship was built on equality and Jesse always believed in her artistic talents. He died in 2000 and didn’t live long enough to see her discovered – another reason why the art market sucks in this scenario. Carmen says that her “only regret is that he didn’t live to see her success.” Ughhhhh. My heart.

Jesse wasn’t crazy to believe in Carmen either. It’s not like no one liked her work. People were interested right up until they figured out that she was a woman. On one occasion, there was a curator by the name of Rose Fried and she liked Herrera’s work immediately upon seeing it. So Carmen went over there and Rose Fried said, “You know you can paint circles around the men artists that I have, but I’m not going to give you a show because you are a woman.” She sort of covered it up by saying “she had to give the men shows because they had families to maintain,” but they both knew this was a poor excuse, and also low key a punishment for Herrera never having children of her own. All in all, this was some Mean Girls level BS, even for the mid-20th century. I mean what kind of woman would say such a thing. And especially a woman in a leadership position, who knows how hard it can be to succeed with that type of discrimination out there.

So, fast-forward to the year 2004. Herrera is 89 years old, and miraculously still hasn’t given up on her dream of becoming a famous artist. She makes work everyday but up until now it hasn’t been "feminine" enough for critics. The clean, decisive lines of her work was the kind of art that was to be left to the men – Frank Stella, Barnett Newman, Ellsworth Kelly. But since Herrera apparently has the patience of a Buddhist monk, she waited for the critics to change their minds. It only took 60ish years but they eventually came around, and saw that Herrera was a star. She now has had exhibitions in the top American museums, and sells work for hundreds of thousands of dollars.

But it’s a little too late. Just when she was discovered, her body started deteriorating and now Herrera cannot make work on her own. She has employed full time help, but it still takes her much longer to create work than it did in her youth. Just imagine what she could have done if only she were discovered at 70 rather than 89. The art world sucks sometimes.

Happy to have my lover back after 3 months of breakup, thanks