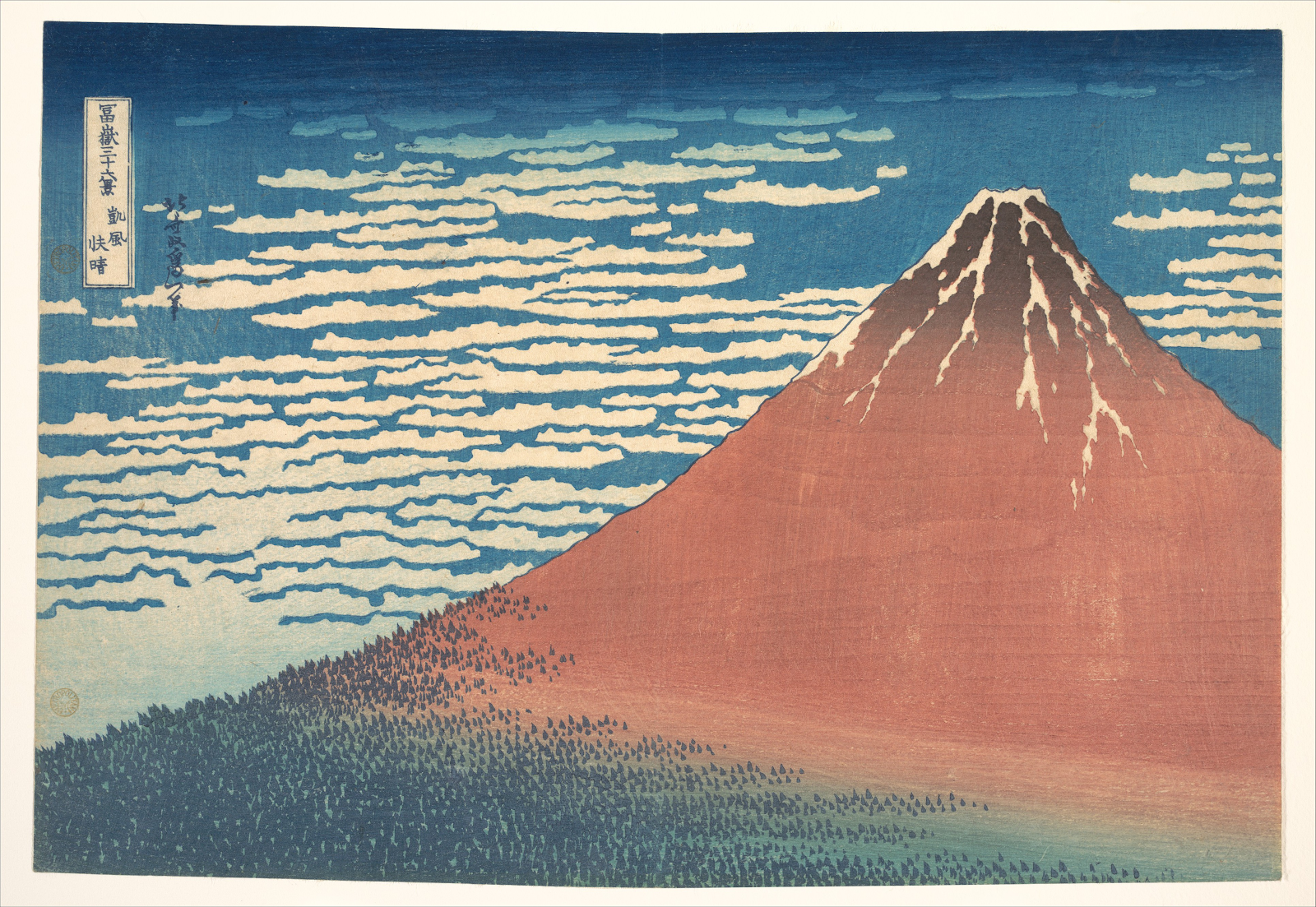 The power of Edo period art can best be summed up with this quote:

“From the age of 6, I had a mania for drawing the shapes of things. When I was 50 I had published a universe of designs. But all I have done before the age of 70 is not worth bothering with. At 75 I'll have learned something of the pattern of nature, of animals, of plants, of trees, birds, fish and insects. When I am 80 you will see real progress. At 90 I shall have cut my way deeply into the mystery of life itself. At 100, I shall be a marvelous artist. At 110, everything I create; a dot, a line, will jump to life as never before. To all of you who are going to live as long as I do, I promise to keep my word. I am writing this in my old age. I used to call myself Hokusai, but today I sign myself 'The Old Man Mad About Drawing.”

You know the Edo period, you just don't know you know it.  You've seen it on shower curtains, mugs, dish towels, socks….it's The Great Wave by Hokusai. It’s everywhere. What you most likely don’t know is that The Great Wave is as much about Mt. Fuji as it is about the wave. The great wave is framing Mount Fuji off in the not-so-far distance. This print is from a series of prints known as the "36 views of Mount Fuji." The Edo period was obsessed with Mt Fuji.  Edo period artists were also interested in portraying theater, sumo wrestling, and beautiful women, capturing the life of the Yoshiwara (red-light) district of the city of Edo (which is now Tokyo). The term for this is “Ukiyo-e”, which translates to "picture[s] of the floating world." It was a style that lasted for over 200 years.

The Edo, which was approximately from the 1600s to the middle of the 1800s, was a time when the arts flourished in Japan. Theater known as kabuki and the visual arts were in high demand, which is quite odd because the Edo was also the time of the Shogunate, a hereditary military dictatorship. That’s those rascally Shogun and Ninja warriors we love some much in our movies. The Shogun ran a tight ship. They enforced a policy of no contact with the outside world and maintained an extremely strict social hierarchy. If you were a farmer, you and your family would always be farmers. If you were born into a craftsman family you were destined to be a craftsman, and so on for every social class. Craftsmen were just one step higher than merchants, who were at the bottom of the heap. You guessed who was at the top of the hierarchy, right? The Shogun, of course.

One of the major art forms was the woodblock print. In mini-factories of art, artists produced images, then master carvers carved them in wood, and master printers performed their magic with ink brush and handmade paper. Edo period artists cranked out prints to fulfill a huge demand for images. Artists like Hiroshige and Hokusai fulfilled this need by creating amazing series of prints with titles like "100 views of Edo" or "36 views of Mt Fuji." Why such a high demand for Mt Fuji, you ask? Mt Fuji was (and is) sacred to the Japanese. Pilgrimages to the top of Mt Fuji are an important part of the Neo-Confucian pattern of life, both during the Edo Period and now. The pilgrimage is so important that small versions of Mt Fuji were built for those who could not make the actual pilgrimage. These stand-in Mt Fuji’s have a great name, “Fujizuka,” and there are over one hundred of these Fujizuka scattered across modern-day Tokyo, most of them made during the Edo Period.

Since a majority of the visual arts during the Edo period were printed, they were both affordable and highly portable. They started to find their way to Europe via Dutch merchants in the seventeenth century, but it was not until the nineteenth century that they would end up having a deep impact on artists in the West. Following the opening of trade with Japan in 1858, artists in France and England like Mary Cassatt and James McNeill Whistler combined western printmaking traditions in the Intaglio print process with an Edo period compositional flair. They adopted a flattening of space, strong diagonal lines, and an abstract use of color.  Van Gogh believed Japan was a Mecca for artists, and Monet considered the Japanese masters to be at the top of the artistic hierarchy. We call this influence Japonisme.

Edo period craftsmanship carried over into the next movement of art in Japan, called the Meiji, which lasted until Emperor Meiji died in 1912. Following the opening up of Japan to cultural, political, and technological ideas from other cultures, Japan was at this time transforming from a largely feudal society to a modern, industrial one. The art from the Meiji period reflects this cross-pollination between Western and Eastern cultures. Gone are the dynamic, otherworldly views of Mount Fuji and Edo as Japanese painters began incorporating Western styles of painting into their work. This Western influence persisted even amidst the conservative desire for traditional Japanese nihonga paintings. Meanwhile craftsmen, no longer churning out armor and swords for the samurai class, began making decorative objects for pure enjoyment, while typically Chinese subject matter, such as dragons and other animals, became popular across media.

This reader is part of a larger series of introductory texts about art and art history. Each has been written under the direction of Rick Love.

The Edo Period was the height of Japanese art!

I have always been fascinated with Japan's beauty. Everything about the country is beautiful for me!