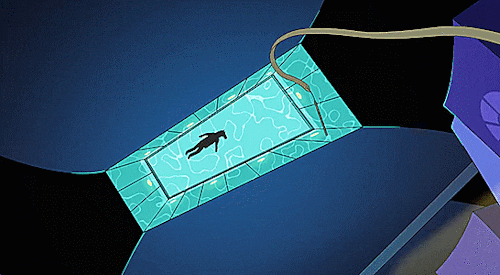 In the final season of BoJack Horseman, paying attention to the art in the background provides a momentary distraction from the heart-wrenching redemption arc of season six.

When BoJack helps Jameson escape from rehab and accompanies her to a party, a Frida Kahlo self-portrait decorates the back wall. The animators seem to amuse themselves with visual puns, so I suppose you could describe this painting as a portrait of Frida Koala(o?).  If you look closely, you can even see the detail of a tiny hand-shaped earring. 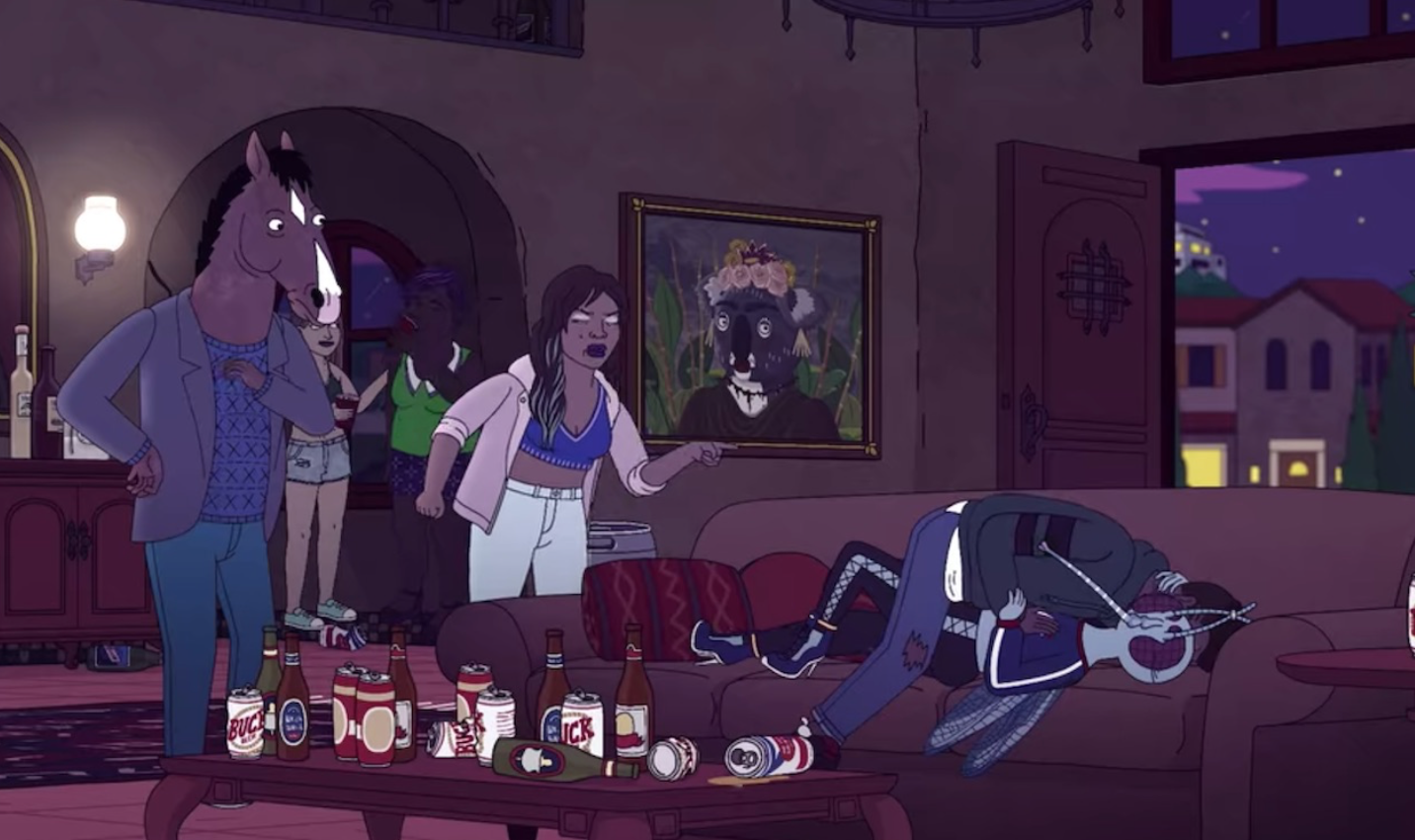 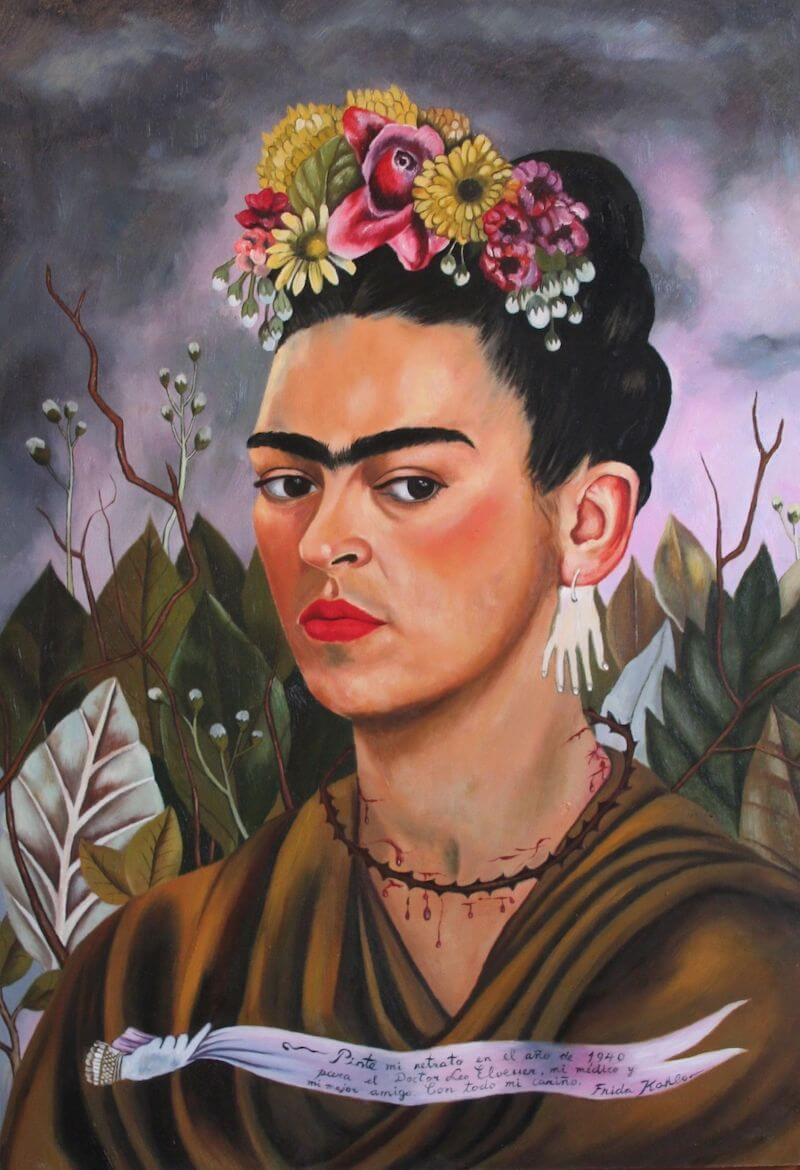 We already know that the animators of BoJack Horseman love art history almost as much as we do here at Sartle, so it’s no surprise that they took us on a visit to the Art Institute of Chicago this season. Although, the fact that Diane took Guy gave me a bit of anxiety as a former museum worker.  A bull in a museum?  I’m not sure I would’ve allowed it.  I can’t let any art get stampeded on my watch.  In front, we see the statue called Lion, created by Edward Kemeys, which currently resides by the entrance, protecting the museum quite like a sphinx.  The animators typically add anthropomorphic animals to the artwork they include, but since Kemeys’s Lion was already an animal, they swapped the lion body for a crouching female nude taking the pose of Auguste Rodin's The Thinker, making it an art history reference two-fer. 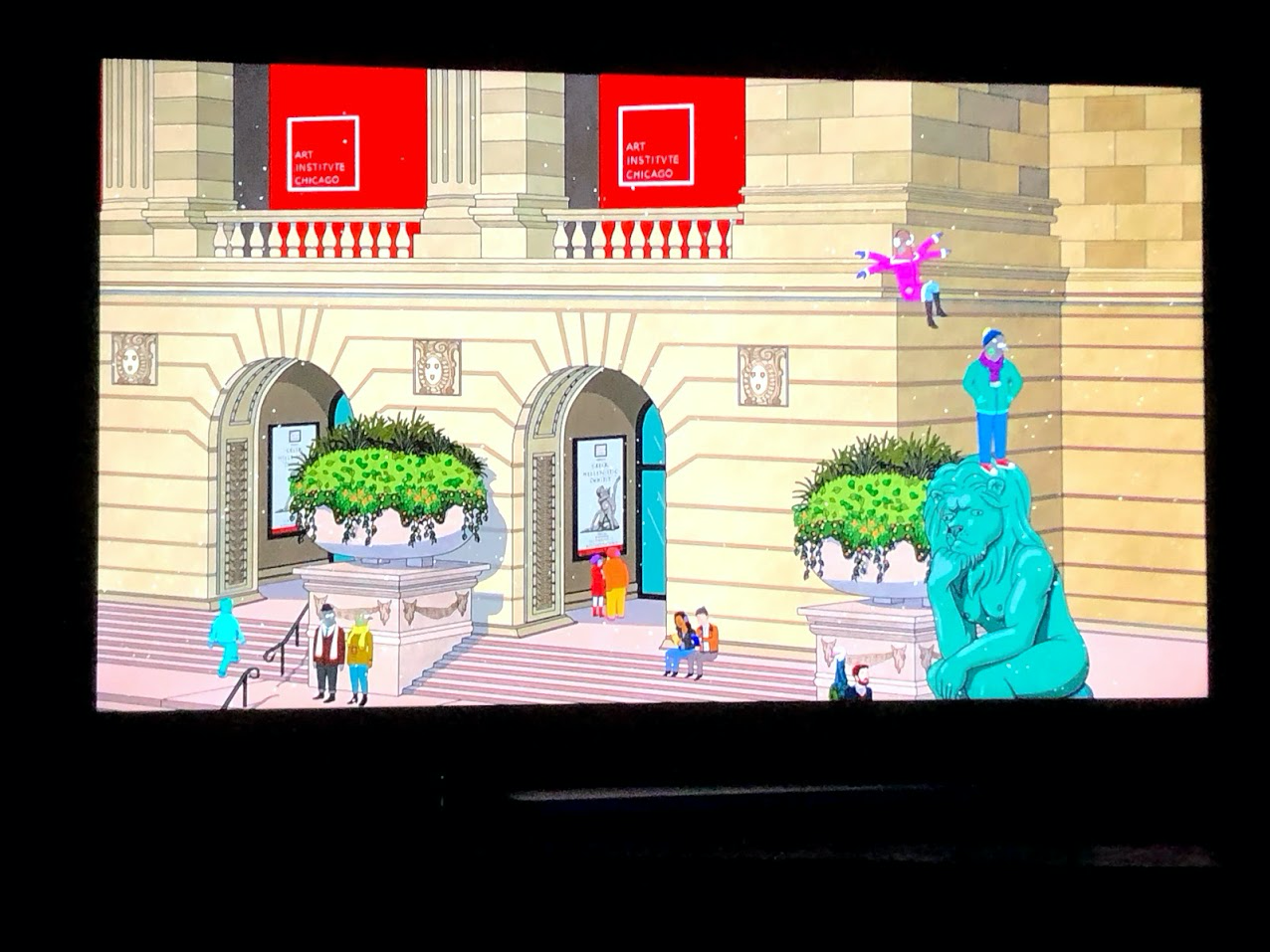 The central work shown inside the museum is Georges Seurat’s A Sunday Afternoon on the Island of La Grande Jatte. On the right, we have what at first glance I assumed to be either a work by Robert or Sonia Delaunay (because they really liked painting circles), but after a bit of research I discovered it’s more likely a nod to an untitled work by Tanaka Atsuko. To the left of the Seurat, we have a reference to Georges (why are so many impressionists named Georges?) Lemmen’s portrait of his sister. 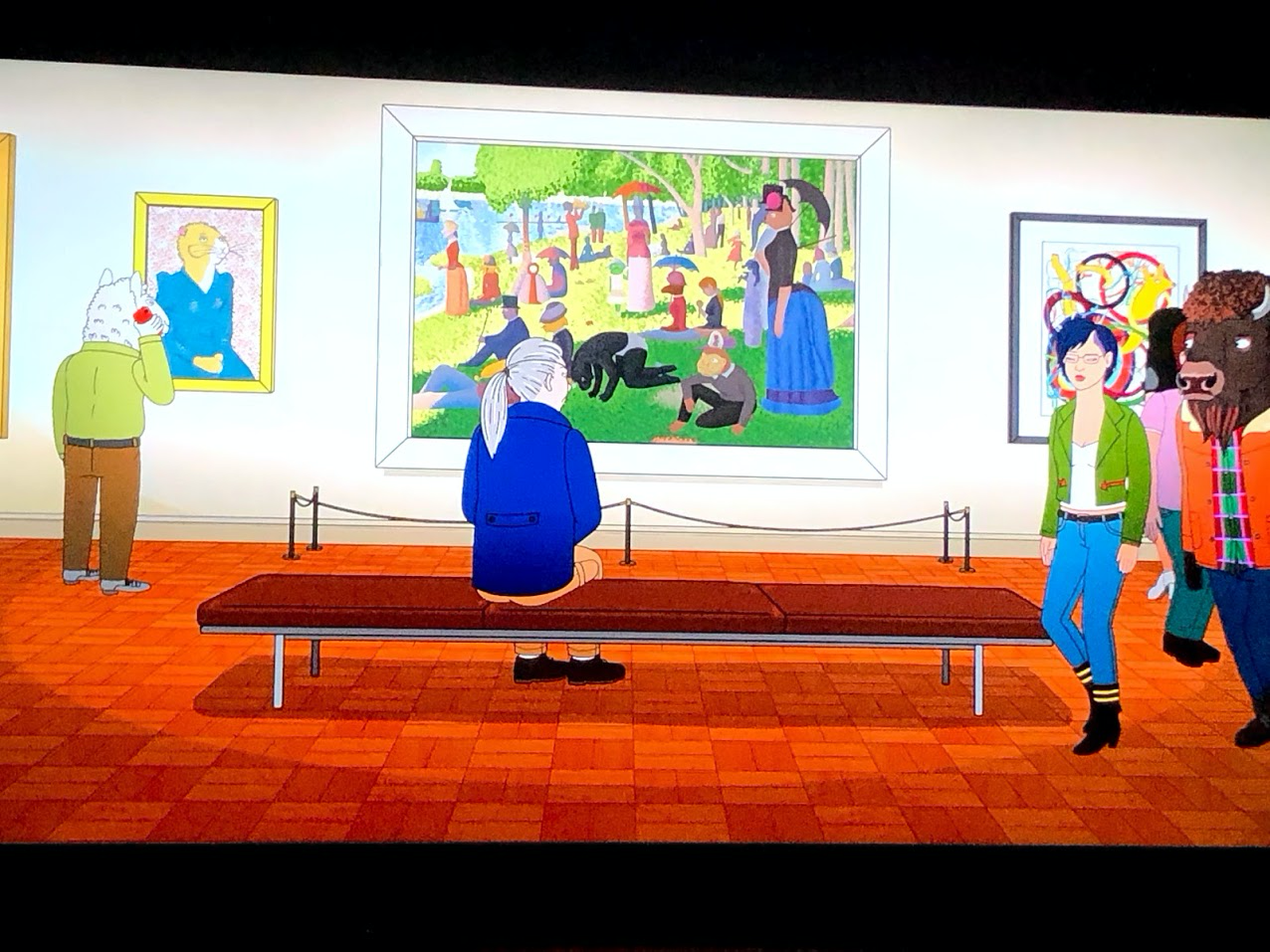 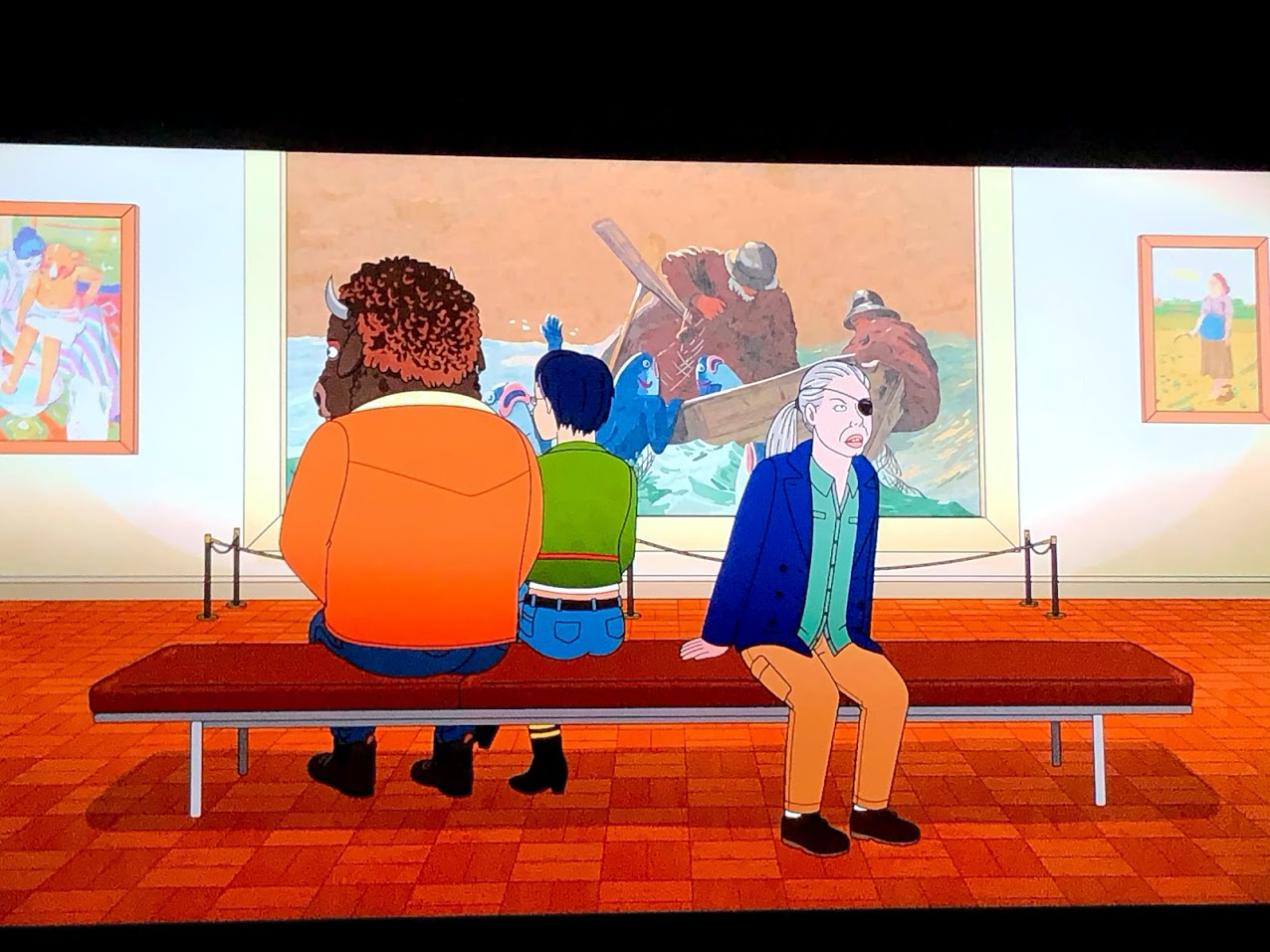 On Guy and Diane’s side of the bench, we have The Child’s Bath by Mary Cassatt (left), The Herring Net by Winslow Homer (center), and The Song of the Lark by Jules Breton (right). Their meeting with Isabel at the Art Institute of Chicago was to gather intel on the Whitewhale corporation.  While Whitewhale may be fictional, the conglomerate reflects companies like Disney or Amazon. Perhaps their discussion of this topic within the context of the museum suggests the influence of such conglomerates over the world of art.  Many museums benefit greatly from donors who made lots of money working for major corporations like those, which has been a topic of contention amongst art historians, critics, and curators. 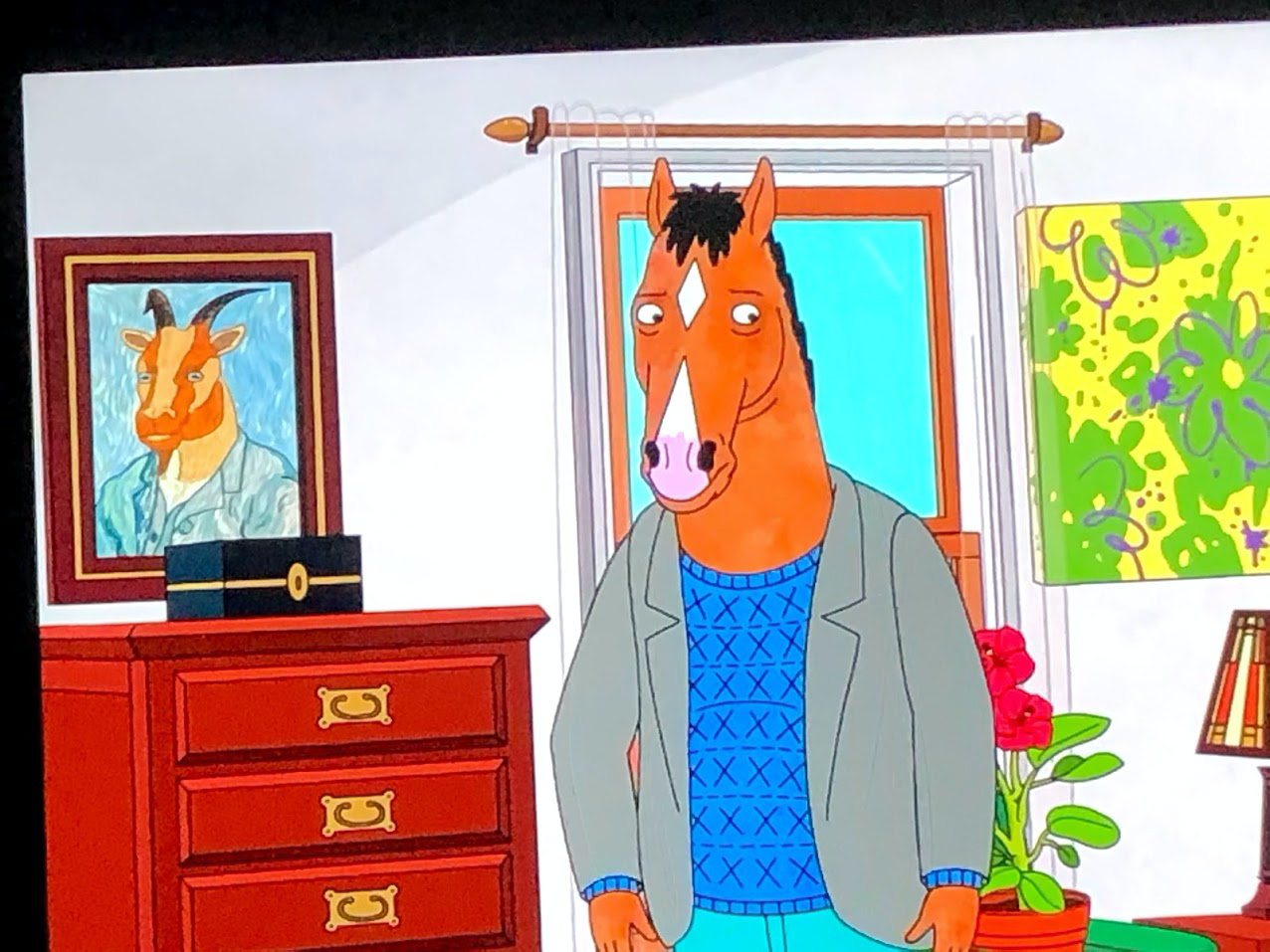 In BoJack​​​​​​​'s “special big room” at Pastiches Rehabilitation Center, a self-portrait of Vincent van Gogh (Vincent van Goat) suggests the similarities between BoJack​​​​​​​'s haunted past and deteriorating mental state, and van Gogh’s notorious mental illness and his time spent at the asylum in Arles, where he painted some of his most famous works. 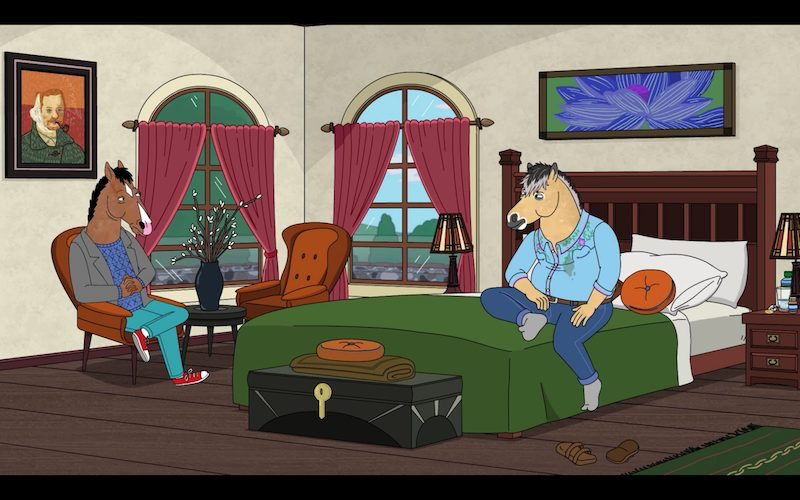 At Partridges, another rehab in Malibu, another van Gogh self-portrait hangs, this time it’s Self-Portrait with a Bandaged Ear.  Van Gogh painted this one during his time at the asylum as was a way for him to cope with his mental illness.  Unfortunately for BoJack​​​​​​​, his artistic talent is much better suited for the camera than the canvas. 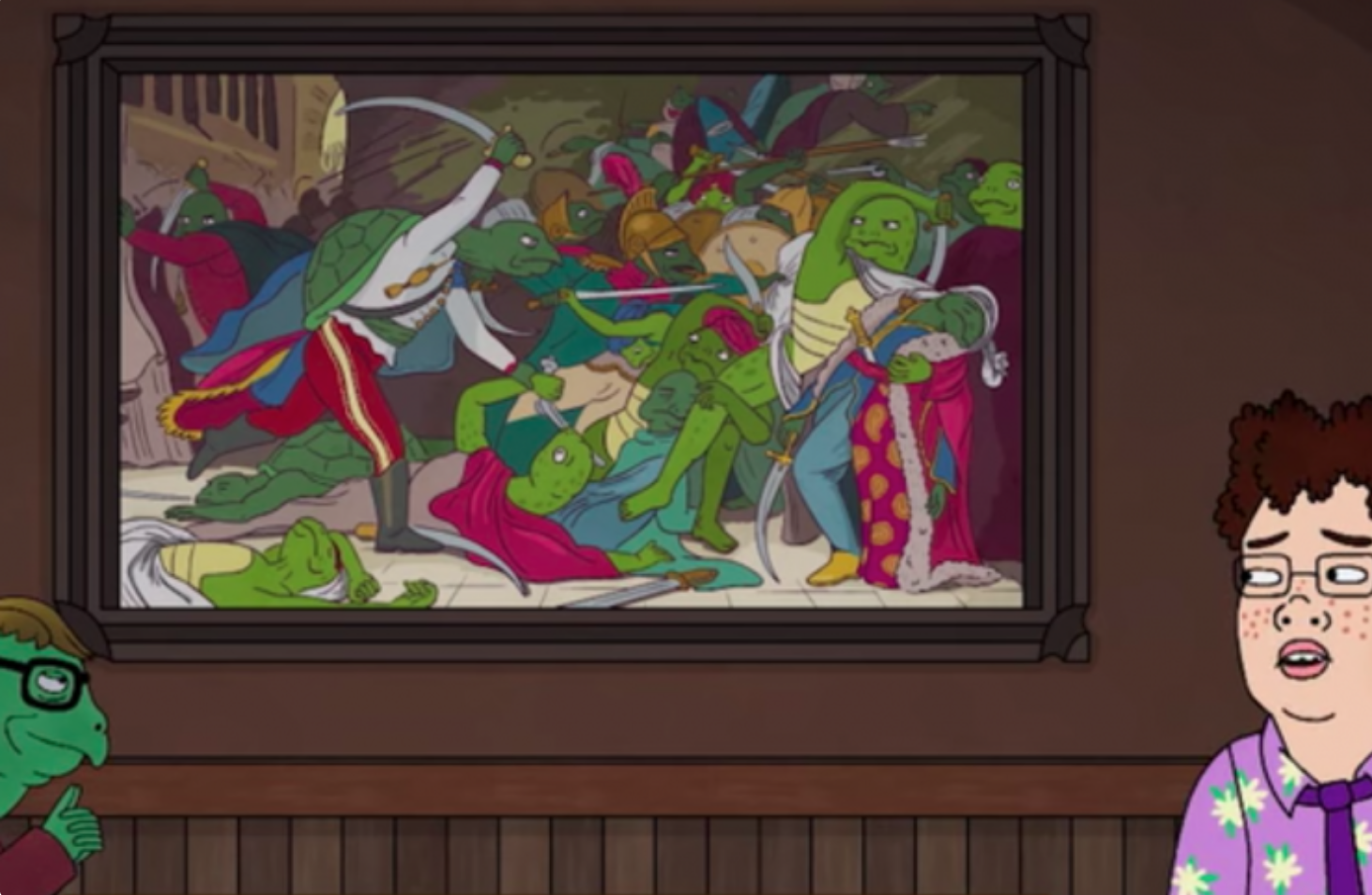 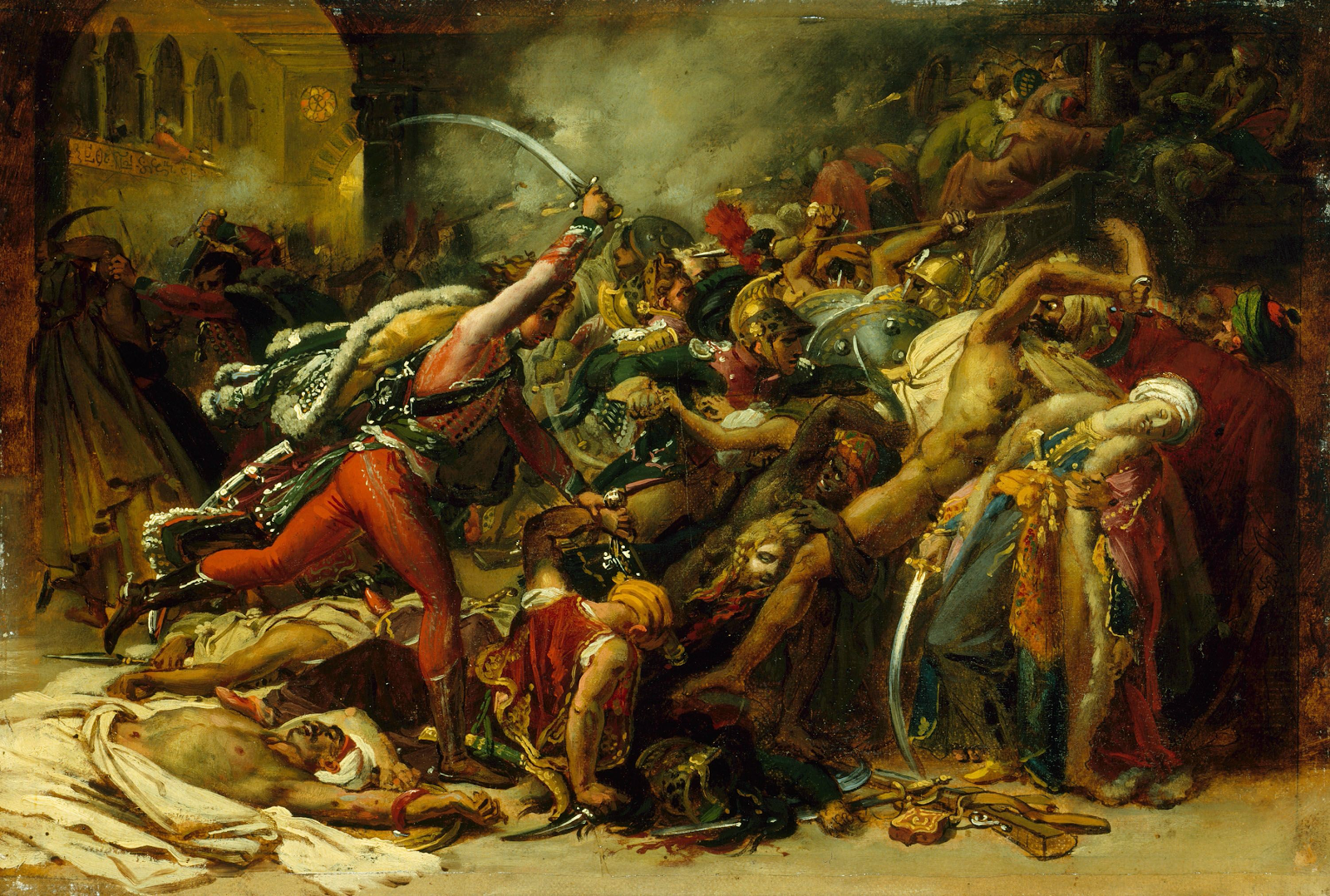 In Lenny Turtletaub’s conference room, the painting on the back wall is The Revolt of Cairo by Anne-Louis Girodet de Roussy-Trioson, which was commissioned by Napoleon. Perhaps this reference to the Napoleonic era reflects Turtletaub and Princess Carolyn’s handling of the industry-wide assistant strike.  The painting depicts Napoleon’s army suppressing an uprising in Egypt, much like the agents’ suppression of their mobs of assistants, who are demanding to not be treated like crap.  Doesn’t seem like too much to ask for but -- wait, where’s my coffee?  MAUREEN IF YOU DON’T BRING ME MY VENTI TRIPLE SHOT BLONDE ICED LATTE IN 5 MINUTES I SWEAR I’LL COOK YOU BIT BY BIT IN MY DUTCH OVEN! 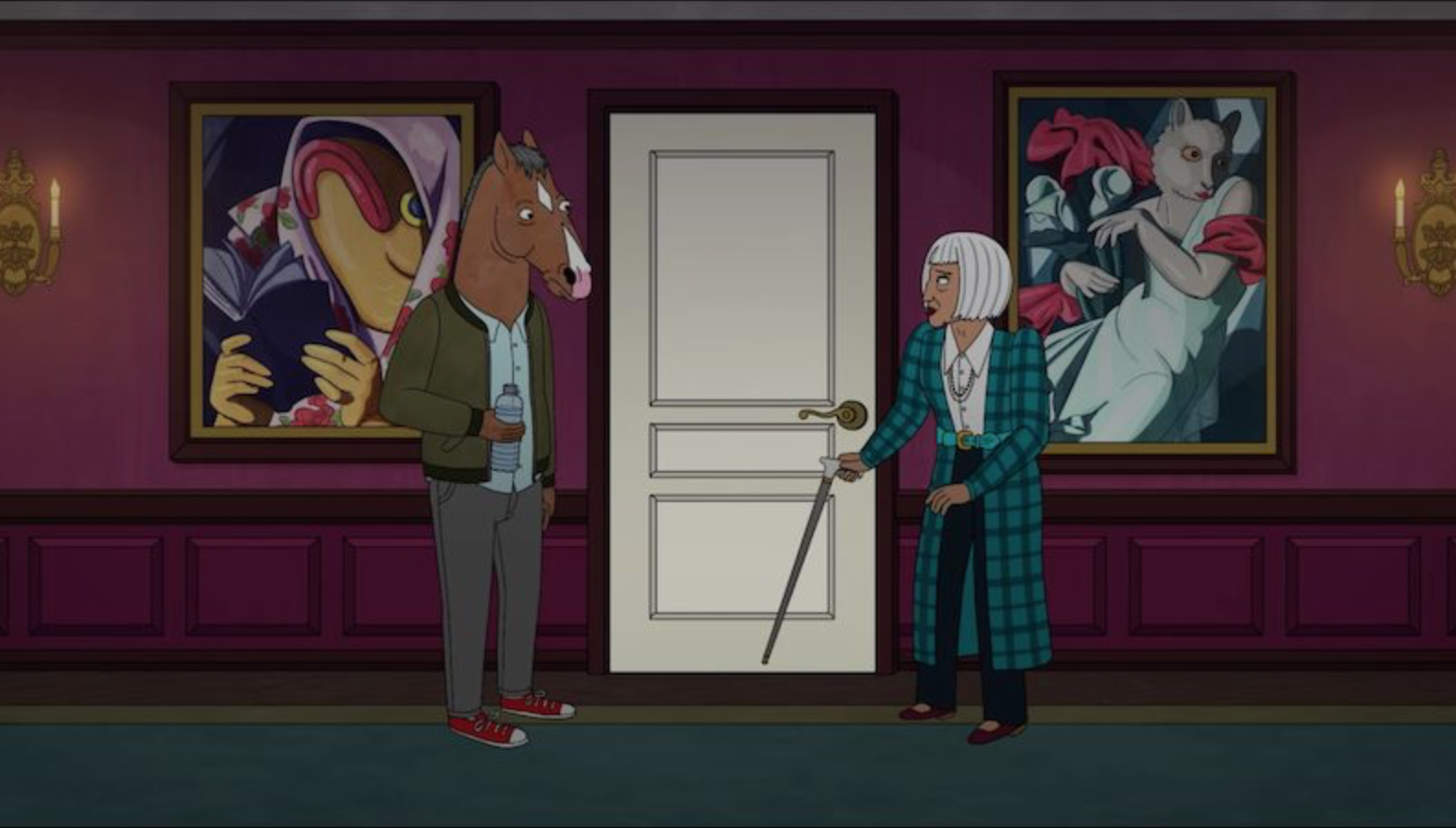 When BoJack visits Angela Diaz, the culprit for his downward spiral, we get a glimpse into the art in her dark, depressing mansion.  Here we have variations on two paintings by Tamara de Lempicka: Portrait of Madame Ira Perrot (right) and The Polish Girl (left). Lempicka gained fame due to her portraits of aristocrats, or in this case, aristocats. 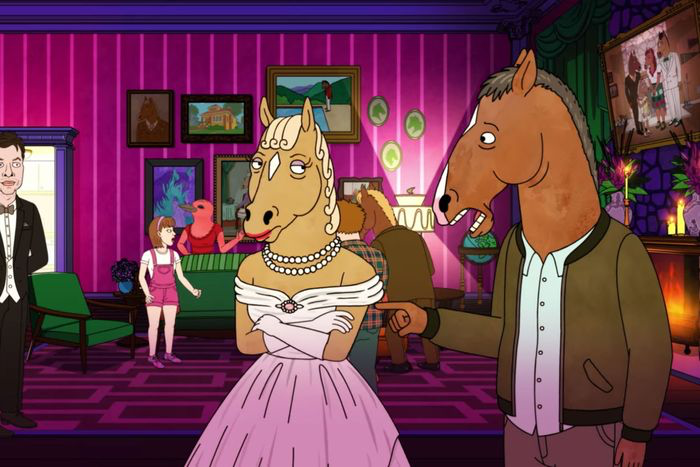 In the heartbreaking dinner party episode “The View from Halfway Down,” many of BoJack’s paintings make an appearance in the living space [is it still called a living space when all the people in it are dead? (DON’T GET MAD I GAVE YOU A SPOILER ALERT!)].  At the top, there’s everyone’s favorite: the David Hockney swimming pool painting. 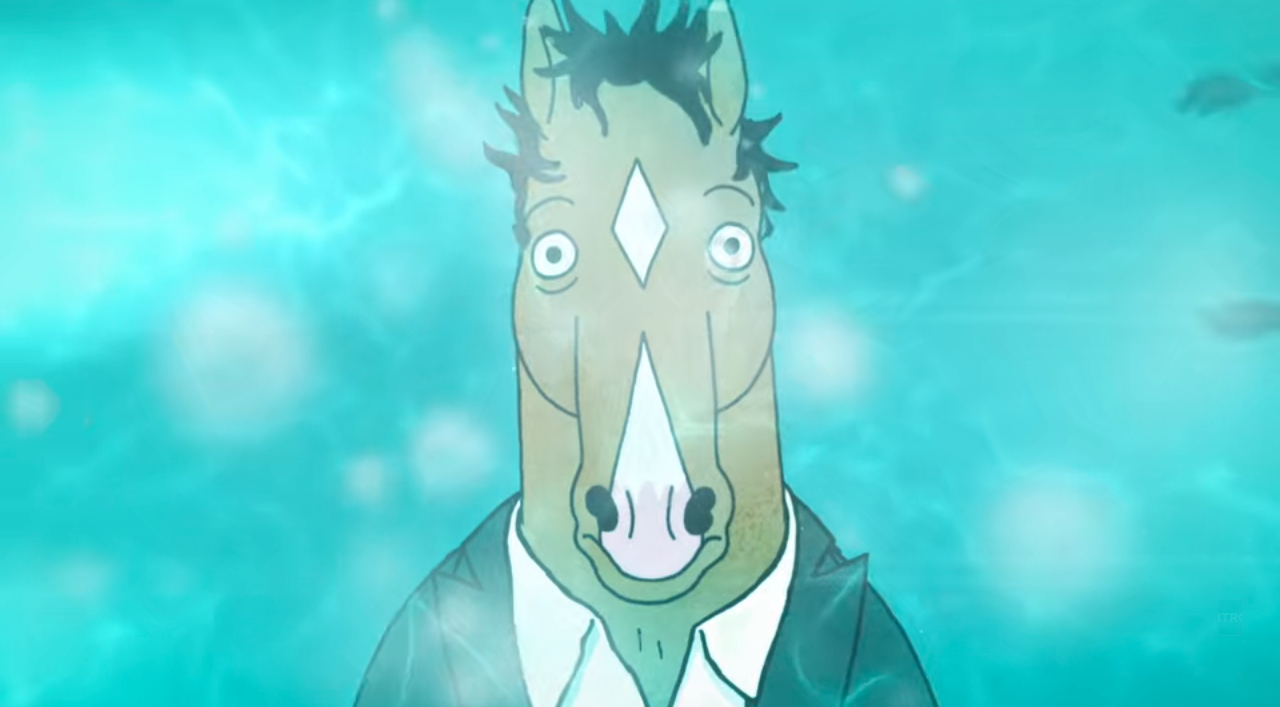 In the last episode, Todd and BoJack have an astute (and very Todd-ish) conversation about the meaning of art, inspired by the Hokey Pokey.

BoJack: “Is that the point of art?”

And that’s a wrap on BoJack Horseman.  The highs, the lows, the laughs, the tears, the Princess Carolyn tongue-twisters, the Todd antics, all done-zo.  I want to give a major shoutout to the animators, who included art history references throughout the series specifically for us to write about.  Thanks, that was really thoughtful of you guys.