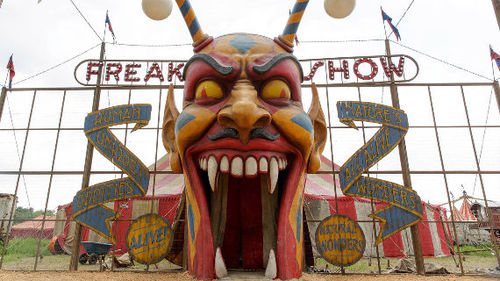 Another season of American Horror Story has begun and we here at Sartle are ready to get our freak on. To avoid madness while we wait for the second part of this year’s twisted (Twisty?) Halloween special we’ve devoted ourselves to matching our favorite characters with their fine art counterparts. So step right up if you dare and gaze upon our cabinet of creepy and curated curiosities! 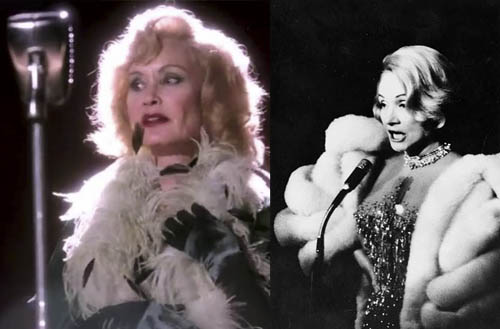 Jessica Lange (left) channels Marlene Dietrich (right) as Elsa Mars. Like Dietrich, Elsa was supposedly a cabaret star who went to Hollywood. Despite comments by Ryan Murphy that she’s more closely based on Bette Davis, in a recent episode Elsa says of Marlene, “That bitch stole my career.”

You’ve read about her! You’ve heard about her! Now you can see her in the flesh! She crawled out of the glitter and grime of prewar Berlin to a big top near you. She does everything Marlene did, and without the help of those million dollar gams. The biggest thing on no legs since the Model T … Miss Elsa Mars!!! 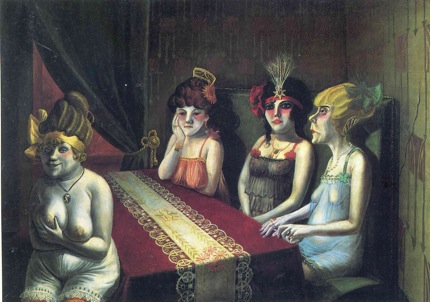 The Salon 1 by Otto Dix at the Kunstmuseum Stuttgart

In her cabaret days, Elsa might have moved in circles like this one. These ladies were at the low rent end of the cabaret circuit. Underneath the glossy patina of a Liza Minnelli musical, the Cabaret meant prostitution for those who didn’t have the looks or talent to make it in the big time.

Come one! Come all! See the hairiest thing since King Kong! Let Ethel Darling the Bearded Woman wow you with her whiskers! 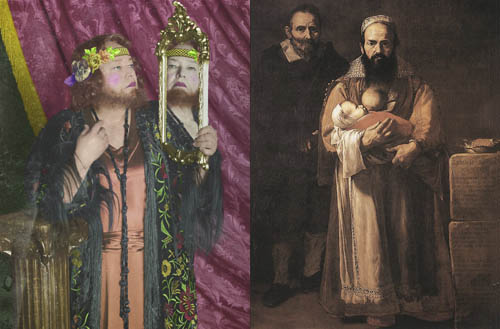 If you think your mother’s menopause was bad, try living with real-life Bearded Lady Magdalena Ventura. In seventeenth-century Spain, Magdalena went through a sudden late-life hormone shift that left her with an epic, lumberjack beard almost overnight. Bet you’ll think twice before you complain about momma’s hot flashes.

She’s got something for everyone and then some! Try not to desire the rare, the beautiful, the exotic three-breasted hermaphrodite Desiree Dupree! Take her up to lover’s lane and you may get more than you bargained for! 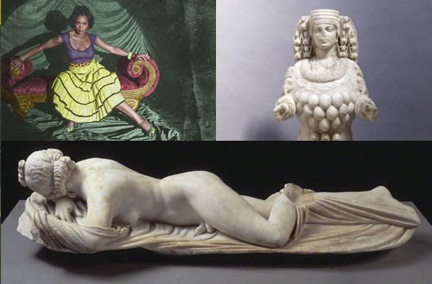 Angela Bassett as Desiree Dupree (top left), Ephesian Artemis at the Museum Of Ephesus (top right), and The Sleeping Hermaproditos by Gian Lorenzo Bernini at the Museé du Louvre (bottom)

Women like Desiree have a long history of modeling in marble. From ancient Turkey where multi-breasted figures honor the fertility goddess and huntress Artemis, to Greece where Ovid explains the mythical creation of the first Hermaphrodite, women with that certain je ne sais quois (between the legs or on the chest) have fascinated sculptors.

This next attraction’s a steal! Two for the price of one. Double singing, double sweetness, double trouble! The red-hot matricidal minxes you have to see to believe: The Tattler Sisters! 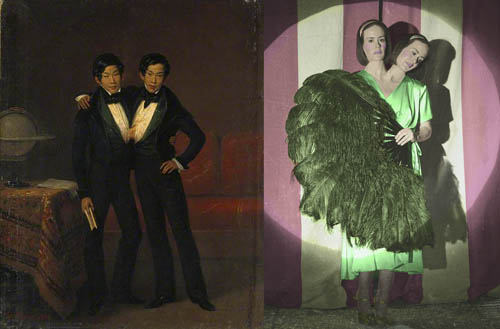 If two heads are better than one, imagine what two of everything can do. Nineteenth-century Siamese twins Chang and Eng must have had active imaginations to marry two sisters, with whom they shared a bed built for four. Between them, they had 21 children, so they must have gotten busy. American Horror story references their conjoined liver, which is in fact preserved in Philadelphia’s Mutter Museum.

Que sera, sera, whatever you’ll be, you’ll be. Will you be pretty? Will you be rich? Don’t ask your mother, ask Esmerelda! With just one look in her crystal ball she can tell you who will win the next big race, when a dark stranger will enter your life and bring you love, and even the day of your death! Watch out though, she’s got some crackpot idea Ronald Reagan will become president! 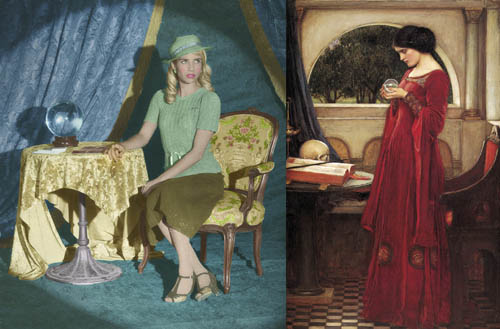 Artist John William Waterhouse set the standard of beauty for generations of LARPers and Game of Thrones fanatics, but we’d need more than a crystal ball to tell us the identities of his elusive mystery models.

You may need to step closer for our next attraction, but watch your step! This pint-sized princess will get under your feet as easily as she gets into your heart! She may have the looks and name of a doll but Ma Petite is 24 inches of pure woman! 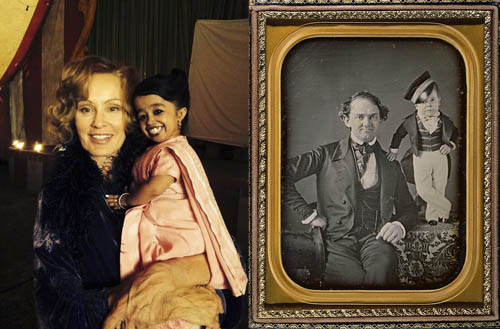 General Thom Thumb was bigger than The Beatles in his time, though he stood only 25 inches tall when he debuted. Pictured here with close friend and ringmaster, P.T. Barnum, General Tom was also America’s biggest little player. He loved the ladies, and allegedly kissed over a million girls before marrying little-person beauty icon Lavinia Warren in a lavish circus wedding to which Barnum sold tickets.

I’m on pins and needles with excitement (or maybe just pins) to introduce our next attraction, Pepper the Pinhead! 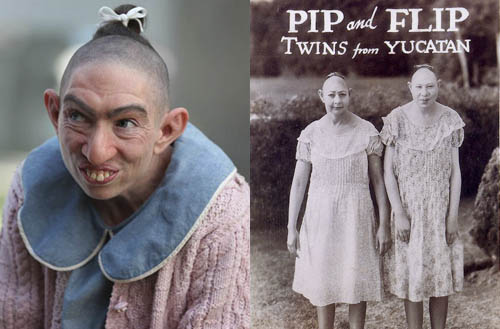 Often billed as the “Twins from the Yucatan” these two sisters were neither twins nor Aztec descendants. The girls were years apart in age and actually two Georgia peaches ripe for the picking by their exploitive parents who rented them out to circuses and Hollywood. The girls were forever immortalized in Tod Browning’s1932 cult classic Freaks. 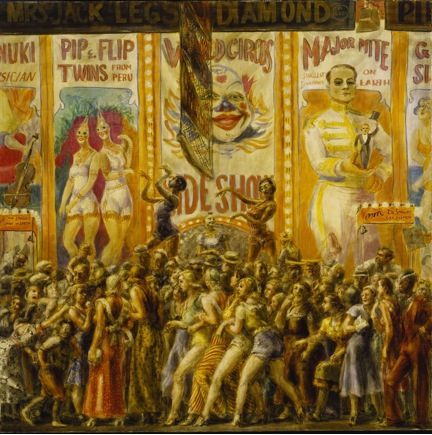 In this painting by voyeuristic artist Reginald Marsh, we’re left to question who the real freaks are. The writhing crowd outside of this Coney Island sideshow is grotesque as it gawks at our friends Pip and Flip and the Tom Thumbesque performer Clarence Chesterfield Howerton (a.k.a. Major Mite).

Stronger than Samson and equally thin up top, our bald barker Dell Toledo proves strength isn’t in a man’s hair. Delilah never tied this strongman to a chair but he is definitely bound to his triple-threat lady Ms. Desiree Dupree. 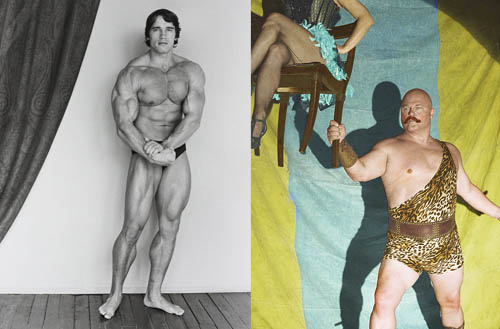 The Strongman of Sacramento is pictured here in the height of his bodybuilding career. This portrait was taken before Arnold brought the carnivalesque to California with his reign as the governator. Too bad he couldn’t use those muscles to give the state budget a lift.

If you have a weak stomach turn away now. Twisty isn’t clownin’ around. Our butchering buffoon with the killer smile will have your heads rolling with laughter. 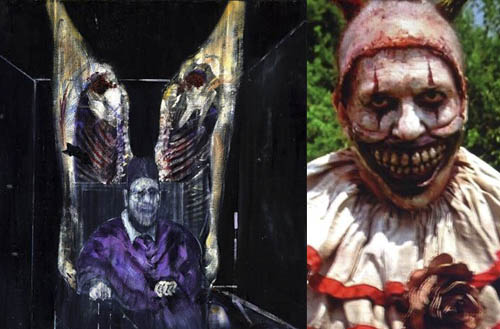 Though Francis Bacon’s Figure With Meat doesn’t depict a clown, it’s the only thing twisted enough to do American Horror Story’s Twisty justice. With a whitened face and sinister grin reminiscent of the new poster-boy for coulrophobia, Bacon’s priest with hanging carcasses touches the same primal fear. The clown is commonly associated with joy and children’s laughter. The priest is traditionally God’s representative on earth, the ultimate symbol of paternal comfort. In these interpretations, both figures are transformed into something ghoulish. We bet you’ll think twice about going to confession, or ordering a side of beef.

By: Sarah Oesterling and Griff Stecyk