More about Saturn Devouring His Son

There is nothing quite like waking up in the morning after a long and peaceful night of sleep to this pleasant portrait of Saturn Devouring His Son.

Ok, so pleasant isn’t quite the right word, but this was reality for the legendary Spanish artist Francisco Goya.

Saturn Devouring His Son is based on the Greek myth of the titan Saturn who, according to prophecy, was going to be overthrown by one of his sons. So Saturn did what any parent in his position would do and ate his kids, one by one. How’s that for poor parenting? But Saturn’s wife, who was a little pissed at her husband, hid the last one and he did end up overthrowing Saturn, because that’s just how prophecies go. But, like seriously, did he have to actually eat them? Was just killing them not enough?

Painted on the walls of Goya’s home, this portrait was never meant for human consumption, but was part of 14 “Black Paintings” created between 1819 and 1823. Ironically, this painting lived in Goya’s dining room, which doesn’t exactly make a good case for Goya’s sanity. Many critics speculate why he created such a disturbing image and came up with:

1. That it is representative of the political state of Spain at the time
2. That it is somehow related to his own complicated relationship with his son (yikes)
3. That he was pissed at the aging process.

Either way, Goya had to be really down in the dumps to create such an upsetting piece.

The absolute creepiest part about this painting is that (reader discretion is advised) Saturn’s genitals are not depicted, and critics have speculated that Saturn may have had an erection while eating his kids. Either this part of the party deteriorated as a result poor upkeep or it was too much for viewers to handle and was removed in the process of transferring it from the wall to canvas, in which case...many thanks to the restoration crew. 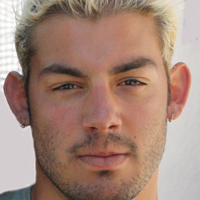 Francisco Goya never intended this gruesome painting of Saturn to be seen by the public, and it’s easy to see why.

Saturn chowing down on his child’s arm probably wouldn’t have gone over well with the folks over at the royal palace. There’s another painting of the same scene by Peter Paul Rubens. His Saturn Devouring His Son is disturbingly realistic, wheras Goya’s hungry Dad looks way more goofy and cartoonish.

In the myth (and the title) Saturn eats his son, but many think that in Goya’s version the child is female due to the narrow shoulders and rotund rear-end. Apparently those fond of infanticide through cannibalism aren't hung up on gender.

Though Saturn is mid-bite, his attention is elsewhere. In fact, he appears to be watching something just outside the painting. Hey, nothing like dinner and a show…

Here is what Wikipedia says about Saturn Devouring His Son

Saturn Devouring His Son is the name given to a painting by Spanish artist Francisco Goya. According to the traditional interpretation, it depicts the Greek myth of the Titan Cronus (in the title Romanized to Saturn), who, fearing that he would be overthrown by one of his children, ate each one upon their birth. The work is one of the 14 Black Paintings that Goya painted directly onto the walls of his house sometime between 1819 and 1823. It was transferred to canvas after Goya's death and has since been held in the Museo del Prado in Madrid.

Check out the full Wikipedia article about Saturn Devouring His Son

Saturn Devouring His Son is mentioned on our blog - 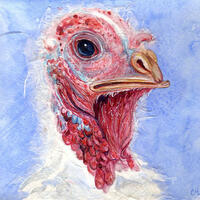 Life of a Thanksgiving Turkey According to Art History
Happy Thanksgiving to those who celebrate! By the way, did you know your turkey is an immigrant?…
Sign up
Forgot Password
Reset Password