More about Girl With Red Balloon 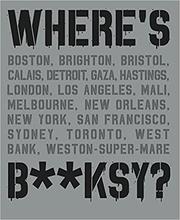 Justin Beiber gets a tattoo of Girl with Red Balloon and the world suddenly doesn't care.

There are two other Girl With Red Balloon pieces located throughout London that haven't yet been destroyed. Look for them at the stairwell of the South Bank and Blackfriars bridge.

This particular girl is/was 15 years old and lived on the side of a printing shop on Great Eastern Street. She had been compeletely boarded up for most of that time though because of a billboard and at another time due to damage from peeling paint.

Even though Banksy's authentication board, Pest Control, disowns all work that has been removed from its original site, the work has still been valued at £300,000.

The Sincura Group doing the highly questionable removal also removed another one of Banksy's works: "Slave Labour", which ended up in Miami and sold for  $500,000.

Sincura Group says they are collecting Banksy works for an exhibition titled STEALING BANKSY? due to open in April 2014. They say they want to shed light on whether or not Banksy works can actually be considered stolen since they are technically still graffiti, and to question the morality of selling the artwork, since they are orginally illegal and nobody technically owns them. Basically, the Sincura Group are trying to justify the monetization of their stolen artwork.

In March 2014, annoying pop star Justin Beiber got a tattoo of the "Girl with Red Balloon", bringing his street cred from zero to a bigger zero.

I used the shredded girl with red balloon for my Halloween costume last year! It was such a hit, people loooooved it

Girl With Red Balloon is mentioned on our blog -

Trick or Treat Yo’ Self with These Art History Inspired Jack-o-Lanterns
Bow down, witches, ‘cus the Sartle team has carved the best jack-o-lanterns EVER. Now I’m biased,… 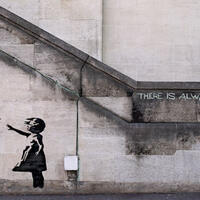 Think Before You Ink: Girl With Red Balloon
Oh Banksy… I am not your biggest fan. Look, I don’t know what graffiti is like throughout the… 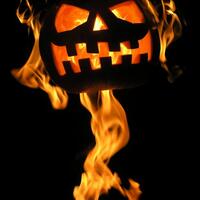 Pumpkins Invade Art History -- the horror!
Pumpkins are everywhere this season. On our doorsteps, in our coffee, in every single item of food…
Sign up
Forgot Password
Reset Password