Monet painted this same scene twelve times, which pales in comparison to his twenty-five paintings of haystacks.

This work's collector, Martin A. Ryerson, tried to buy Monet’s water-lily mural to no avail; Monet decided to keep this treasure at home and, instead, gave it to the French government

By 1870, 11 million passengers traveled through the Gare Saint-Lazare each year.

More about Arrival of the Normandy Train, Gare Saint-Lazare 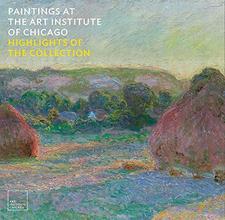 Paintings at the Art Institute of Chicago by James Rondeau

Today’s Americans might think that train travel is more idyllic than utilitarian, but for Claude Monet, trains signaled the arrival of a new, modern age.

It makes sense that the Impressionists, painfully modern in nearly every aspect of their lives, would have loved a good train ride. They were flaneurs wandering about town and pondering the meaning of life, pleasure-seekers enjoying the new concept of nightlife, and travelers adventuring by train. Monet especially loved this invention of modern travel, as well as all the machinery and architecture that surrounded it. The Gare Saint-Lazare, in all its glass and iron glory, featured modern building materials and linked two of Monet’s favorite cities, Paris and Normandy, where he developed his now-infamous painting style.

The steam locomotive, an industrial form of travel made possible by new technology and materials like steel and coal, quickly became an emblem of modernism. Just a few years before Monet set up shop to obsessively paint this train station, he experienced J.M.W. Turner’s impressive Rain, Steam, and Speed at the National Gallery in London. Coincidentally, one of Monet’s other renditions of this train station now resides alongside his inspiration in the National Gallery’s collection. This was Monet’s first foray into painting the same scene multiple times, a practice he would develop over the next few decades with series of subjects like the Rouen Cathedral and haystacks.

A painting of this caliber could only get to the Art Institute of Chicago through equally high-caliber means. This stunning Monet comes from the collection of Martin A. Ryerson, one of the museum’s founding trustees and most significant donors. Like most rich people, Ryerson came from money. Ryerson’s father made his fortune in the early fur trapping and lumber businesses in Michigan in the first half of the nineteenth century. He then took his family to Chicago, where he made even more money in the booming real estate business.

Ryerson’s fabulous circumstances allowed him to gallivant around the world collecting art in accordance with the Art Institute of Chicago’s mission – to create an encyclopedic collection that represented all periods and styles. His hefty bank account also allowed him to scout out and collect artworks at home, too. Ryerson acquired this painting after Impressionism rocked American sensibilities after its debut at Chicago’s 1893 World’s Columbian Exposition. It’s pretty safe to say that Ryerson had a much better time than the poor murder victims of H. H. Holmes’s famed Murder Castle, which also debuted at this fair. Here, Ryerson got his hands on a work by John Singer Sargent and saw Winslow Homer’s The Herring Net, which he later purchased in 1915. Ryerson donated a bulk of his collection to the Art Institute after his death in 1933, and his acclaimed artworks helped put the museum on the map.

Here is what Wikipedia says about Arrival of the Normandy Train, Gare Saint-Lazare

Arrival of the Normandy Train, Gare Saint-Lazare, also known as The Railway Station of Saint Lazare in Paris, is a c. 1877 painting by Claude Monet. It is in the permanent collection of the Art Institute of Chicago.

The Impressionist painting depicts a steam train from Normandy arriving at the Gare Saint-Lazare railway station in Paris, with crowds of people waiting amid the steam and smoke under the vaulted iron and glass vault of the station's train shed. It was painted en plein air, at the station. It measures 60.3 cm × 80.2 cm (23.7 in × 31.6 in) and is signed and dated in the lower left corner, "Claude Monet 77".

The painting is one of 12 works by Monet depicting a scene at the station, and it was also one of eight that he exhibited at the Third Impressionist Exhibition in Paris in April 1877. It was sold to Ernest Hoschedé in March 1877, but was in the possession of Georges de Bellio the following year. On his death in 1894, it was inherited by de Bellio's daughter Victorine and her husband Ernest Donop de Monchy. Sold to the Bernheim-Jeune gallery around 1899, it passed through the hands of the art dealer Paul Rosenberg and then the Durand-Ruel gallery in Paris in 1911, which took the painting to New York. It was sold later in 1911 to the wealthy industrialist and art collector Martin A. Ryerson for US$7,000. On his death in 1932, it was bequeathed to the Art Institute of Chicago.

Check out the full Wikipedia article about Arrival of the Normandy Train, Gare Saint-Lazare

Is this article about Arrival of the Normandy Train, Martin Ryerson's origins and life, a social commentary on elite society obtaining art, murder victims, the Art Institute of Chicago? Pick one central idea and stick to it. The first paragraphs of the article discuss the role of trains in modern society, then goes into Ryerson. There was barely any information on Monet's piece. Also, the way you describe Ryerson is very crude. "Like most rich people, Ryerson came from money." Cringe. "Hefty bank account" and "Fabulous circumstances" indicating that no work was done to achieve them are likewise cringworthy. After going off in yet another direction with the Murder Castle victims, you end it with how the Art Institute of Chicago got on the map. What does any of that have to do with Monet's work? There is no point to this article at all.