Skip to main content
Artworks
At the Moulin Rouge

More about At the Moulin Rouge

It's no secret that Henri de Toulouse-Lautrec was inspired by the spirited Parisian nightlife in Montmartre. The guy loved to party.

He painted what he knew so most of his paintings are dancehall scenes. This painting features Lautrec himself, his friends (a photographer and a winemaker), a cousin, and his favorite Moulin Rouge entertainers, all having a ball.

If you ever get the chance to see the painting in person, you can see a fold on the right side of the canvas where a portion of the painting was removed. I guess some genius advised Lautrec that it would be more appealing to potential buyers without the weird green woman glaring in the corner.

That guy was wrong. The panel was later reattached, and thankfully so. The startling neon face is the most exotic and exciting part of the picture. Who wants to stare at the backs of Lautrec and his buddies as they huddle around a table, drinking and talking and making everyone else feel unwelcome? Without this dancer's creepily lit face we are complete strangers, unwelcome intruders in a Parisian nightclub packed with locals. And you know how the French are about tourists.

As a footnote, the dancer in the painting is thought to be May Milton. May was English and she danced in Paris for only one winter, after which she pretty much vanished. She was supposedly not very pretty and also not a good dancer so perhaps no one minded. Lautrec nonetheless included her in this painting, and also in a poster that became very popular. So popular that even big daddy Pablo Picasso had a copy of May hanging in his studio.

Here is what Wikipedia says about At the Moulin Rouge

The painting portrays near its center a group of three men and two women sitting around a table situated on the floor of the cabaret. From right to left, the people at the table include: writer Édouard Dujardin, dancer La Macarona, photographer Paul Secau, photographer Maurice Guibert, and, facing away, Jane Avril, being the focal point of the group - recognizable by her flaming red-orange hair. In the right foreground, apparently sitting at a different table, is a partial facial view of English dancer May Milton, with painted red lips, her face aglow in a distinctive greenish light and shadow. In the background standing on the right fixing her hair is Moulin Rouge dancer La Goulue and another woman. The center-left background shows the short-statured Toulouse-Lautrec himself, standing in front of and next to, Dr. Gabriel Tapié de Céleyran.

At the Moulin Rouge is part of the Helen Birch Bartlett Memorial Collection at the Art Institute of Chicago, where it was first displayed on December 23, 1930. It was exhibited in London in 2011 at the Courtauld Institute of Art. Art critic Jonathan Jones calls the painting a masterpiece, and writes "the scene is somehow more exotic and more exciting than any recreation [of the Moulin Rouge, or Montmartre] in popular culture."

Check out the full Wikipedia article about At the Moulin Rouge

How much do you know about Henri de Toulouse-Lautrec? Take our quiz!

I love this painting of "At the Moulin Rouge" because of how detailed the background is! Being able to see the reflection of the rest of the restaurant is so cool to me and to be able to pull that off in a painting is impressive.

At the Moulin Rouge is mentioned on our blog - 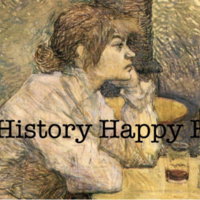 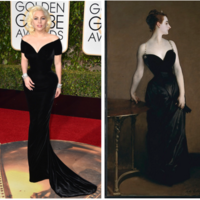 Gaga at the Golden Globes: Behind the Scenes Art History Style
We admit, we miss us some Lady Gaga, which is why we were so excited to see her make an appearance…