Abigail Adams was 56 when Gilbert Stuart started this portrait in 1800, already old by the standards of her time, but she still retained some of her youthful beauty.

Stuart commented that had he painted her in her prime, he “should have had a perfect Venus.”  He wanted to paint her with her still-lustrous hair exposed, but she insisted on wearing the matronly cap.

By the time Stuart completed the painting 15 years later, Abigail had aged beyond recognition, and she said the painting looked “no more like [her] than any other person.” Their son, future president John Quincy Adams, wasn’t happy about the wait.  He wrote of the double portraits of his parents, “I never think of this subject without feeling against Stuart an indignation, which I wish I could change into contempt. If there was another portrait painter in America, I could forgive him.”

True to Stuart’s romantic praise of Abigail as an aged “Venus,” she had been “bright and luminous” as a girl, with dark hair and eyes, and a slim figure. When John first met her when she was 15, he was unimpressed, calling her witty but “not fond, not frank, not candid.”  When he met her again as a willowy beauty of 17, he fell head over heels. Abigail wrote of their physical differences, “My good man is so very fat...and I am lean as a rail,” but they had intellect in common. John wrote that Abigail had a “clearer and fuller Intelligence, than I can get from a whole Committee of Gentlemen.”

If historians paid as much tribute to our founding mothers as our founding fathers, Abigail Adams would be our George Washington in petticoats. She was her husband’s most trusted adviser, influencing policy and helping to shape American democracy over 100 years before women could even vote. She wrote to John at the Continental Congress of 1776 to “remember the ladies...if particular care and attention is not paid to the ladies, we are determined to foment a rebellion, and will not hold ourselves bound by any laws in which we have no voice or representation.” 240 years later, she’s still waiting for Mike Pence to get the message.

John’s career meant many separations during the course of their relationship, but their numerous letters record one of history’s greatest love stories. Abigail was fiercely faithful through it all, though that didn’t stop her from engaging in a light flirtation with John’s best frenemy, Thomas Jefferson. Jefferson was much better looking than John and closer to Abigail’s age (John was nearly a decade older). She called Jefferson “one of the choicest ones of the Earth,” but deep down her heart belonged to her “good man” John.

Abigail shows up a lot in pop culture. Laura Linney’s Golden-Globe-winning performance in the HBO miniseries John Adams set the gold standard in Abigail Adams portrayals. However, our personal favorite Abigail reference at Sartle is her place at the table in Judy Chicago’s epic feminist installation piece, The Dinner Party.

I love Gilbert Stuart. I love his art because he influences history in his artwork. 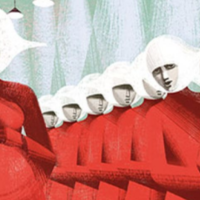