The City Canvas: A Paint the Void Retrospective at Pier 70 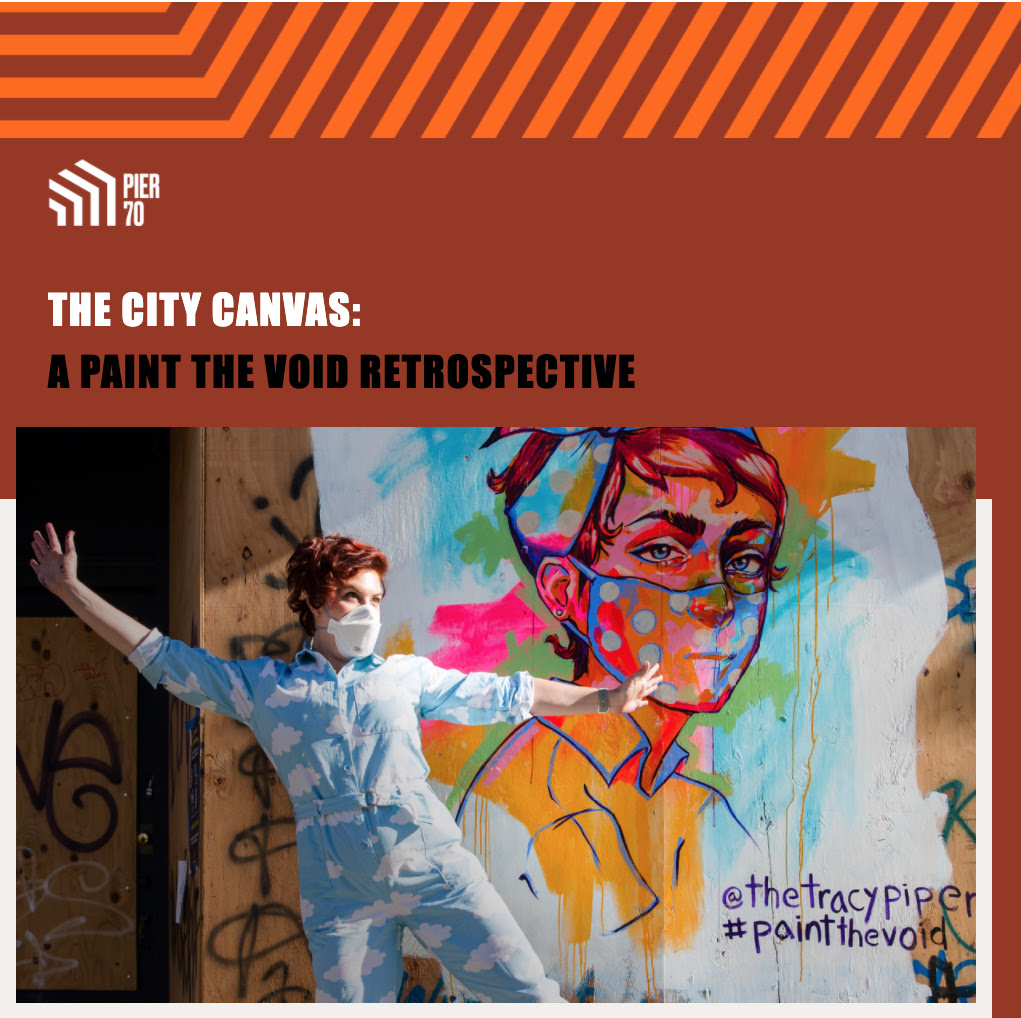 “Mural artists have been beacons shining light on what has happened around us and weaving it into the fabric of our daily lives on the street. Not for the first time, artists who are well-accustomed to facing unknowns in their creative process have been in the vanguard of emotional and social changes wrought by Covid.” - Exhibit signage

Almost as soon as the city shut down in the early days of the COVID-19 pandemic, street artists came out in droves, decorating the boarded-up storefronts with everything from simple graffiti tags to elaborate multi-media street art. It added color, interest, and hope to the city during what was a strange time for everyone. I, for one, can say that just seeing the community come out and work together in this way, even as we physically distanced, improved my mental health during this time. 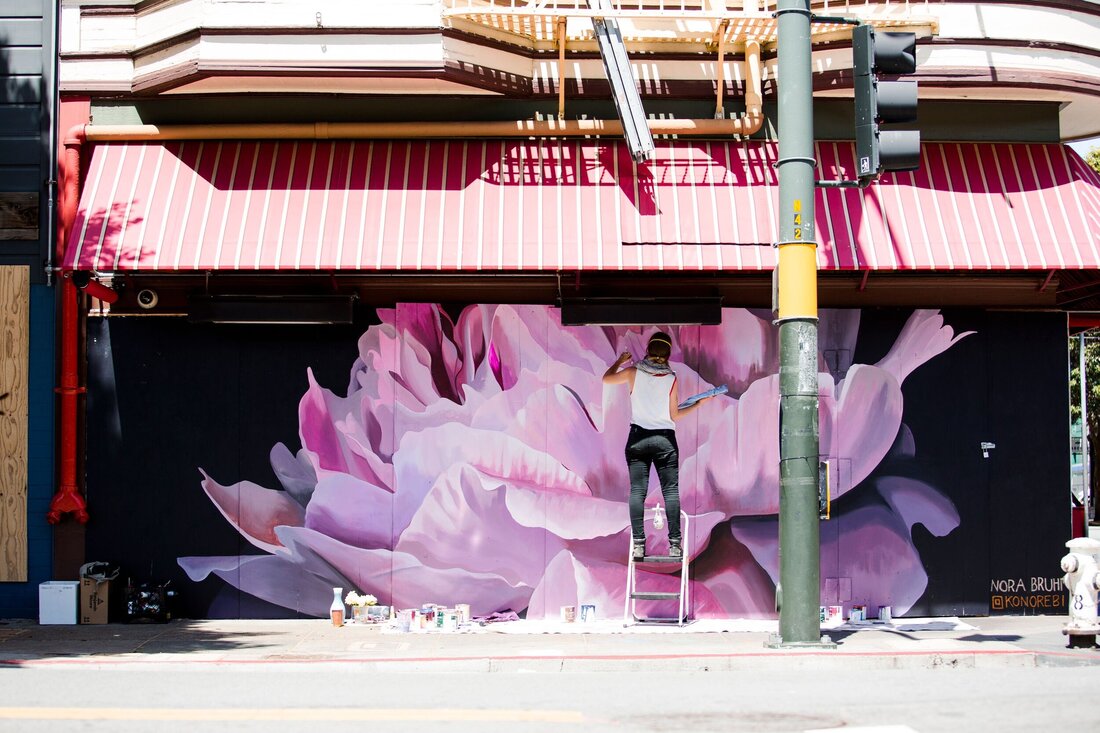 Shortly thereafter, Paint the Void launched. This is a non-profit organization that sprung up to raise funds for artist grants to create murals all around San Francisco, Berkeley, and Oakland. It’s astounding how fast it emerged, beginning work in April 2020, quickly after the pandemic had shut things down. It was “born from an idea to help keep artists engaged and paid as guardians of hope and beauty in a time of fear and uncertainty.” Many people left the Bay Area in 2020, but those who remained have had the chance to see more than 130 murals brighten up the city, funded by Paint the Void. San Francisco is forever changing, and the immediate creative response to the pandemic speaks to the spirit of the city. 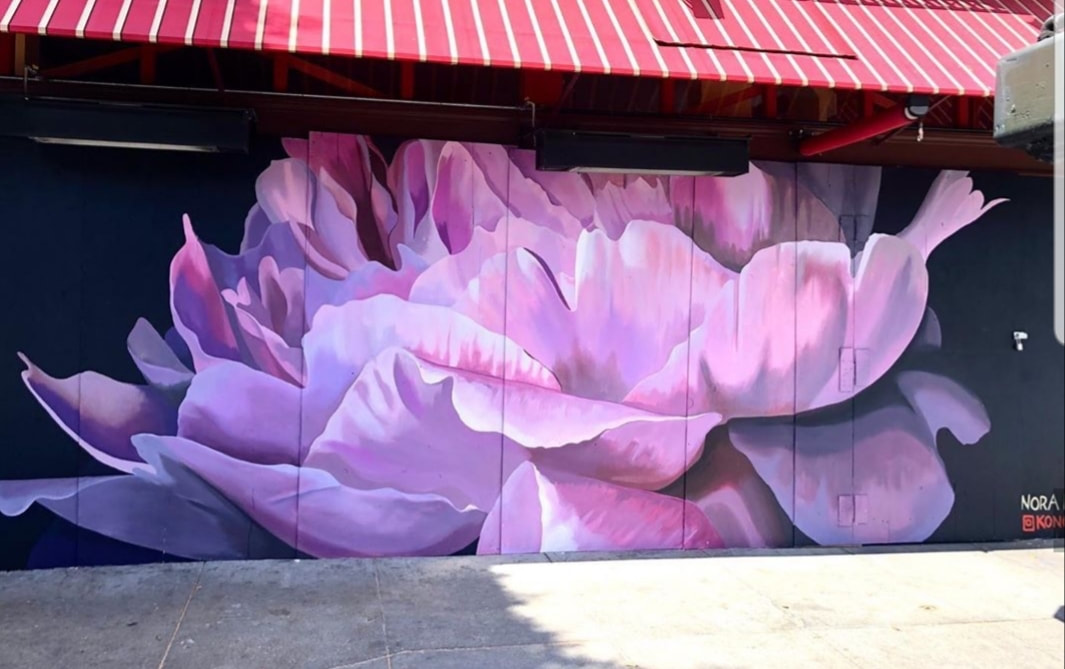 The project itself was dynamic. Isn’t it wild how much happened in the past two years, both locally and globally? The artists themselves responded to that in their work. Early work was either simply beautiful, or else spoke to the pandemic itself. 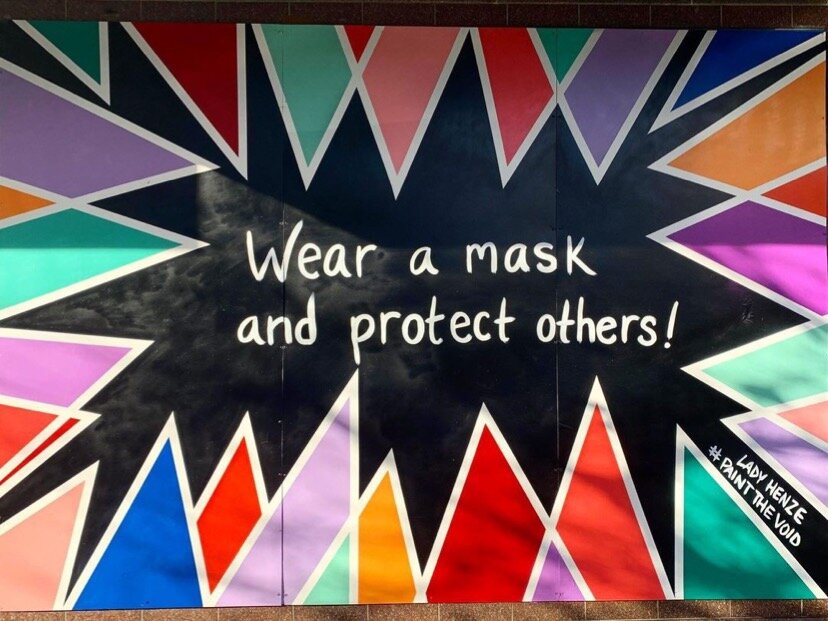 Quickly, though, national attention turned to the Black Lives Matter movement, and the art turned its attention with it. The murals of this time often spoke directly about social justice. 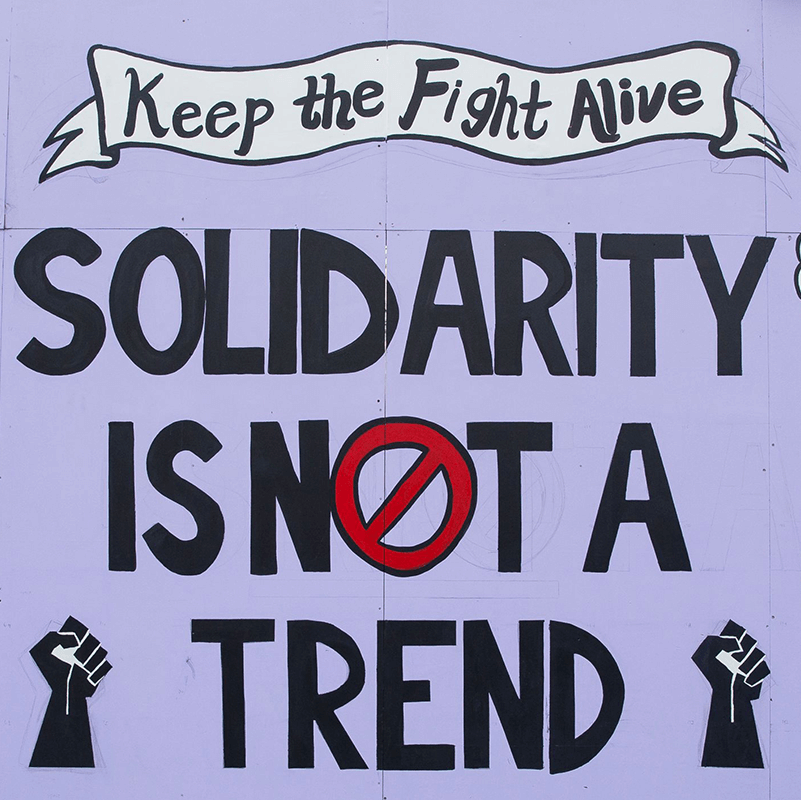 The exhibit is loosely set up to reflect the chronology of this change. The pieces at the front of the exhibit are about staying safe, letting love save us, and enjoying the bold colors of different art styles. This is where you’ll find work by Kate Tova, a pandemic breakout artist whose colorful, glittering art drew widespread attention and who recently graced the cover of San Francisco magazine in a dress she hand-painted in a similar style.

You’ll also find work by Mark Harris, Tracy Piper, Ursula Young, and Amilli Onair in this section. Almost all of the Paint the Void artists share their social media handles and hashtags on their work. As the work went up, people could pass by, take photos with the work, share it, and connect with both the artist and the community online. So many of us needed that sense of connection with other creative people as the months of the pandemic went on and we felt increasingly isolated from other humans. Here’s a list of all of the artists in the exhibit, in case you want to follow their work.

In this beginning section, we also see a display of photographs of Paint the Void pieces, some on display in the exhibit and others not. You might notice one photo that speaks to a local issue that played out during the pandemic: the battle between Ricky Rat and Fnnch. Fnnch’s honey bears sprung up all over the city during the early days of the pandemic, intended to bring people together, but drawing controversy for their ubiquitous sameness, softness of message, and slick marketing, not to mention the fact that the artist isn’t originally from the Bay Area. 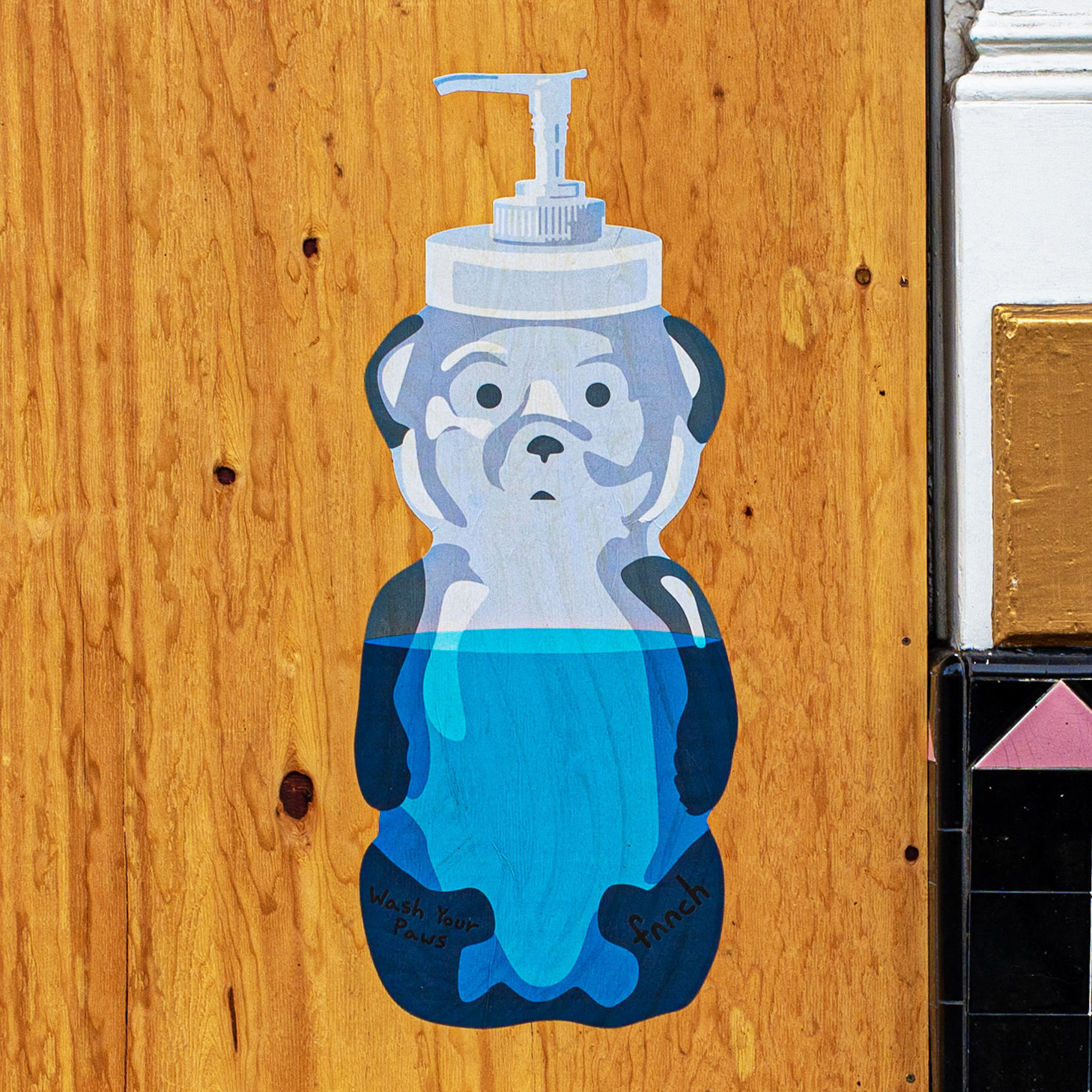 Local artist Ricky Rat was the most outspoken against Fnnch, and a rivalry emerged. We see a photo at Pier 70 of Ricky Rat covering up Fnnch’s work … both artists and named in the label of the work but notably only the former is a Paint the Void artist included on the signage for the exhibit. 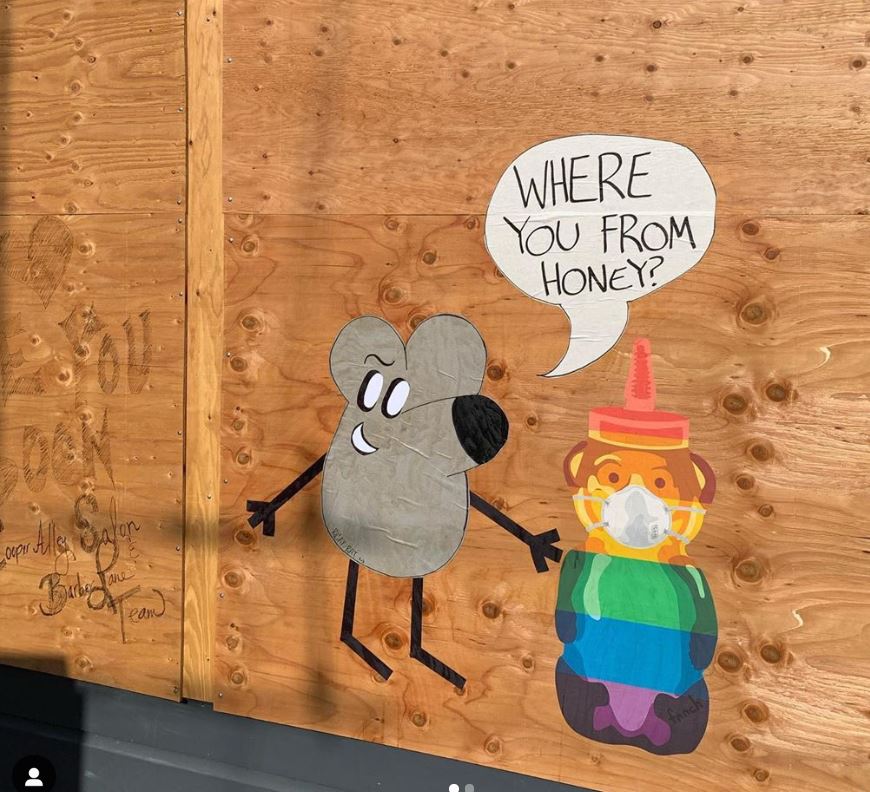 As the pandemic has dragged on, Paint The Void artists have continued to create in different ways to express the different social, emotional, and psychological experiences that we’re all going through here in San Francisco. At the end of 2020, the project received City of San Francisco funding for thirty additional murals “to creatively promote Covid safety protocols.”

And now we’re in a new era, yet again, and the Paint The Void project is displayed as the inaugural exhibit at Pier 70. There could not be a more perfect location for this art exhibit. How do you bring such powerful street art indoors without losing its magnitude? Most venues wouldn’t suffice. But the soaring open space inside of an industrial building in a very dynamic part of the city is the ideal backdrop for these works to continue to thrive. As you walk into the exhibit, you see the boards, removed from their storefronts and on full display, sharing their messages with you. The verticality of the space replicates the experience of passing by these storefronts in the urban environment, bringing them as close to their original display as possible. 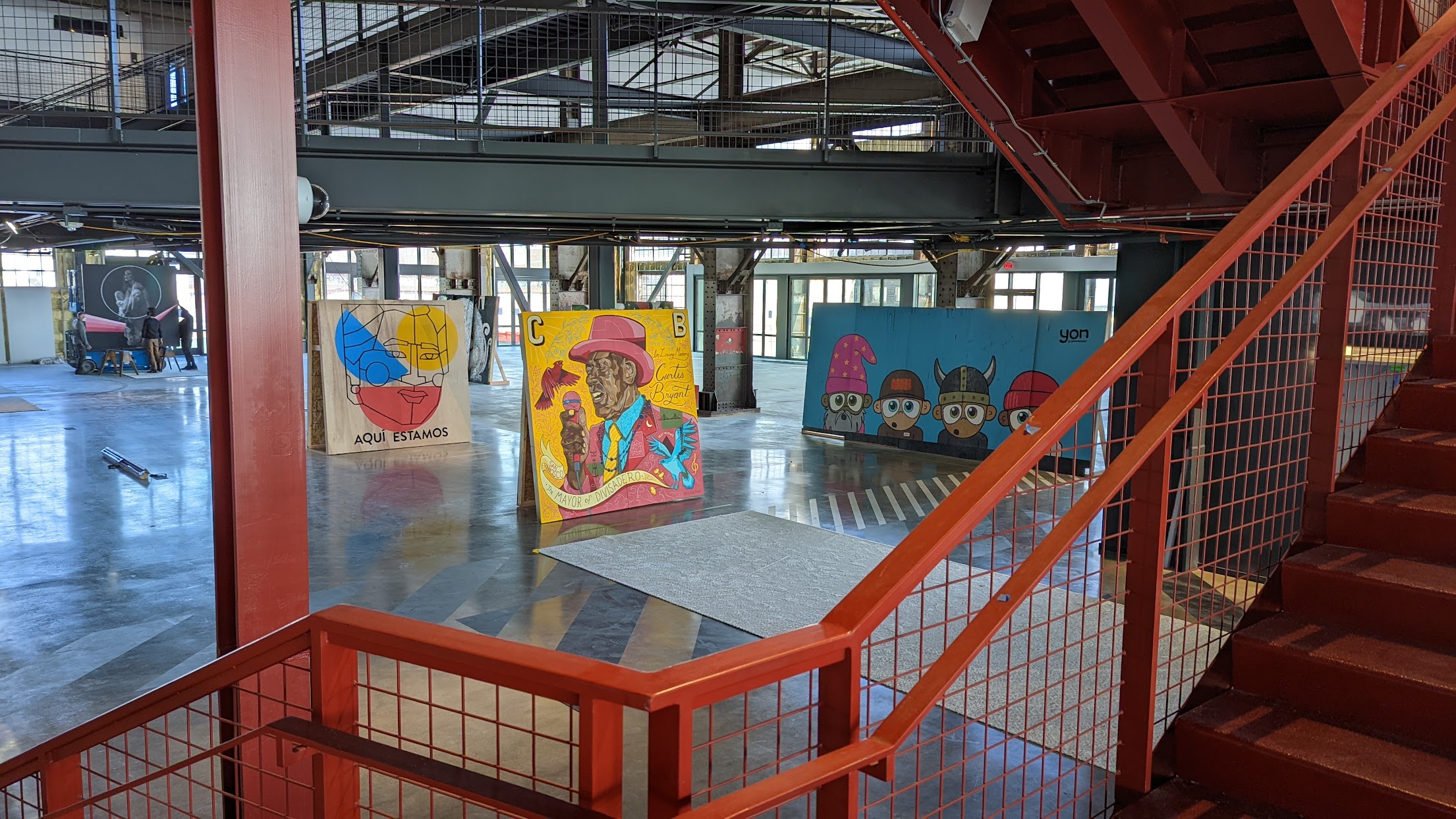 Pier 70 is itself in transition, reflecting back the transitions we’ve all gone through in the past two years. This industrial area of historic shipyards along the waterfront was closed to the public for over one hundred years, re-opening only recently in a massive project that brings housing (including BMR housing), non-profit arts space, parks, playgrounds, retail space, small business manufacturing and more to the area. It’s vibrant and in flux. Before or after seeing the exhibit, wander around the area. 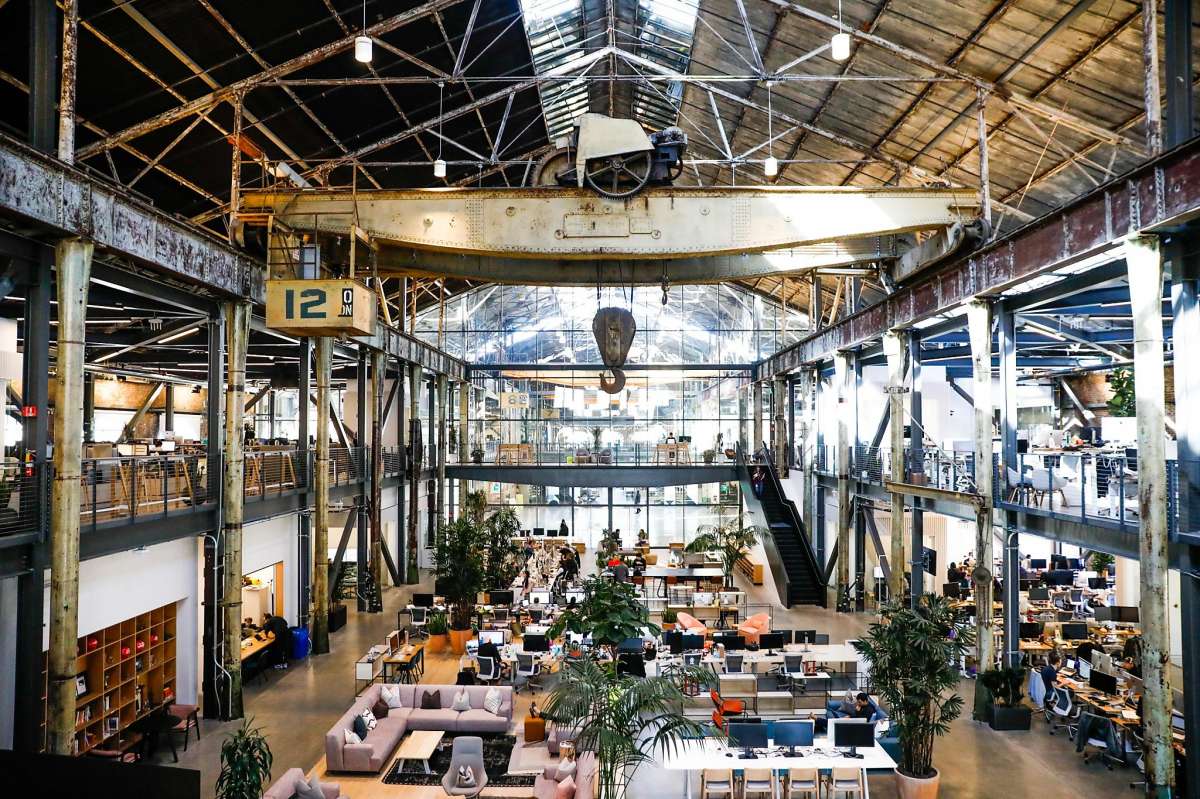 The exhibit is a quick one. It opened January 21st and is only open one additional weekend: January 27-30. There’s music, quick bites, and drinks to enjoy there.

Also be sure to check out the Love Letters to SF pop-up in the dining section of the exhibit. People from all over have written what they love about San Francisco and what keeps us shining on here. The letters were collected in public spaces all throughout the city, and it's funny, heartbreaking, heartwarming, and thought-provoking to read what SF citizens have written. 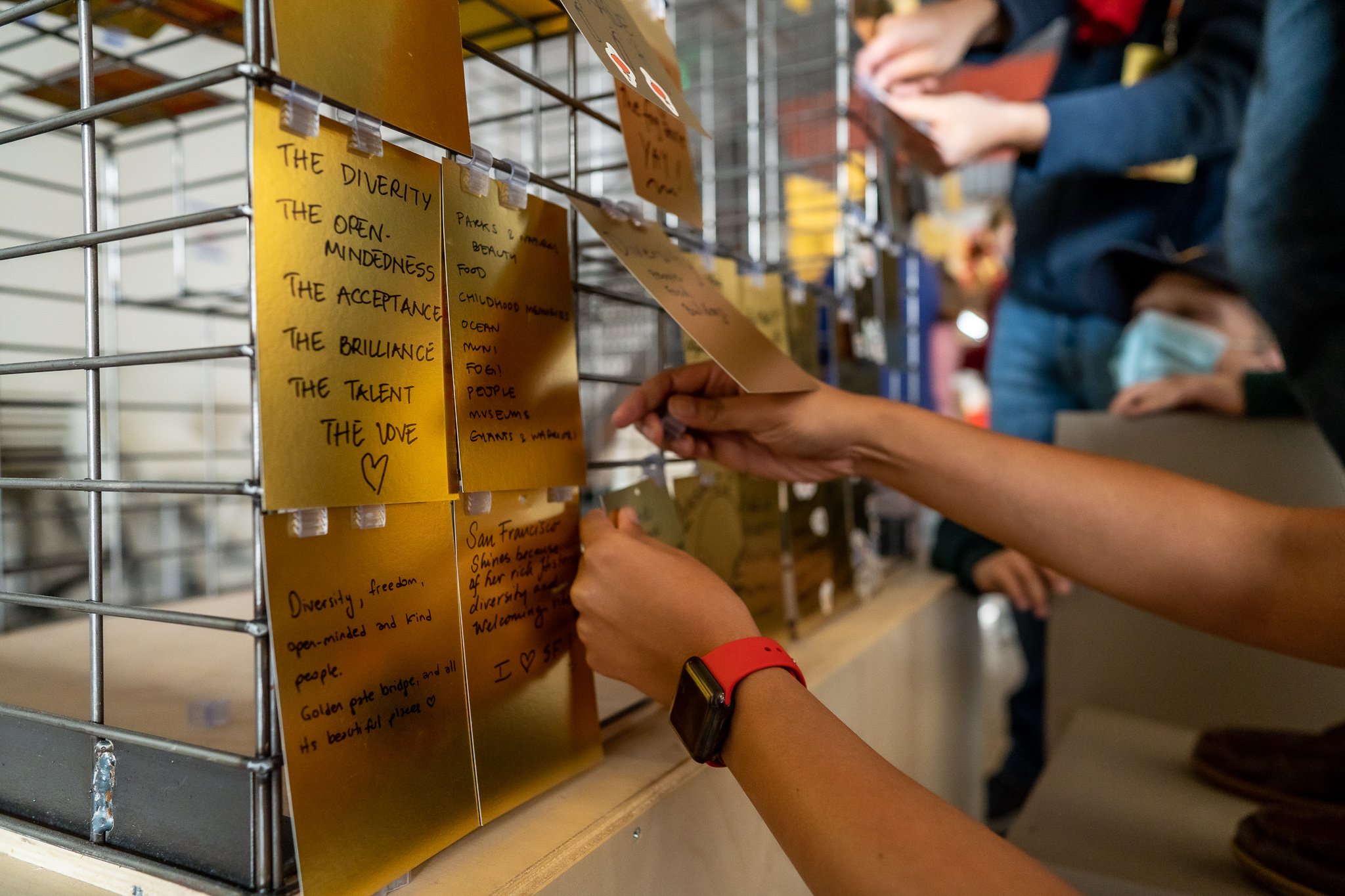 A great little gem of a gallery right on the water.