Skip to main content
Artworks
The Death of Marat

More about The Death of Marat

Marat was a successful doctor who apparently got tired of healing people and doing good, and decided to go into the revolution business instead (much like Osama Bin Laden's second in commend, Ayman Al Zawahiri, who also gave up medicine to go into terrorism).

Marat started a publication called "Friend of the People" which would have more appropriately been called "Rants Against People I want to see Dead", or perhaps "Bloodlust Weekly". He relentless advocated the persecution and execution of people he termed "enemies of the people", and his revolutionary friends happily obliged by chopping off lots of heads, first manually, then by guillotine.

Marat got his comeuppance in two ways: 1) at one point he was forced to flee from the police and spent time hiding in the sewers of Paris where he picked up a disgusting skin disease, and 2) when he was soaking in a tub to relieve the symptoms of that disease, he was stabbed to death by one of his enemies (who happened to be young, female, and according to most accounts and several paintings, very attractive.)

It turns out you can be a monster with bad skin and still look good in death when one of your fellow monsters is as talented as Jaques Louis David...

Here is what Wikipedia says about The Death of Marat

The Death of Marat (French: La Mort de Marat or Marat Assassiné) is a 1793 painting by Jacques-Louis David depicting the artist's friend and murdered French revolutionary leader, Jean-Paul Marat. One of the most famous images from the era of the French Revolution, David painted it when he was the leading French Neoclassical painter, a Montagnard, and a member of the revolutionary Committee of General Security. Created in the months after Marat's death, the painting shows Marat lying dead in his bath after his murder by Charlotte Corday on 13 July 1793. Art historian T. J. Clark called David's painting the first modernist work for "the way it took the stuff of politics as its material, and did not transmute it".

The painting is in the collection of the Royal Museum of Fine Arts of Belgium. A replica, created by the artist's studio, is on display at the Louvre.

Check out the full Wikipedia article about The Death of Marat

The Death of Marat is mentioned on our blog - 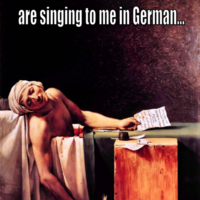