This painting was commissioned by the architect Ithiel Town, who changed his mind, after he saw it, and refused to purchase it.

Cole composed this painting at an enormous scale in order to stand out among all the other things in his patron's library.

More about The Architect's Dream

View all
Catalog Number
1949.162
Credit Line
Purchased with funds from the Florence Scott Libbey Bequest in Memory of her Father, Maurice A. Scott
View all 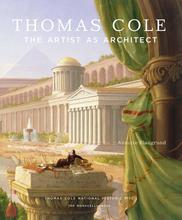 Thomas Cole: The Artist as Architect by Annette Blaugrund 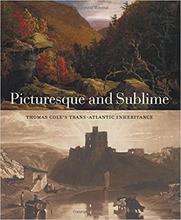 Towering above most professional basketball players, The Architect's Dream by Thomas Cole was a professional miscalculation of enormous proportions.

The ambition of it, in the spirit of the pyramids and temples mashed up into its scenery, is what makes it great. In fiction, dream sequences are challenging to write, because you have to make sure that they still align with a coherent story; likewise, Cole has clearly let his imagination run wild in this work, fueled by his love for majestic, ancient buildings and his wish that they would all magically occupy one space. In this sense it qualifies as a magical realist self-portrait, showing the quintessential architect wearing what appears to be a full-length robe, looking at this fantastic composition from his perch of oversized books. As Cole wrote, architecture "opens a world beyond the visible in which we dwell...Ever hovering on the verge of the impossible, on it the mind does not dwell with satisfied delight, but takes wing & soars into an imaginary world."

Originally, Ithiel Town, the man who would later build Hartford's gothic revival Wadsworth Atheneum, was impressed by Cole's simultaneous accomplishment in both painting and architecture. At the time that Town offered to commission this painting, Cole's nephew and adopted son, Henry Bayless, had been working in Town's architectural office, helping to draw up plans for New York University. Town, with his gargantuan collection of books, told Cole that he would give him some, along with some stacks of cash, in exchange for this landscape. A year later, Cole presented him with this behemoth of a painting, seven feet tall and four and a half feet wide. The idea was for the work to be large enough to compete for attention with all the books and other knickknacks in Town's library. So as to "seal the deal," he hoped, Cole literally wrote the business arrangement in stone, on the column supporting the man: "PAINTED BY T. COLE FOR I. TOWN ARCHITECT."

Unfortunately, Town's reaction was not a good one. It wasn't in the style of Cole's work that people already knew and loved. It wasn't broke, Town griped, and still, Cole had to fix it. The deal was off. He liked the concept, Town wrote, but "I wish the landscape to predominate," rather than for the architecture to take center stage. Cole couldn't sell the huge thing, and it remained in his family's possession until the Toledo Museum of Art bought it with funds from glass baron and museum co-founder, Florence Scott Libbey.

Here is what Wikipedia says about The Architect's Dream

The Architect's Dream is an 1840 oil painting created by Thomas Cole for New York architect Ithiel Town. Cole incorporated pieces of architecture from Egyptian, Greek, Roman, and Gothic styles in various different parts of the painting, having dabbled in architecture previously. Cole finished the painting in only five weeks and showed it in the National Academy of Design annual exhibition that year. However, the painting was not well received by Town, who refused to accept the painting because he claimed that it was "exclusively architectural".

In a letter written in the late 1830s, Cole stated that:

For architecture to arrive at the perfection which we see in the best examples of Greece, Ages of expression and thought must have been necessary [for] the human mind [to] have traveled by slow degrees from the rude column of unknown stone such as formed the druidical structures through the stupendous portals of Egyptian Art to unsurpassed beauty of the Grecian Temple...Roman architecture is but depraved Greek. The forms are borrowed but the spirit was lost & it became more and more rude until it sank to the uncouth incongruities of what are called the dark ages... [Gothic] Architecture aspires to something beyond finite perfection[.] It leaves the philosophic completion of Grecian Art when all is finished to the eye and touch and appeals to the imagination. Partaking of the Genius of Christianity it opens a world beyond the visible in which we dwell...All is lofty, aspiring and mysterious. Its towers and pinnacles climb toward the clouds like airy fabricks. Ever hovering on the verge of the impossible, on it the mind does not dwell with satisfied delight, but takes wing & soars into an imaginary world. The longings, the imaginings, the lofty aspirations of Christianity have found expression in stone.

The painting was acquired by the Toledo Museum of Art in 1949.

It features on the cover of the 1991 book The Passion of the Western Mind by Richard Tarnas.

Wikimedia Commons has media related to The Architect's Dream by Thomas Cole.

Check out the full Wikipedia article about The Architect's Dream

Right away, I am taken back by the sheer scale of this painting. This painting is essentially a microcosm of what neoclassical architects sought to achieve with their creativity and skills within the coming years, or perhaps what they has simply dreamed of achieving. We can see a wide variety of buildings, most of which resemble those that were being created at the time, such as the roman style pillars and roofs, as well as a classic-style church. In the background, we can see a giant pyramid, not unlike the ones created by the Egyptians. From this, we can also infer that the Egyptians, with their dedication to creating large structures and leaving their own mark on art and history, may have served as an inspiration to the people and architects of the neoclassical era.

This is a beautiful example of a Neoclassical painting by Thomas Cole. He appears to have combined a Greek/Roman port with a European church/tree area, and a pyramid in the background sky. This is an example of neoclassical art because of the combination of the Ancient Greek/Roman port and pillars (specifically too the one the man is laying on), a pyramid in the background, and European church/area all in one painting (presumably all in the same area and not separate "worlds" if you will). I get the feeling Thomas Cole had a passion for all these areas due to the person lounging on a pillar with study material around him; taking his surroundings in.

I love the angle and perspective this painting is done! The structures with all the pillars and what looks to be like a church mesh together well in the photo because of the similarities. Neoclassical was referred to as something being simple and symmetrical. This painting has so much symmetry with all the straight architecture lines and buildings fitting together with their shape.

This is such a beautiful painting! You get to see the detail in the background even as the photo gets further back! It Is such an atmospheric photo!

The Artist does a great job at incorporating linear depth and time into this painting. It appears as though the style architecture gets newer as it gets closer to the viewer's perspective.

I like this perspective painting because it shows me how great the palace is, with the extended wall and the flickering mountain behind it. There's one person laying on the rock with the painter's name on it, which I think is interesting.

I really like the perspective in this painting. The painting has so much depth. We can see the curtains closely as we are looking out the window. I like how we can see the church is closer than the Greek temple style buildings, and they are closer than the mountain in the background. I believe this is a good use of one point perspective since things get smaller as they get farther away. I think the choice of colors was also very skillful in this painting. I like the very natural hues of green and white used. Space is also used very well in this painting so that the painting has many elements going on in it, yet it still is not too busy or overwhelming. I also like the line in the painting. I like how the lines of the Greek-temple looking building conveyed strength and sturdiness. These lines also created a texture of their own which I find interesting.

I think that this is a really beautiful painting and I love the different elements of architecture that are shown.