Bosch initially produced this work as a commission for a bourgeois family, whose figures he painted into the image, before erasing and overpainting them.

This is one of two Bosch works with the title Ecce Homo. 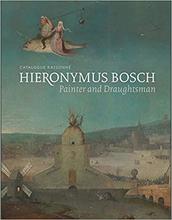 Because the biography of Bosch himself is so minimal, it wasn't until dendrochronologists, people who date wood (not romantically, but scientifically) analyzed the oak panel on which Ecce Homo was painted that we obtained a firm date for it.

The experts concluded that this work originates from a time prior to his other Ecce Homo painting, predating it by probably around 20 years. The scene shows the humiliating presentation of the martyr of Christianity to the people calling for his execution, by the Roman governor, Pontius Pilate, according to Jerome's Latin Vulgate translation of the Greek book of John. Albrecht Dürer and Hans Holbein are among the many other artists who have produced versions of this scene. It might not look like it, but this work is a formal ancestor of the Far Side one-panel comic strips: Bosch gives the characters dialogue, placing words next to the characters, just like comic speech bubbles.

The phrase "Ecce Homo," which Bosch added here with gold leaf, was coined by Jerome as a translation of the Greek "Ἴδε ὁ ἄνθρωπος," meaning "behold the man." "Behold," says Bosch's Pilate to the crowd, "this is the guy, right here." The crowd tells him to get it over with, and the third utterance Bosch inscribed in this work is coming from the lower left: "Salve nos Christe redemptor (Save us, Christ Redeemer)." These words emerge from what look like ghosts, because they were originally the people who commissioned this work, before Bosch painted over them. Did their check bounce? Did they have a case of buyer's remorse? Or maybe they decided that paying Bosch to shoehorn them into a scene of the birth of Christianity was, as they say, a little much.

The Bosch Research and Conservation Project used X-ray radiography (XRR), infrared photography (IRP), and infrared reflectography (IRR) to identify the pigments Bosch used here and to understand the layers of the painting. Bosch did the martyr's robe in Azurite, a pure blue which, according to the Blue Rider group and Vedic mystics, is a holy color. According to Pliny the Elder, Azurite has a medicinal use in nourishing the hair and eyelids. The name of Azurite comes from Arabic and the Persian word lāžward, which means lapis lazuli. Lapis lazuli is a deep blue metamorphic rock that has been coveted since antiquity for it's brilliant color.

Here is what Wikipedia says about Ecce Homo (Bosch, 1470s)

Ecce Homo is a painting of the episode in the Passion of Jesus by the Early Netherlandish painter Hieronymus Bosch, painted between 1475 – 1485. The original version, with a provenance in collections in Ghent, is in the Städel Museum in Frankfurt; a copy is held the Museum of Fine Arts in Boston. The painting takes its title from the Latin words Ecce Homo, "Behold the Man" spoken by the Roman Prefect Pontius Pilate when Jesus is paraded before a baying, angry mob in Jerusalem before he is sentenced to be crucified.

This painting first uses a foreshortening perspective, where the main characters closer to us are much larger than the distant ones and the house. Secondly, the whole painting gives people a sense of extending into the distance. Almost all the objects slowly disappear at the vanishing point in the distance. Besides, the colors in the near part of the painting are extremely vivid. The main colors used are blue, red, and green to portray the dress of the figures. The painting depicts the crucifixion of Jesus. In the scene, only Jesus' clothes are blue, which illustrates the holiness of Jesus. The author's depiction and use of the color of the Roman soldiers and the people below the steps show their rage and anger.