Jesus shows up and St. Anthony's like, "Yas, king."

The devil's got all his buddies piled up like cartoon characters in a nearby cave hoping Christ will just bounce. The painting calls him Saint Anthony Abbot, but don't be fooled. It's the same Saint Anthony that has a terrible road trip through the desert. The same story that's fascinated artists the likes of Dali, Ernst, Bosch and others for centuries. Carracci's contribution to the conversation is to give a little shelter Anthony's way. Paintings of the story usually venture off into torture porn territory, with a heavy bent on the troubles Anthony goes through in staying true to God. Here, there's a nice silver lining coming his way. That doesn't usually happen.

Carracci painted this work on a copper surface to give it that extra sparkle. The patron was obviously more religious than the average bear, given the contrived Christ cloud saving the day. Also, they would have been super wealthy. Copper on its own wasn't cheap. and there weren't many artists in Rome during Carracci's career that bothered to learn how to use it as a painting surface. The practice was a novelty imported from the Low Countries. All told, a bill grew by a healthy number of zeroes if an artist brought copper into the mix.

It makes a lot of sense, then, that the painting hung in Cardinal Scipione Borghese's personal gallery. Scipione only knew how to do two things: Be a huge asshole and collect art. His uncle, the Pope, vested him with the fate of the Vatican's bank accounts. It's a role that required wrecking ball-sized huevos, and a job that made him one of the richest and most corrupt men in Europe. If he didn't commission the artwork outright, it's fair to presume someone was forced to gift it his way. Dude had priors, is all I'm saying.

Jesus arrives on a cloud laced with angels and interrupts the devil and some demons torturing St. Anthony, trying to get him to kick his religious habit.

We know who is going to have the upper hand here. By the look on the devil's face, he knows it too. Jesus, on the other hand, is acting as if it's no big deal. For him it probably isn't.

The devil's pet lion is wearing devil horns and a hairdo straight out of a vintage 2005 Beyoncé music video.

Christ Appearing to Saint Anthony Abbot or The Temptation of Saint Anthony is a 1598-1600 oil on copper painting of Anthony the Great by Annibale Carracci. It was acquired in the 19th century by an English collector and bought in 1846 by the National Gallery, London, where it still hangs.

The saint's pose is heavily influenced by that of Adam in Michelangelo's Creation of Adam on the Sistine Chapel ceiling. The demons seem to draw on Flemish paintings of the saint's temptation, according to a compositional canon well-seen in a print by Antonio Tempesta.

It was recorded in the Borghese family collection in 1650 and Giovanni Pietro Bellori wrote it was worthy "of supreme praise", describing it in his 1672 Lives of the Artists as "the small copper [painting] in the Villa Borghese [of] Saint Anthony afflicted by monstrous demons, lying with his arms outstretched towards the Lord who appears to him to aid him".

Christ appearing to Saint Anthony Abbot is mentioned on our blog -

Jesus is the reason for the season
March means Easter, and we all know that Easter means chocolate eggs, cute lil’ bunnies, and a… 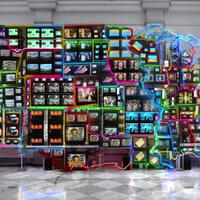