Die was painted in response to the race riots during the civil rights movement and was partially fueled by a curator’s rejection.

What the Artist Saw: Faith Ringgold by Sharna Jackson 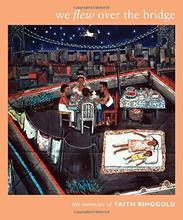 We Flew over the Bridge: The Memoirs of Faith Ringgold

Faith Ringgold’s Die, of her American People Series, is a chilling and sobering depiction of race relations in America in the late 1960s.

It’s easy to see that the subject of this painting came straight from Ringgold’s heart. At the time it was painted in 1967, riots were happening all over the country, with particularly gruesome ones in the cities of Detroit and Newark. Die was inspired by those trying times, but it was created with the hope that there wouldn’t be many more of these incidents.

While the inspiration was fueled by the race riots, Ringgold’s passion and determination to prove herself as an artist were also major contributing factors to this painting’s creation. It all started because Ringgold had wanted to participate in the first World Festival of Black Arts, but the curator of the show wasn’t confident in Ringgold’s work, citing a lack of rhythm and movement in her work.

Ringgold took offense, as she should have, and used it to fuel the fire for her to create something special. She now had motivation as an artist, and motivation as a Black woman, to put something out into the world that spoke to people in a myriad of ways. Sometimes spite can be a good thing.

Die depicts both Black and white adults fighting each other, fleeing one another, or injured by each other. Their faces are all the same, which suggests that the seemingly different people in the painting are the same people at different stages of a scuffle. Static and toward the bottom of the painting are a white boy and a Black girl huddled together in fear.

I think she managed to capture rhythm and movement pretty well. From a stylistic and form perspective, Ringgold took inspiration from the contemporary history painting of Jacob Lawrence, as well as Pablo Picasso’s Guernica, which she visited frequently when it was on display at MoMA. Die isn’t an abstract painting, but it does have similarities in the way that space and flatness are utilized. If you look at each one side by side, you can definitely see the thread that Ringgold pulled on to help her create Die.

This painting is hard to look at. In fact, one anecdote about the painting is that, at its gallery debut, a woman got off the elevator, took one look at it, yelped, and fled. The painting doesn’t shy away from its subject matter. But it really shouldn’t. Part of the reason things stay as bad as they do is that so many people are afraid to face things and acknowledge them for what they are and confront them head-on. If even one person sees this painting and has their opinion swayed, then Ringgold has done her job.