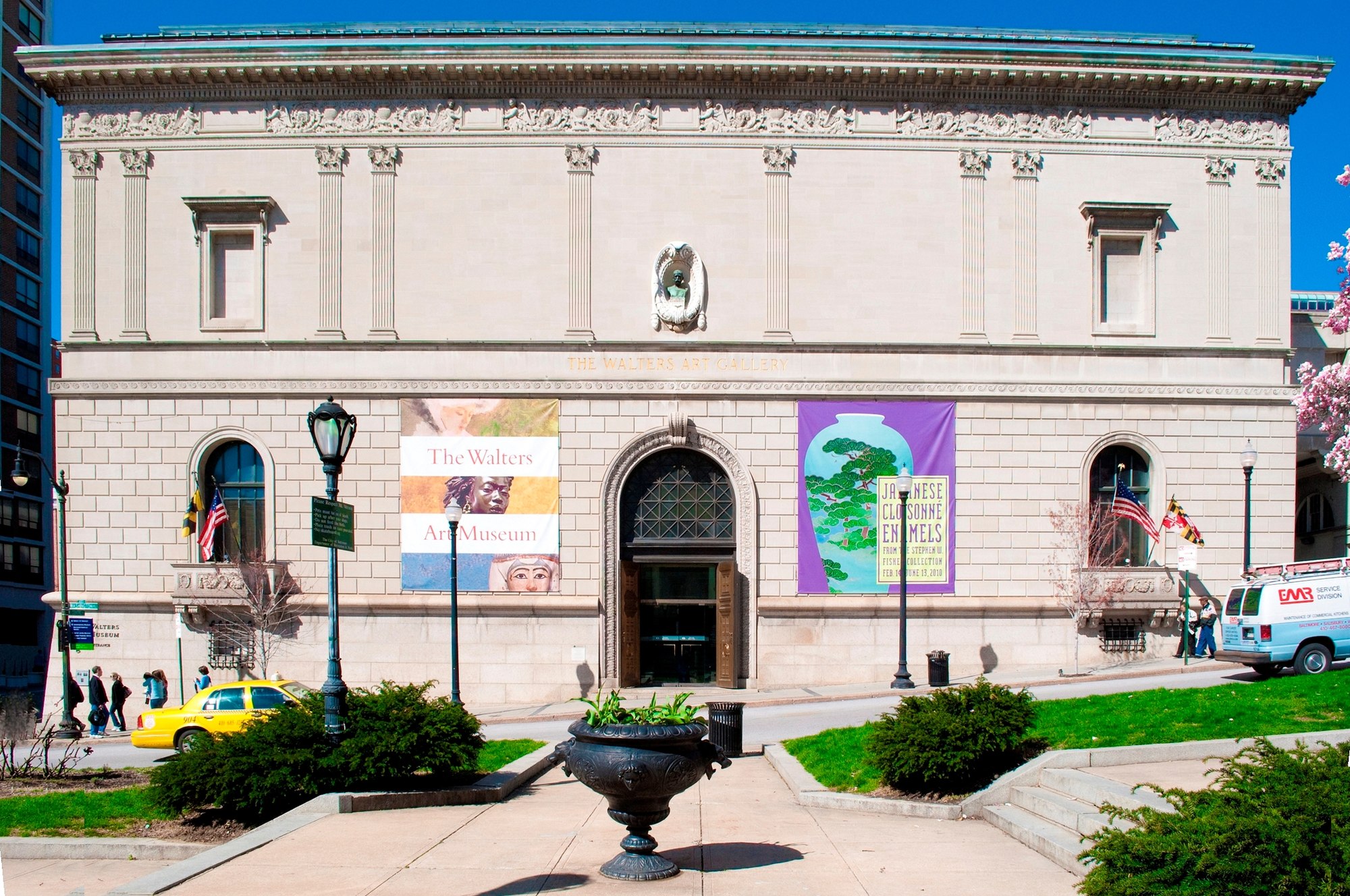 Admission to the Museum has been totally free since 2006.

The story of the Walters Art Museum begins with a very rich, but very generous, family.

Well, the real story begins with William T. Walters, who worked his butt off to earn the money needed to assemble a fabulous art collection. His son, Henry, benefitted from having a rich daddy with great taste in art and ultimately had an infinitely easier time – but isn’t that always the case?

William amassed his fortune in the liquor, banking, and railroad industries in mid-nineteenth-century Baltimore. Like every good rich tycoon, he also started collecting art in 1850. William’s taste in art evolved as he traveled abroad, living in Europe and taking in the local art instead of fighting in the Civil War. He took a liking to the very humble stylings of French imperial art, like the works of Jacques-Louis David, and got busy with his checkbook, establishing his European art collection by 1865.

William had a good eye and an acclaimed sense of taste. He served as the United States art commissioner to the Paris Universal Expositions in 1867 and 1878 and the Vienna Universal Exposition in 1873. He even began showing his glorious collection in a museum-like setting. Once a year, he opened his home to the public, allowing visitors to experience his art for a small fee. Surprisingly, Walters did not profit off these showings; he donated all of the proceeds to the Poor Association of Baltimore. These early, altruistic exhibitions foreshadowed the tuition-free museum that this collection would eventually become.

William left his acclaimed art collection to his son Henry, who expanded on his father’s foundational collection of European and Asian art. Henry’s goal was to create an encyclopedic collection with a little bit of everything from everywhere. It turns out that William walked so Henry could run. Whereas William collected works by artists like Bayre and Millet, Henry collected Ingres, Manet, and Degas. Henry’s most notable acquisition happened in 1900, when he became the first American to own a Virgin and Child painting by the coveted Italian master, Raphael. Henry eventually gifted the entire art collection, two buildings, and some cash money in the form of an endowment to the city of Baltimore, and the museum opened in November 1934.

Here is what Wikipedia says about Walters Art Museum

The Walters Art Museum, located in Mount Vernon-Belvedere, Baltimore, Maryland, United States, is a public art museum founded and opened in 1934. It holds collections established during the mid-19th century. The museum's collection was amassed substantially by major American art and sculpture collectors, a father and son: William Thompson Walters, (1819–1894), who began collecting when he moved to Paris as a nominal Southern/Confederate sympathizer at the outbreak of the American Civil War in 1861; and Henry Walters (1848–1931), who refined the collection and made arrangements for the construction of a later landmark building to rehouse it. After allowing the Baltimore public to occasionally view his father's and his growing added collections at his West Mount Vernon Place townhouse/mansion during the late 1800s, he arranged for an elaborate stone palazzo-styled structure built for that purpose in 1905–1909. Located across the back alley, a block south of the Walters mansion on West Monument Street/Mount Vernon Place, on the northwest corner of North Charles Street at West Centre Street.

The mansion and gallery were also just south and west of the landmark Washington Monument in the Mount Vernon-Belvedere neighborhood, just north of the downtown business district and northeast of Cathedral Hill. Upon his 1931 death, Henry Walters bequeathed the entire collection of then more than 22,000 works, the original Charles Street Gallery building, and his adjacent townhouse/mansion just across the alley to the north on West Mount Vernon Place to the City of Baltimore, "for the benefit of the public." The collection includes masterworks of ancient Egypt, Greek sculpture and Roman sarcophagi, medieval ivories, illuminated manuscripts, Renaissance bronzes, Old Master European and 19th-century paintings, Chinese ceramics and bronzes, Art Deco jewelry, and ancient Near East, Mesopotamian, or ancient Middle East items. Dorothy Miner became its first Keeper of Manuscripts in 1934 and held the post until her death in 1973.

In 2000, "The Walters Art Gallery" changed its long-time name to "The Walters Art Museum" to reflect its image as a large public institution and eliminate confusion among some of the increasing out-of-state visitors. The following year, "The Walters" (as it is often known locally) reopened its original main building after a dramatic three-year physical renovation and replacement of internal utilities and infrastructure. The Archimedes Palimpsest was on loan to the Walters Art Museum from a private collector for conservation and spectral imaging studies.

Starting on October 1, 2006, the museum was enabled to make admission free to all, year-round, as a result of substantial grants given by Baltimore City and the surrounding suburban Baltimore County arts agencies and authorities. In 2012, "The Walters" released nearly 20,000 of its own images of its collections on a Creative Commons license, and collaborated in their upload to the world-wide web and the Internet on Wikimedia Commons. This was one of the largest and most comprehensive such releases made by any museum.

Check out the full Wikipedia article about Walters Art Museum