Vulcan was blacksmith to the gods. You can see his big hammer in Edoardo Paolozzi’s sculpture, a giant appropriately made out of geometric strips of steel flesh.

Vulcan was an arms industry onto himself. He made Achilles' armor, Eros' bow and arrows, and Hermes' winged helmet and sandals. No surprise that since the fall of the Roman Empire and rise of Christianity, he has been heavly involved in loads of hardhitting work. At some point in the 1800's he became especially popular, probably due to all that industrial revolution steam power and metalwork going to people’s heads.

In his illustrious legacy, nothing beats Vulcana, the Welsh strongwoman (real name Kate Williams, who lived from 1875 – 1946). At age 15 Vulcana ran off with Atlas, a scrawny and married-with-three kids, William Hedley Roberts, and toured music halls in Europe and Australia as the Atlas and Vulcana Group of Society Athletes. They performed many acts of great physical strength but Vulcana’s specialty was lifting men.

Not far down the list there is Dr. Spock (RIP), the enormously important Vulcan in Star Trek, and then the three Vulcan comics (by Fleetway in England in 1975-1976, DC and Marvel). Black Vulcan, the African American superhero of Super Friends, turned energy into electrical superpowers. Vulcan’s contribution to the LGBTQ community is Vulcan, the gay pornography magazine.

That’s the tip of the iceberg. Scientists love him, too. Vulcanization is the alchemy that makes rubber stronger. Vulcan is a programming language now known as dBase. And somewhere in the UK there’s a Vulcan laser that can shoot up to 2.6kJ of laser energy in long pulses (nanosecond duration) and up to 1 PW (1015 W) peak power in a short pulse (500 fs duration) at 1054nm. Ok then.

Shipbuilding yards, cars and motorcycles, a variety of the steam and diesel locomotives, and the single-engine bomber Vickers Vulcan (from the 1920s) have been inspired by Vulcan’s ability to transform raw materials into useful kit.

Perhaps most obviously, given Vulcan’s original job arming the gods, there is a ton of stuff that goes bang. The short-range pistol M167 Vulcan, the air-defense Gatling gun M61 Vulcan, the six-barreled Vulcan M-11-9, a semi-automatic pistol by Vulcan Armament…it’s a long list, better we stop here.

Vulcan is mentioned on our blog - 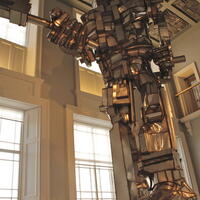 Largest Self-Portrait Ever?
Paolozzi as the god of art, fire, and other dangerous things? Photo by Ezinda Franklin-Houtzager … 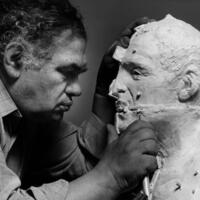