More about The Proposition

As with so many budding relationships, what's going on here is either a "proposition" for marriage or prostitution.

At just 1 foot by 9 inches, Leyster's powerhouse micro-work has produced more scholarly dissension than if someone published viable proof that Leonardo da Vinci wasn't human at all, but rather a group of clever hamsters in a relatively lifelike human suit. Prominent scholar Frima Fox Hofrichter first named this painting The Proposition in her monograph on Leyster. Basically, she wrote what we were all thinking: That the furry hat man looks super horny, and the young woman minding her own business looks really uncomfortable. I'd be uncomfortable with that hand sliding down my shoulder, too. Seriously, dude, no touchy. This is clearly a party of one.

Before Hofrichter's book, however, the work was simply unnamed. The Proposition proved too controversial for many museum folk in the art community, so the work is AKA Man Offering Money to a Young Woman. In fact, that's the very name the picture hangs under this very moment in the Mauritshaus. The naming issue derives from Leyster painting a really compelling and complicated story. Oh, and blatant chauvinism.

There's the obvious components to the scene. The money, the sewing, the hat. Not to go too Sherlock on you here, but we can tell a lot about what's going on by simple and obvious clues littered about. First off, the fur hat. It's pretty simple, the guy's foreign. No one in Haarlem (Leyster's home and where we're to presume the scene is set) wore hats like that. He's likely from a much colder climate back east, and Haarlem being an international port at the time would support that.

Now the tricky bits. The sewing. Sewing was/is a Dutch double entendre for sexy time. Which...really guys? It must sound more sensual in Dutch, because I can't even imagine how that pick up line ends. "Hey, do you have cloth and a stitching pattern? Because I'd like to sew you up good." Yeah, not going to happen.

So the sewing could go either way, I guess. But then there's the money. Money and prostitution is obvious. But money was also exchanged as a kind of engaged-to-be-engaged ring in the Low Countries. Men would give women a little coin and then get a date, and maybe marriage, and then comes Jan with the baby carriage. Could be perfectly wholesome. We all know nothing greases the wheels of love more than showing how much change you happen to have in your trousers at that moment. However, just look at their faces. The guy looks like he's ready to listen to only one answer, and the woman looks like she's on the verge of tears.

Not to mention, where in the hell would they be on a dark cold night where the guy would feel free to walk up and do that? It certainly isn't her family's home, unless there's a missing companion piece where furry hat is being lit on fire as an intruder and overall asshole. There isn't anything homey on the walls, or otherwise suggesting that she's in a safe place. No, it's obvious what's going on. And the Mauritshaus should wake up, do the right thing, and stop acting like this is anything other than prostitution. Every major genre painter in the Low Countries was painting "proposition" scenes in this time, it was one of the era's most popular and profitable subjects. And the idea that this may not be one because it was painted by a woman is as preposterous as that man's hat.

Brunhilde: "You propose what?"

Brunhilde: "Come on, out with it."

Lodewijk: "I ... Ah, this hat is stifling my creativity, never mind."

Here is what Wikipedia says about The Proposition (Leyster)

The Proposition is a genre painting of 1631 by Judith Leyster, now in the Mauritshuis in The Hague, who title it Man offering money to a young woman. It depicts a woman, sewing by candlelight, as a man leans over her, touching her right shoulder with his left hand. He is offering her coins in his right hand, but she is apparently ignoring the offer and concentrating intently upon her sewing. As we see the female protagonist ignore the advances of her suitor, this painting has been considered to potentially be a feminist work.

The man wears dark clothing, and the dark tones as well as his shadow cast behind him and across his face from the angle of the candlelight give him a looming appearance. In contrast, the woman is lit fully in the face by the candlelight, and wears a white blouse. It is an early work by Leyster, who was 22 years old in 1631.

Check out the full Wikipedia article about The Proposition (Leyster)

Francisco is obviously not Dutch, because Brunhilde is a Nordic name. He should have used Lotte or Roosje or Sanne.

The Proposition is mentioned on our blog - 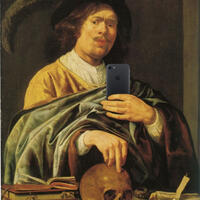 Juicy gossip, straight from the Mauritshuis!
Jan Miense Molenaer, the Kylie Jenner of his generation. So if you’re all about Rembrandt, Vermeer…