Skip to main content
Artworks
The Nostalgia of the Infinite

More about The Nostalgia of the Infinite 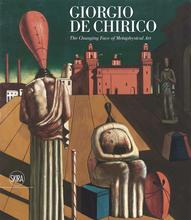 Despite its poetic name, The Nostalgia of the Infinite looks more like something you’d encounter in a nightmare than a daydream.

If you’re familiar with tarot cards, you know the Tower card is one of the worst cards to pull, even more so than the Death card. The Tower, typically depicted with people leaping from the windows and engulfed by flames and lightning, is meant to be a sign of unforeseen change and chaos. In Nostalgia of the Infinite, de Chirico manages to convey the same ominous feeling of danger without adding extra visual symbols for death and destruction.

In The Nostalgia of the Infinite, two lone figures stand overshadowed by the looming square tower and dwarfed by the painting’s ominous setting. As with Surrealist and Metaphysical art, both of which de Chirico associated himself with, the viewers alone must interpret the painting. Perhaps the skyscraping tower represents the “infinite” and the figures are nostalgic for a time when they were able to reach it. Or perhaps the “infinite” is the practically-invisible horizon in the background, its view obstructed by the tower. Maybe the figures have left their ivory tower only to feel overwhelmed by the vastness of reality. Or, as the Tower tarot card would suggest, the tower symbolizes a sudden change that left those affected feeling isolated and defeated. Whatever the tower represents, it was significant enough for De Chirico to revisit in his 1937 painting The Tower of Silence.

The Nostalgia of the Infinite was dated by de Chirico himself as a 1911 painting, but if you look at his work chronologically, you’ll see there’s no way it was finished in 1911. De Chirico hadn’t quite developed his now-famous mature style of using sharply contrasting colors and shadows until around 1913, so Nostalgia of the Infinite had to have been painted sometime between 1913 and 1914. De Chirico probably dated the painting long after its completion, most likely in 1926 before his first major exhibition, and, in trying to recall the specific year he finished Nostalgia of the Infinite, associated the painting with the year of his first arrival in Paris‒1911. Or maybe he was just really bad with years.

For you gamers out there, The Nostalgia of the Infinite inspired the Japanese and European box art (but unfortunately not the North American cover art) for the 2001 PS2 video game Ico. Creator Fumito Ueda, who also developed the popular game Shadow of the Colossus, cited de Chirico as a major visual influence for Ico because his surrealist environments matched the allegorical world of Ico. The critically-acclaimed Ico is considered one of the best games of all time for its gorgeous artistic style and ability to evoke emotions, and it went on to become one of the most influential games as well, inspiring developers to make video games an art form. So the next time you play a video game with a striking visual style, you have de Chirico to thank for that.

Here is what Wikipedia says about The Nostalgia of the Infinite

The Nostalgia of the Infinite is a painting by the Italian metaphysical painter Giorgio de Chirico.

The subject of the painting is a large tower. The scene is struck by low, angular evening light. In the foreground below the tower are two small shadowy figures resembling those in future works by Salvador Dalí. This painting is the most famous example of the tower theme which appears in several of de Chirico's works.

Although the painting is dated 1911, this date is generally held in question. It has been speculated by the Museum of Modern Art in New York that it was created from 1912 to 1913 while the Annenberg School for Communication suggests 1913–14. According to art historian Robert Hughes, the painting draws inspiration from the Mole Antonelliana in Turin.

This painting, amongst other works by Giorgio de Chirico, influenced the painting by Fumito Ueda for the front cover of the video game Ico used in the Japanese and European versions of the game.