More about Rosie the Riveter 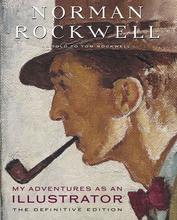 Everybody knows the classic “Yes we can!” version of Rosie the Riveter, but we should spend some time getting to know this Rosie.

Rockwell’s Rosie made her first appearance on May 29, 1943 on the cover of the Saturday Evening Post magazine. She was the epitome of the booming female workforce in the wake of the Great Depression and an homage to the women who weren’t about to sit around waiting for the men to come back from war and take care of all the heavy work.

Norman Rockwell was a champ at depicting the American identity and the experience of everyday women during the women’s rights movement. This Rosie even played a role in women’s rights when she helped rally some of the holdouts who turned their noses up at women getting down and dirty in the workplace.

The original painting of Rosie was even sent on tour through the United States to raise money for war bonds. Yes, Rosie the Riveter was one tough lady… sort of.

While Rosie may look like an All American Woman, what with her red, white, and blue outfit, her Red Cross and “V for Victory” pins across her chest to replace a pearl necklace, and her loafer-clad foot crushing Hitler’s “Mein Kampf,” this Rosie is actually only half American woman. The other half is biblical man.

When Norman Rockwell sat down to paint this magazine cover, he called up his friend and neighbor, 19 year old telephone operator, Mary Doyle Keefe. Mary was the perfect model for the piece: the way she held her ham sandwich was perfect, the handkerchief and makeup compact stuck out of her hip pocket just right, she held that rivet gun on her lap like a pro (even though it was a lightweight version of a real rivet gun), but there was just one problem: Mary was only 110 pounds and a tiny little thing.

To get the husky “I mean business” look that Rockwell wanted in his Rosie, Norman took inspiration from classical art. Specifically, Michelangelo’s ceiling in the Sistine Chapel. If you were to take an image of Michelangelo’s depiction of the Prophet Isaiah and lay it on top of Rosie you would hardly be able to tell the difference. Rockwell used Isaiah’s muscular body and elevated angle to give Rosie the look of someone who should be admired and not messed with, complete with a halo made out of a clear visor.

He even took inspiration from biblical quotes of the prophet Isaiah, where he describes the serpent as being a symbol of evil. Does the hose on Rosie’s rivet gun look a little serpentine? That’s to symbolize how her work with the rivet gun is going to help squash evil in the world.

Rockwell did feel bad about making the cute little Mary look ripped AF, according to Mary, Rockwell did give her a call and apologize for putting her face on Isaiah’s body. Thankfully, Mary was totally fine with picture and proud to represent the women who, as she put it, “gave up their nail polish” to help the U.S. win the war.

The painting just screams tough. Rosie the Riveter is tied to World War II. It was sent around the country to encourage women to join the war in some way or another. Whether it be going to work in a factory or buying war bonds, women played an important role in America in the outcome of World War II.

Rosie the Riveter is mentioned on our blog - 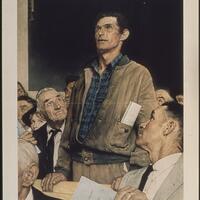