More about One Nation, Indivisible

Dorothea Lange: A Life Beyond Limits by Linda Gordon

While the girl in the middle is looking quite chipper, don’t be fooled by her exuberant demeanor. For these young ladies, things were about to change drastically and not for the better. Perhaps this doesn’t come as a surprise. I mean, it was kind of Dorothea Lange’s thing to photograph things that tug at your heart stings and make us wonder, why is society so messed up?

The date was December 7th, 1941 and history was being made. On this day, the Japanese Navy attacked the United States naval base at Pearl Harbor, thus marking the beginning of the US involvement in World War II. From this point on, life as a Japanese American became filled with hate attacks, distrust, and relocation into internment camps.

Just a few weeks after this photo was taken, the girl on the right, along with thousands of other Japanese Americans, were forced into a new life in internment camps built across desolate areas east of the Sierra Nevada Mountains. The US government feared that all Japanese posed a risk to national security and therefore had to be detained. You're telling me that this little girl was a threat to the United States? Okay Roosevelt…

This photo was taken at the Rafael Weill Elementary School in San Francisco’s Japantown. Lange lived and worked in San Francisco and beginning in the 1930s, she made the switch from photographing wealthy families for private commission to gallivanting through the city streets on a mission to capture the carnage and social inequality that was (and arguably still is) rampant in our country. Her lust of capturing social injustice and the desolate realities of many of our countries inhabitants is what brought fame and notoriety to Lange’s career.

Xenophobia will likely never disappear. Hate, internment camps, and genocide are all a direct product of the human condition. Not to get too depressing on you all, but it is through addressing and accepting our history that we can learn and improve ourselves. Lange had a way of forcing us to see the things we prefer to not think about, urging us to become more compassionate beings. We can choose to learn about past atrocities...or we can simply see this as a heart-warming photo of loveable little girls singing.

One Nation, Indivisible is mentioned on our blog - 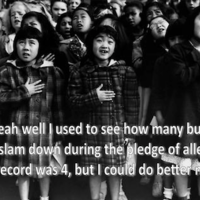