In 2001, the Portrait Gallery almost lost the Lansdowne painting (which had been on loan to the museum since 1968) when its owner decided to sell it.

As any good American knows Georgie was the first President of the United States, lead the Continental Army during the American Revolutionary War, and helped draft the Constitution.

According to historians George was kind of a stud. He was 6 feet tall and very talented. He was an excellent horseman, hunter, dancer, and a theater and Shakespeare fan. There is the unfortunate issue with his teeth though . . . He started losing them at 22 and only had one left by the time he became President. The whole wooden dentures rumor isn't true, his teeth were made out of ivory and gold springs. One of the sets was made with real human teeth that he bought off his slaves. The constant pain and discomfort was real and for that he took laudanum, a tincture containing 10% opium. Luckily nobody was calling for mandatory drug tests yet!

At 27 he married the wealthy and widowed one-year older Martha Dandridge Custis. Though they never had any children together (possible sterility from a bout with smallpox; vaccines are a good thing!) Martha brought two kids from her previous marriage and they later raised two grandchildren.

Then, out of the one and only 100% unanimous vote the Electoral College will ever come to, he became the first President of the United States at 57 years old! John Adams received the second most votes and became Vice President.

George established nearly all of the traditions of the Presidency we still hold today:

An interesting note about slavery and George Washington: Apparently he was hugely against it despite having a few hundred enslaved people. Hypocritical much? Slavery with George was touch and go during his lifetime but in his will he made it expressly clear that after he and his wife died, all the enslaved people he owned (123) were to be set free and that educations were to be provided for the children and a pension was set up for the older ones. Martha also brought many enslaved people to their marriage (153 at George's death) and ended up freeing all of them about a year after her husband died.

The death of our first President at 67 was basically the result of involuntary manslaughter. He was suffering from difficulty breathing and a very bad sore throat when he decided to call a bunch of doctors and the estate overseer who believed the best practice at the time was bloodletting. All three doctors performed the procedure resulting in at least half of George's blood being drained from his body. He died. Accusations of malpractice started to fly that he had been bled to death (obviously). Modern doctors speculate that his original condition was epiglottitis.

The world mourned, including Napoleon Bonaparte who ordered ten days of mourning in France!

Washington is interred next to his wife at their estate Mount Vernon, now a very popular tourist attraction. There was some back and forth with whether he should be moved to the US Capitol building, but those plans fell through several times. Someone even tried to steal his corpse (gross). Eventually, a new tomb was built at Mount Vernon and the key to the inner sanctuary was thrown in the Potomac River.

This portrait is interchangeably called the Lansdowne Portrait named after William Petty, first Marquis of Lansdowne and British Prime Minister to whom this painting was gifted. It was commissioned by Sen. William Bingham and his wife Anne, one of the richest couples in America as a thank you for the Marquis' support during the American Revolution.

Though Georgie's face looks like the one on the one-dollar bill it's not. You're looking for the unfinished Athenaeum painting that is co-owned by the Portrait Gallery and the Boston Museum of Fine Art. They trade off every three years or so, so time your trip right!

Gilbert Stuart actually painted several copies of this portrait. One of them (and apparently the least attractive one) is hanging in the White House and was saved by Dolley Madison during the War of 1812 when the Brits set the house on fire. However, according to Paul Jennings, James Madison's slave and manservant, it was actually the the doorman John Susé and the gardener Mr. Magraw who saved the portrait! Ooooh lying First Ladies!?!?!

Stuart also purposefully misspelled the titles on some of the books in the copies so that it would be easy to tell which was the original. One of the books says "Constitution and Laws of the United Sates."

Here is what Wikipedia says about Lansdowne portrait

The Lansdowne portrait is an iconic life-size portrait of George Washington painted by Gilbert Stuart in 1796. It depicts the 64-year-old President of the United States during his final year in office. The portrait was a gift to former British Prime Minister William Petty, 1st Marquess of Lansdowne, and spent more than 170 years in England.

Stuart painted three copies of the Lansdowne, and five portraits that were closely related to it. His most famous copy has hung in the East Room of the White House since 1800. Numerous other artists also painted copies.

In 2001, to preclude the original portrait's possible sale at auction, the National Portrait Gallery in Washington, D.C. purchased it for $20,000,000.

Check out the full Wikipedia article about Lansdowne portrait

George Washington (Lansdowne Portrait) is mentioned on our blog - 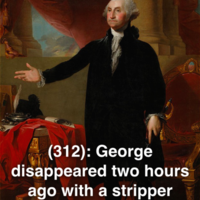 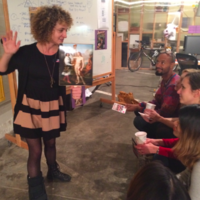 to MuseumHack:  our Ukulele Response
MuseumHack, an energetic bunch of nerds famous for giving the world’s absolute best museum tours… 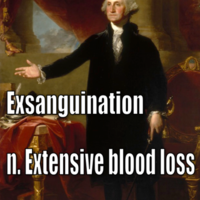