More about Death of Rubén Salazar

Frank Romero is from my hometown! (Fangirl alert!) He was a part of the muralist collective from the 1970s who dubbed themselves “Los Four.”

Much of his work is politically motivated, and he is especially interested in representing the Chicano community of East Los Angeles. That’s where this piece comes in. This vibrant painting belies its tragic subject matter. Drawing upon the style of the Mexican mural tradition, Romero depicts social and cultural turmoil, much in the fashion of artist Diego Rivera.

What does this protest painting depict? In 1970 there was a march in Los Angeles to demonstrate discontent with the disproportionate number of Chicanos killed in the Vietnam War. The protest was a peaceful one, and there was no indication of an imminent riot until police responded to an alleged theft at a liquor store (which the owners later denied). This liquor store was a few buildings away from the Silver Dollar Bar, where Rubén Salazar, a reporter for the Los Angeles Times covering the demonstration, was having a drink.

A police officer fired a tear gas projectile missile into the quiet and mostly empty bar, immediately striking Salazar in the head and killing him on contact. There are speculations to this day about the LAPD targeting Salazar intentionally, due to his investigative journalism on officers planting evidence to falsely implicate Chicano individuals in violent gun crimes.

Frank Romero’s painting captures not only the sudden carnage of the moment, but also how, 16 years later, Salazar’s death as a historic moment is an emblem for the fight for Chicano rights. The agitation and chaos of the riots is echoed by the dynamic brushstrokes and geometric shapes of the cars parked in front. The riot police look like storm troopers, setting the buildings ablaze. However, the violence in this scene is juxtaposed with the beauty of the colors, hues that represent the vibrant soul of the barrio, attacked by this faceless force.

Death of Rubén Salazar is mentioned on our blog - 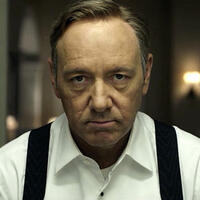 WWFUD: What Would Frank Underwood Do?
You’ve been sitting at home in your sweatpants in the dark for days, binge-watching House of Cards……
Sign up
Forgot Password