More about Carnival in Flanders 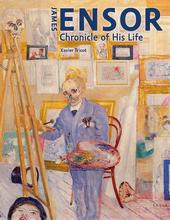 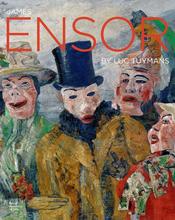 What do Death of Sardanapalus, The Feast of Herod, and Carnaval en Flandre have in common? Lavish costumes, an assortment of critters, and a pessimistic examination of base human nature.

Sure, Carnaval en Flandre lacks the bloodshed of these gorier tableaus. The revelers are armed with flags rather than knives and absolutely no beheading is pictured in frame. Still, without including dismembered bodies or harem massacres, Ensor makes a strong case for human immorality. A gleeful crowd gathers to watch a pair of cats corner a bedraggled bird in a scathing callback to Ensor’s earlier work, The Vile Vivisectors, a criticism of animal testing.

Ensor was a fan of controversy— see Le pisseur, a delightful self-portrait mid-urination. Carnaval en Flandre is a scene from his more famous, earlier work, Christ’s Entry into Brussels. Given the nature of its source material, Carnaval en Flandre becomes yet more troubling: the partygoers have opted to watch an animal’s torment rather than notice Christ riding into the festivities just out of frame.

Despite Ensor’s penchant for the obscene, with time he became a celebrated figure in Belgian society, attaining both knighthood and a barony. Propriety was never his forte, however, even after a monument was erected in his honor. When a 1942 news story misinformed the populace that the artist had died, Ensor came to the very same monument to mourn his own passing. Ensor even lied in his own writings, filling his memoires with fictional anecdotes. He proudly noted that he had switched from artists’ paints to house paints, an assertion seemingly disproved by an examination at the Getty.

Ensor’s quirks— and those of Carnaval en Flandre— are perhaps best justified by an unconventional childhood. Ensor was raised in a souvenir shop that sold Carnival masks, seashells, and stuffed fishes to tourists. This treasury of oddities also housed an assortment of family pets, including cats, parrots, and a lone monkey. Surrounded by a wonderland of trinkets and peculiarities, it’s little wonder that Ensor developed a fondness for bright colors, Carnival imagery, and most everything unconventional.

Carnival in Flanders is mentioned on our blog -

Art History Reader: Gestalt Theory
In any fictional crime show, the detective walks into a scene full of chaos. Instead of being…
Sign up
Forgot Password
Reset Password