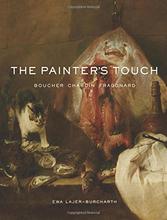 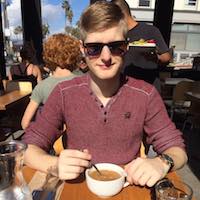 What better way to accentuate the Rococo spirit than to paint the voluptuous tush of your lover?

While it’s not entirely clear if L'Odalisque Brune is actually François’ wife, it seems very likely. For one, François Boucher regularly incorporated his wife and children as models when painting (safe for work) scenes of family. Secondly, Boucher worked smarter instead of harder by replicating this particular portrait but with different heads and faces to satisfy different clients resulting in several distinct copies of this particular scene. This painting, then, is thought to be both his outline for future commissions of this nature and a salacious gift to Madame Boucher.

Though the term Odalisque originally refers to a female slave or concubine, it is used here as a term describing the sexual and erotic fascination common among Rococo portraiture during the reign of King Louis XV of France. Unfortunately, not all of France was convinced by the lighthearted eroticism displayed by Rococo artists including Boucher. His harshest critic, philosopher Denis Diderot, accused Boucher of essentially prostituting his wife though he himself would later admit Boucher’s art was, “such an agreeable vice.” While historians can only speculate on such matters, there’s probably a good chance Madame Boucher knew exactly what she was doing.

Fast forward nearly three centuries and this portrait has been brought back at the center of a scandal involving the firing of an elementary school teacher in Utah. After letting his sixth grade class sift through one-hundred different classical paintings, students expressed discomfort upon viewing Madame Boucher’s huge hiney. This resulted in the unfortunate termination of the teacher and, evidently, a class full of the most sheltered sixth-graders in history learning what a 270-year-old French woman’s ass looks like.

Here is what Wikipedia says about The Brunette Odalisque

The Brunette Odalisque (French: L'Odalisque or l'Odalisque brune) is a painting of c. 1745 by François Boucher, now in the Louvre in Paris. The painter's signature is engraved on the low table. He later produced two other works in the odalisque genre, both known as The Blonde Odalisque.

Check out the full Wikipedia article about The Brunette Odalisque

Brown Odalisque is mentioned on our blog - 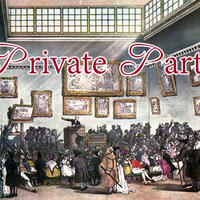 Private Parts: Masterpiece (Lichtenstein)
Private Parts is a series exposing the raw, gritty, and true stories behind artworks in private… 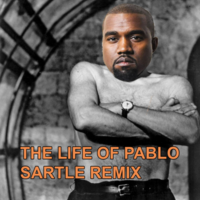 Sartle Remix: The Life of Pablo by Kanye West Part One
If Kanye wants to be like Pablo, we can make that happen.Say what you want about Kanye West, the… 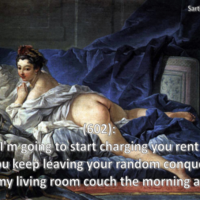