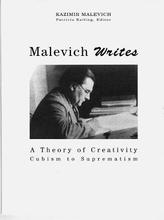 Malevich Writes: A Theory of Creativity Cubism to Suprematism edited by Patricia Railing 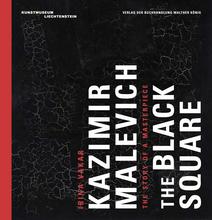 Kazimir Malevich: The Black Square (Story of a Masterpiece) by Zelfira Tregulova

The art world equivalent of the monolith in 2001: A Space Odyssey, Kazmir Malevich’s Black Square is an “embryo of infinite possibilities”, as he calls it.

Arguably the first painting about nothing, this simple on the surface piece that started an entire movement had humble beginnings in a Futurist opera. Black Square (1915) began as a sketch for the opening curtain on the stage of the opera "Victory Over the Sun." The show begins with the curtain being ripped down by two “Futurist Hercules” on a quest to reject time and reason, and achieve a literal victory over the sun. Other characters include Nero/Caligula as the same person.

If that's not strange enough, the libretto for the opera was written in a new language called 'zaum,' invented by poet Aleksei Kruchonykh. Zaum was meant to be a language without meaning or direct translation, my best comparison would be to the nonsense language of Lewis Carroll’s "Jabberwocky" poem from Through the Looking-Glass. As such, "Victory Over the Sun" was not as well-received as Black Square was when first premiered. The audience reacted quite angrily to the show, but it didn’t break into a full riot like The Rite of Spring.

Malevich referred to the work as the beginning of Suprematism, a term he coined for the new movement that sought to untether itself from the confines of visual representation in order to get at a sort of universal, spiritual truth. As he wrote later in his 1927 book The Non-Objective World: "In the year 1913, trying desperately to free art from the dead weight of the real world, I took refuge in the form of the square." When Black Square was first showcased at The Last Exhibition of Futurist Painting 0.10, Malevich made sure it was put in a place of significance so the viewers would see the importance he felt it held, with the painting exhibited high up on a wall in the corner of the room. To anyone Russian the message would be clear, as this placement echoed the sacred spot in a Russian Orthodox home that would traditionally hold an icon of a saint.

Malevich was successful at marketing his piece with the pomp and circumstance he intended. Though, he was not so successful at backdating it. I refer to the work as Black Square (1915) because that is the year most art historians agree it was created, though Malevich said that both Suprematism and this painting were born in 1913. The theory is that, once Suprematism caught on, Malevich fudged his own timeline, backdating the painting to make the movement (and perhaps himself) appear even more prescient and revolutionary. Though to be fair, "Victory Over the Sun" premiered in 1913, so at the very least preliminary sketches of the work were created, but not the painting itself.

Black Square became Malevich’s signature, literally. Years after its premiere, he began to sign many of his works with a little black square. When the painting disappeared from public view shortly after his death, as Joseph Stalin's preferred style of Social Realism took over, it gained icon status. Trying to hide something away gives it an air of mystery and only increases its fame, who knew? The years at the back of the Soviet archives were not kind to the painting, which now "looks terrible" as art critic Peter Schjeldahl writes, going on to describe the neglected artwork as "crackled, scuffed, and discolored, as if it had spent the past 88 years patching a broken window.”

Important as Malevich considered Black Square, and as influential this painting is in the history of modern art, researchers at the Tretyakov Gallery recently found something...surprising.

In 2015, it was revealed that, hidden underneath a layer of paint on the mystical black square, was the text of a racist joke - a joke that also points to Malevich's idea not being as original as we may have thought.

Though not entirely decipherable, historians who discovered the incribed text under a microscope believe the words on the canvas read "Battle of negroes in a dark cave.” This is thought to be in reference to an 1897 comic by French humorist Alphonse Allais that depicts, you guessed it, a black square in a canvas with the caption: “Combat de Nègres dans une cave pendant la nuit” (“Negroes Fighting in a Cellar at Night”). What's worse is that the comic is actually modeled after a work by his friend Paul Bilhaud, who showed an all black painting with a similar title at an 1882 exhibition of the Salon des Arts Incohérents, which was a sort of proto-Dada, satirist art movement. [Allais had other monochromatic jokes like this as well: an all white painting with the title First Communion of Anemic Young Girls In The Snow, and a red one: Apoplectic Cardinals Harvesting Tomatoes on the Shore of the Red Sea (Aurora Borealis Effect). He published them in a book in 1897, together with the black piece inspired by Bilhaud, and a completely silent musical composition titled Funeral March for the Obsequies of a Great Deaf Man, which could be said to anticipate the later work of artist John Cage in the 1950s.]

The inscription by Malevich in Black Square does not necessarily mean he considered this painting, or Suprematism, to be a joke. In fact, the tone of his extensive writing on the subject would suggest otherwise. However, the tastelessness of this little hidden quip, also a timely reminder of the long history of European racism, does take away some of the gravitas Malevich worked so hard to give the work. In any case, its presence also reminds us to be wary of imposing strict timelines or ascribing 'inventors' in the history of art. After all, no idea is born in a vacuum.

Here is what Wikipedia says about Black Square (painting)

Black Square (also known as The Black Square or Malevich's Black Square) is an iconic painting by Kazimir Malevich. The first version was done in 1915. Malevich made four variants of which the last is thought to have been painted during the late 1920s or early 1930s. Black Square was first shown in The Last Futurist Exhibition 0,10 in 1915. The work is frequently invoked by critics, historians, curators, and artists as the "zero point of painting", referring to the painting's historical significance and paraphrasing Malevich.

Check out the full Wikipedia article about Black Square (painting)

This painting stuck out to me because I thought there was nothing to it other than a black square. In all reality, there is not too much more to it, but when looking closer I really noticed the texture. It has a way of drawing you in and making you keep staring at it. This painting is very mesmerizing to me. The texture creates a rhythm that draws my eyes around and around and up and down and back to the beginning. I also like the calmness and simplicity of the work. My brain appreciated not having a hundred things going on in one painting.