More about Back Seat Dodge '38

Hop in the Back Seat of Edward Kienholz's '38 Dodge for a good time.

Americans have long had a love affair with cars, as well as love affairs in their cars. Ed Kienholz was an American and no exception.

Kienholz's art was often inspired by his personal experiences – including steamy teenage sex in the back seat of his dad's old 1938 Dodge. As a kid in Idaho he borrowed the old Dodge, drove to a small town dance, picked up a girl whose name escapes him, and after a little drinking got laid while parked out on a deserted road.

We get to witness this tawdry teenage right of passage through the backdoor of a truncated car. Kienholz loves turning us into voyeurs.

When the LA County Museum of Art (LACMA) exhibited Back Seat Dodge in 1966, the County Board of Supervisors called it 'revolting, pornographic, and blasphemous….' They threatened to shut down the entire museum and deny it funding. As is often the case, many of the Supervisors had not even seen Kienholz’s sculpture. And as often happens, all the hoopla around the possible censorship catapulted Kienholz into the national spotlight. Crowds flocked to the museum and even today it is one of the most popular artworks in LACMA's collection.

In response to the Supervisors demands, the car door stayed closed during the exhibition. A guard would open the door for museum goers over the age of 18 who insisted on peeking inside.

What did the 1960s kids miss? Mildred half-naked on her back, cast in plaster and coated with resin, and chicken wire Harold sprawled on top of her. Beer bottles and clothing scattered everywhere. Country ballads playing on the radio. Kienholz gave his misbehaving teenagers proper wholesome mid-Western names. Mildred and Harold share a head because they are both thinking of the same thing.

Back Seat Dodge '38 is mentioned on our blog - 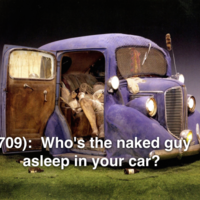