This work was featured in the "Gilmore Girls" episode "The Festival of Living Art" (Season 4, Episode 7) with Rory Gilmore dressed up as the portrait. Her mother Lorelai is the woman in Renoir's The Dance at Bougival.

At the end of World War II, this painting was recovered from Germany, whose troops had stolen it, and returned to the National Museum of Capodimonte.

The title Antea comes from Giacomo Barri, who suggested that this woman was a famous Roman escort named Antea, and that she was the lover of Parmigianino, but there is no evidence to support his claim.

For its first 135 years, this portrait's title was simply Ritratto di giovane donna (Portrait of a Young Woman). 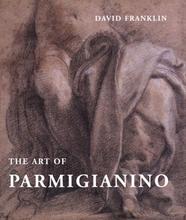 The Art of Parmigianino by David Franklin

In the Rome of Parmigianino's day, courtesans were beloved by many, many people.

135 years after the artist finished this work, Giacomo Barri gave it the name of one of the most famous courtesans, praised by the author Pietro Aretino and the sculptor Benvenuto Cellini, whose name was Antea. What's the difference between a courtesan, an escort, a prostitute, and, as the late Nate Dogg sang in his radio edit of "Area Codes," a "pro"? Nothing at all, it turns out, but the names for the world's oldest job range from the lofty "courtesan," with its close resemblance to "courtier," to the derisive ones we've all heard on your favorite reality show, or a random episode of Maury Povich.

I can't totally fault Barri for publishing, in his "Picturesque Journey of Italy," the insinuation that Parmigianino had a lil' thang going with the famous Antea, and that this picture is the woman herself. No doubt, Barri was just trying to pay the bills with some juicy proto-TMZ gossip, and the ploy worked. But his machinations, like the butterfly effect, have far-reaching consequences when people accept the story without researching it, because it reflects inaccurately on the scant biography of the great Parmigianino, whose tragically short career is full of brilliant works. The juiciness of the story is precisely the "red flag" that writers, luckily, notice, in order to introduce the painting with a big old grain of rock salt about the misleading title. I guess we keep the title the same as a lesson about the effects of gossip, but maybe we should change it back to Ritratto di giovane donna (Portrait of a Young Woman). Another sign that this woman is not Antea is that her apron is a noblewoman's, and the presence of jewels and rubies on her hair and hands are talismans meant to protect the fertility of a young aristocratic bride. Recent research has connected this woman to Ottavia Camilla Baiardi, Parmigianino's friend's niece, and she resembles the features of Parmigianino's Madonna with the Long Neck.

Christina Neilson is on point when she writes that all of our centuries of hemming and hawing about the identity of this particular woman are secondary, as far as the artist's intentions are concerned: Parmigianino wanted to show us the captivating soul of an ideal beauty that anyone could fall in love with.

Here is what Wikipedia says about Antea (Parmigianino)

Antea (also known as Portrait of a Young Woman) is a painting by the Italian Mannerist artist Parmigianino, executed around 1525. The painting is in the collection of the Museum of Capodimonte in Naples, Italy.

Check out the full Wikipedia article about Antea (Parmigianino)