Caravaggio painted a cheeky cherub and found himself in the slammer.

Caravaggio’s Amor Vincit Omnia may seem benign, but the tableau brought him a lifetime of torment. This mischievous god of love drove the painter into a whirlwind of conflict, including a trial, jail time, and an unflattering post mortem biography. The biggest culprit? Caravaggio’s archenemy, the distinguished painter Giovanni Baglione.

Caravaggio’s intentions for Amor were innocent. He had his favorite assistant don some tacky eagle wings, borrowed from Artemisia’s father, and modeled the ambitious work off of Michelangelo’s Victory. The resulting disproportionate portrait would not phase the recipient, the distinguished patron Vincenzo Giustiniani. Vincenzo’s father had ruled the island of Chios until 1566, the last of the Giustiniani dynasty. Likely miffed that he missed out on the monarchy and bored of his obscene wealth, Vincenzo occupied himself with art collection, astronomy, military service, and the construction of luxurious buildings.

Amor Vincit Omnia, or “Love conquers all,” is often interpreted as a straightforward depiction of Cupid triumphing over worldly endeavors, symbolized by musical instruments, armor, a crown, a globe, and a manuscript. Closer inspection reveals a “V,” for Vincenzo, on the pictured sheet music. Could Caravaggio’s carefully curated symbols be references to Vincenzo’s various virtues? This twist would make Giustiniani, not Love, the conqueror of Caravaggio’s masterpiece. Looks like the king of Baroque painting wasn’t above a bit of good old-fashioned ass kissing. Unsurprisingly, Giustiniani adored the work, considering it the crown jewel of his art collection.

Giustiniani wasn’t alone in his admiration. Talented artist Baglione would soon paint Divine and Profane Love, basing his Cupid off of Caravaggio’s. In response, Caravaggio labeled Baglione a plagiarist. Furious, Baglione created a second version in which Caravaggio’s portrait is slapped on Lucifer’s body. The devilish painter is being ripped away from intercourse with young Cupid. The message was all the more pointed due to rumors that Caravaggio and his young assistant, the model for Amor, were romantically involved.

Four hundred years after its inception, Amor Vincit Omnia continues to cause controversy. In 2016, art promoter Desivel was outraged when Facebook blocked his page for posting this very same cherub. Looks like painted-on Renaissance nudity is too scandalous for a 21st century audience.

When you Google 'Amor Vincit Omnia' (love conquers all), this Caravaggio painting is not among the top results. Instead, you'll find lots of pictures of basics with bad tattoos.

In this non-tattoo version, Caravaggio's studio assistant, Cecco Boneri, is happily posing naked as Cupid on a pile of stuff symbolizing the 'all' conquered by love.  Specifically, love conquers music (the instruments), literature (the document), war (the suit of armor), astronomy (more instruments), and...laundry? (the sheet).

This provocatively homoerotic painting caused a huge and very amusing firestorm of controversy in 1602 when Caravaggio's rival Giovanni Baglione decided to take action and paint a direct response to it.  Baglione's counter painting 'Sacred Love and Profane Love' shows Caravaggio as the devil caught either having sex, or about to have sex, with his young studio assistant. The two paintings hang right next to each other in the Gemaldegalerie, Berlin, which proves that German curators have a sense of humor.

Here is what Wikipedia says about Amor Vincit Omnia (Caravaggio)

Amor Vincit Omnia ("Love Conquers All" in Latin, known in English by a variety of names including Amor Victorious, Victorious Cupid, Love Triumphant, Love Victorious, or Earthly Love) is a painting by the Italian Baroque artist Caravaggio.

Amor Vincit Omnia shows Amor, the Roman Cupid, wearing dark eagle wings, half-sitting on or climbing down from what appears to be a table. Scattered around are the emblems of all human endeavors – violin and lute, armor, coronet, square and compasses, pen and manuscript, bay leaves, and flower, tangled and trampled under Cupid's foot. The painting illustrates the line from Virgil's Eclogues, Omnia Vincit Amor et nos cedamus amori ("Love conquers all; let us all yield to love"). A musical manuscript on the floor shows a large "V". It has therefore been suggested also that the picture is a reference to the achievements of Marchese Vincenzo Giustiniani. Giustiniani is said to have prized it above all other works in his collection.

Amor Vincit Omnia is mentioned on our blog - 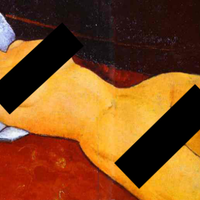 F*** Censorship! Social Media’s Hold on Nudity in Art
Pictures of beaches, fancy dinners, and people “exercising” aside, I’m sure, on the rarest of…

Romantic Artworks to Impress your Lover this Valentine's Day
Whether it’s your favorite excuse to be romantic or it’s just another Hallmark holiday,…
Sign up
Forgot Password
Reset Password