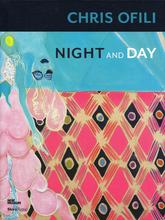 Visitors could heave a sigh of relief to know that this time Chris Ofili’s work was poop-free.

In fact, Afro Muses was made entirely out of water colors and graphite. All totally normal materials. After the controversy storm that he stirred up in the U.S. in 1999 with Princess of the Posse, Chris Ofili essentially disappeared from the American art scene and retired to his home in England. As it turns out, though, he was far from officially retired.

In 1995, Ofili started making his Afro Muse series, completely by accident. At least once a day, either before he started painting in the morning or before he went to bed at night, he would create one image of either a man, woman, bird, or plant. None of the portraits were of anyone in particular. Each was simply inspired by some kind of memory, emotion, impression, or historic event. The series wasn’t meant to be a series when Ofili created it. All it was meant to be was a daily exercise to get his creative juices flowing, hence why he called them his muses.

When a museum curator from the Studio Museum in Harlem came to visit him at his studio, the works spoke to the curator and she asked to put on a show for Ofili and he said sure.

In an interview about the series, Ofili stated that “meaning shifts with context”. Even though the works hadn’t changed, the time and space in which they existed had and this changed the meaning; so these meaningless exercises that he’d worked on for ten years suddenly became a complete collection of miniature works and an introspective on Ofili’s creative process. Because the works ended up in Harlem, they took on entire lives of their own.

It goes without saying that this series of works went over much better than Princess of the Posse did, even with “Harem” in the title and Ofili even admitting that the images were grouped with one man and multiple women on purpose. Because poop is more controversial than polygamy these days.