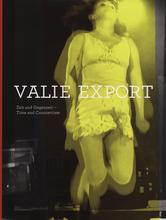 These photographs of VALIE EXPORT commemorate an action that would definitely get you arrested if you tried it at your local Cineplex today.

If you didn't already think she was badass for insisting her name was all caps, get this: The apparently fearless Austrian performance artist cut out the crotch of her pants and walked the aisles of a Munich movie theatre, basically forcing attendants to get a close up look of her hoo-ha. Try not to spill your popcorn when it happens to you!

The idea behind the performance is to challenge the passive imagery of women portrayed in mainstream media. Instead of a seductive siren on screen, people were met with an aggressive lady with crazy hair, giving them exactly what Hollywood more subtly promises. There’s no beating around the bush. You want vagina? You got it! Her action refuses to romanticize the body of the so-called fairer sex and makes the audience come literally face to face with the “object” that drives the cinematic fantasy.