More about a3 blackface #59 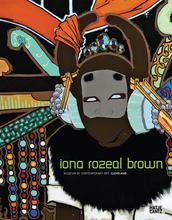 a3 blackface #59 is the direct result of Iona Rozeal Brown being very offended and then rather intrigued by adolescent Japanese blackfacers.

The wildly offensive blackfacing style in mid-90s Japan is called ganguro. These crazy kids would, in addition to painting their faces black, also perm their hair into afros, sag their jeans as far down as possible and wear clip-on dreadlocks. Unaware of the whole minstrel show thing, they did it just to be cool. They were enamoured with African American hip hop culture and wanted to wrap their entire lives around it.

In this particular scene we see a man in his quest for cool. The young man in front is having his hair braided into cornrows by his fine afro’d friend. But as you can see, his friend has minimal braiding skills and is really pulling the bejesus out of his hair. Hence the harsh scowl and the cigar. But how can you not put the fate of your cool into the hands of a man with such a magnificent afro? It wasn’t much of a choice and the man in front just has to endure because afterall, beauty is pain.

It still remains to be decided whether or not this ganguro style is chill or not and it definitely teeters towards unchill. It’s most redeeming quality is that it served as the inspiration for an entire body of work for Iona Rozeal Brown, but otherwise, we're not fans.

Even though blackface is offensive, Iona Rozeal Brown found a beauty in what the Japanese were doing. The Japanese admired African American culture but did it without knowing the history it held.
It is intriguging to see that Iona painted in japanese style as well. The painting also brings out the fact that not only did Japanese dress like African Americans, they went to the extent to paint themselves like them. The painting shows, like Browne said, that they had no real understanding of African American culture. They simply did it because it was trend.
To this day we still see many cultures being appropriated with no real understanding of the background of history of what we are deaming as trendy.
This art piece is intriguing and it continues to show the ignorance that is wrapped in wanting to part take in someones culture.