A prosperously dressed pair of children play with the family pet: cool hat, two florins; eel, one florin; look on the cat’s face after being caught by children using said eel as bait? Priceless! Indeed, the lively character in the cat’s face has made this painting a favorite on modern-day kitty fan websites.

The recently independent Dutch Republic produced a thriving merchant class, among the world’s first bourgeoisie.  Much like today’s American middle class, the Dutch commercial classes had a thirst for all things cuddly and adorable, but they couldn’t spend hours surfing, Youtube so they commissioned art instead.  Genre scenes of the everyday antics of merchant-class children were extremely popular, and one of the few artistic genres deemed suitable for women, so Judith Leyster became the Anne Geddes of her time and made a fortune off such scenes.

But there’s more here than meets the eye.  Genre paintings were often coded moral lessons.  The boy and the girl have dangled the eel before the cat in order to catch it by the tail, and continue to relentlessly tease it in its state of helplessness.  Anyone who's tasted unagi at the Sushi bar knows that you don’t come between a hungry animal and its delicious, tasty eel. Kitty’s got claws, and is poised to scratch its persecutors.  Thus the Dutch proverb, “He who plays with cats gets scratched.”  It’s kind of like the English, “He who plays with fire gets burned,” but two children gleefully burning down a house might have been a tough sell.

Such paintings used children as decoys to poke fun at the bad behavior of adults, so this really may be a condemnation of grown-up jerks.  Perhaps that’s why the kids have such creepy, adult faces.

A Boy and a Girl with a Cat and an Eel is a 1635 oil painting by Judith Leyster that is now in the National Gallery, London.

Wyatt B.
3 years ago

Michelangelo at the Met
One very not cool thing about the Met: it’s on half of the planet’s short-list of things to do in…

Alice in Wonderland's Best Art History Doppelgangers
66 years ago today, the world was introduced to the psychedelic masterpiece that is Disney's…

Looking for luck? Art history is full of it.
Ever wondered about Marie Antoinette’s penchant for roses? Or why Frida Kahlo liked to paint… 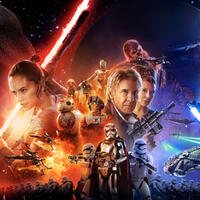 Star Wars Invades Everything (no spoilers)
May the force be with you.So I don’t know about you guys, but I know A LOT of people who are…
Sign up
Forgot Password
Reset Password