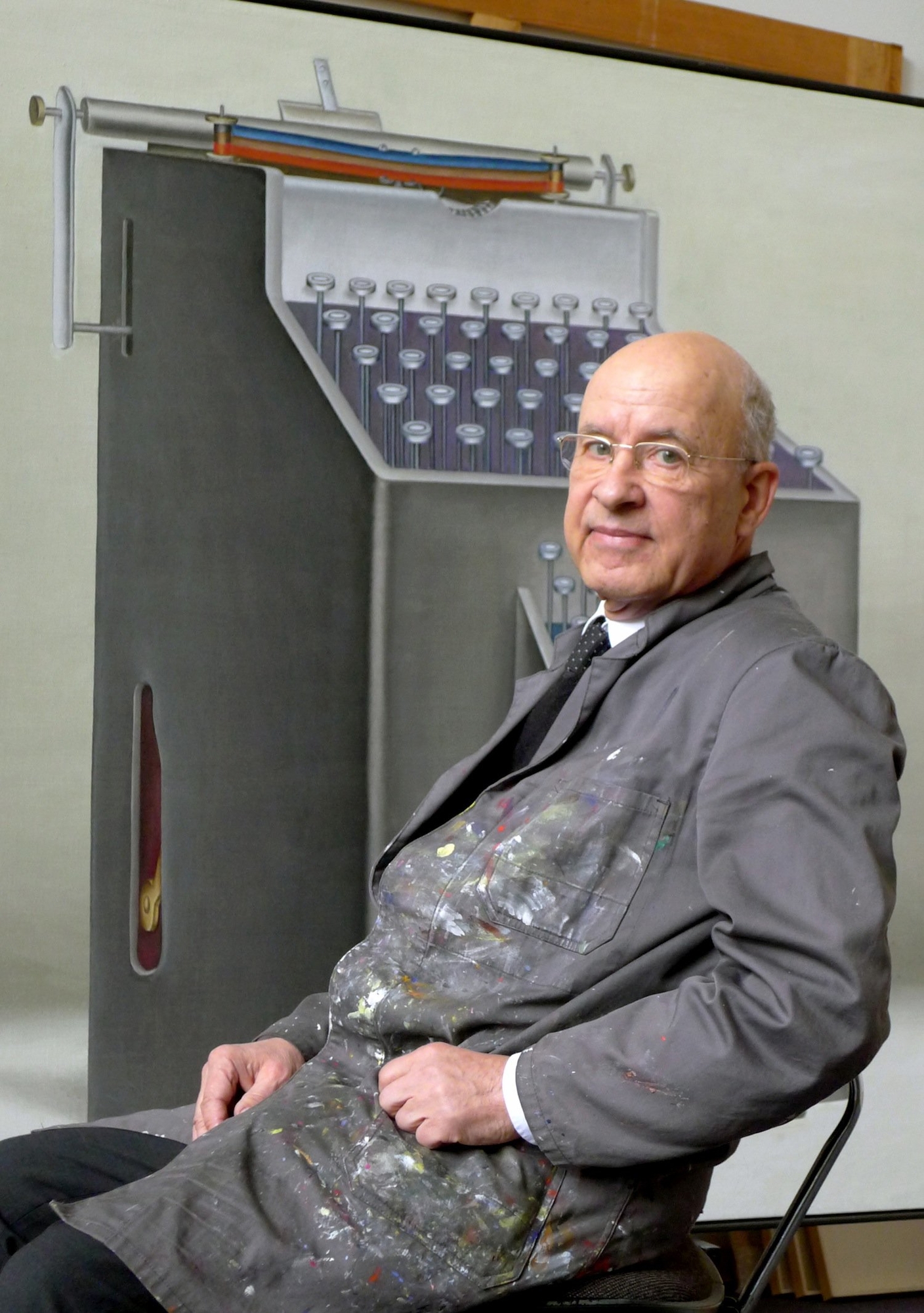 Klapheck's parents worked at the Kunstakademie Düsseldorf, where he studied, and now he works there too.

Klapheck was experimenting with Pop Art in Germany roughly 5 years before Andy Warhol.

Konrad Klapheck is a German painter and graphic artist who studied at the Kunstakademie Düsseldorf.

Klapheck was ten years old at the end of World War II and is still alive today, specializes in both Pop Art and Surrealism. This in and of itself is impressive, but not particularly spectacular for a famed artist. Don’t get me wrong, the German post-war perspective is undeniably unique and breeds some really interesting things, I mean just check out Max Ernst. However these qualities by themselves are not worth writing home about. However they get just a tad bit more notable when you realize that Konrad was into these movements a decade before they had become popular.

That's right, while Andy Warhol undeniably dominated the art scene in the 1960s, in 1955 right after leaving college, Konrad Klapheck was already creating pictures of modern consumer goods. Like Warhol he worked to magnify the trivial. His first major works were incredibly precise sketches of simple mechanical objects; typewriters, showerheads, and sewing machines. Later he would take this another step forward and incorporate surrealism into his work, further enchanting the everyday. André Breton, one of the founders of Surrealism, described Klapheck's method with this quote, “towards the machines, Klapheck adopts the attitude of the magician.”

This becomes more interesting when we take into account Konrad Klapheck’s artistic background. The truth though that Klapheck not only had one parent that worked for the German art academy in Düsseldorf, but two, so it was likely he was a shoe in. Moreover when he was there, instead of meeting resistance to his work, he was encouraged by his professors to pursue his unique craft. He currently teaches at this same Academy. Often Pop Art, and Surrealism are seen as forms that break the mold, and so one might think that Klapheck was some big anti-establishment artist, when clearly he was literally born and raised in the art establishment. But I suppose that is about as anti-establishment as you are going to get from a time and place that not but two decades earlier had defined the term “facist."

Here is what Wikipedia says about Konrad Klapheck

Konrad Klapheck (born February 10, 1935) is a German painter and graphic artist whose style of painting combines features of Surrealism and Pop art.

He was born in Düsseldorf. From 1954 to 1956 he studied painting under Bruno Goller at the Kunstakademie Düsseldorf. Klapheck's works of the mid-1950s are in a magic realist style that became more idiosyncratic when he painted the first of his typewriters. His subsequent paintings, often large in scale, are precise and seemingly realistic depictions of technical equipment, machinery and everyday objects, but strangely alienated; they are "monumental, amusingly absurd and sexually suggestive".

Klapheck's subjects through the years have included (in order of introduction) typewriters, sewing machines, water taps and showers, telephones, irons, shoes, keys, saws, car tires, bicycle bells and clocks. Influenced by Duchamp, Man Ray, and Max Ernst, Klapheck's "ironic treatment of everyday mechanics" prefigures Pop art in its magnification of the trivial. He was also close to French Surrealism and André Breton wrote his last published text about a Klapheck's exhibition at Galerie Sonnabend in 1965.

Between 1992 and 2002, he has painted friends, colleagues, and celebrities from the international art scene. He became a professor at the Kunstakademie Düsseldorf in 1979.

Check out the full Wikipedia article about Konrad Klapheck