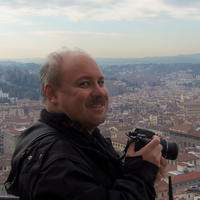 Don was born in suburban Los Angeles, but grew up in the San Francisco Bay area. He later moved to Seattle and then returned to school as a “non-traditional” student at the University of Washington, where he earned a degree in Art History and a Master’s in Museum Studies. He likes to travel and in his spare time he can be found working on old cars and practicing his photography.

What is your favorite city to visit?

If you could have your portrait made by any artist, whom would you choose, and why?

Vincent van Gogh because I love his work and he led an interesting life.

What is your favorite museum?